DESCRIPTION: I observe a red to blue color change when I rinse my bowl after eating frozen blueberries. Sounds like an acid-base reaction, doesn’t it? Read on to learn about the blueberry surprise!

INTRODUCTION: I often eat frozen blueberries for breakfast. When I do so, I notice that the blueberries leave a red-purple residue in the bowl. This color of the frozen blueberry residue is due to the presence of anthocyanins and anthocyanidins (Figure 1)1-3, which impart red, violet, and blue colors to many parts of plants: stems, leaves, fruits, and flowers.1-7 (For the rest of this post, both anthocyanins and anthocyanidids will collectively be referred to as AC). For quite some time now, I have noticed an interesting color change when I rinse my bowl with tap water after eating frozen blueberries. When doing so, the residue left from the frozen blueberries changes from red-violet to blue-violet (Figure 2). 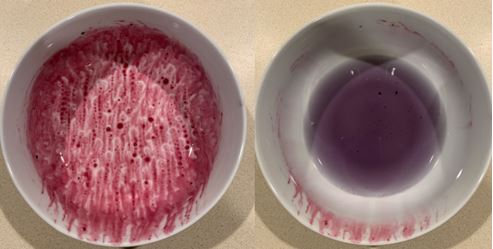 When I first noticed this color change several years ago I reasoned that the blueberry residue changed color because of a change in pH upon addition of tap water. It is well known that AC molecules change color with pH4-7 so I simply assumed a pH change was occurring (Figure 3).

Figure 3: Simplified description of changes in structure in anthocyanins and anthocyanidids induced by increases in pH (indicated from left to right). These structures tend to impart (from left to right) red, violet, and blue colors. The full range of reactions involving pH-induced color changes is beyond the scope of this article.

Over the years I have become increasingly skeptical of the explanation that a shift in pH causes the color change I see upon rinsing my blueberry-stained bowl. That’s because blueberries tend to be acidic, so a mixture of blueberry residue and tap water is likely to be acidic. But AC molecules tend to be red or violet in solutions that are slightly acidic to acidic (Figure 2). How could blueberry residue turn blue in an acidic environment?

I decided to run several tests to try to figure out how the blueberry residue could be changing blue when rinsed with tap water. You can see the culmination of these investigations in the video below:

PERFORMING THE EXPERIMENT WITH HOUSEHOLD ITEMS: You can perform the experiments seen in the video quite easily by using only items obtained around the home or at the grocery store. To do so, frozen blueberries are placed in a clear or white container. The container is shaken to deposit blueberry residue on it. After the blueberries are removed, a small amount of distilled water is added. Next, salts from various common sources (Table 1) are dissolved into the blueberry residue/water mixture. When doing these experiments I noticed that some of the metal ions from household sources induced color changes not observed in the experiments shown in the video.

Table 1: Descriptive results of experiments in which salts containing metal ions from various common sources were added to a mixture of frozen blueberry residue and distilled water

DISCUSSION: In the video it is demonstrated that it is not only pH, but also metal ions that can cause AC molecules to change color. Thus, it could be that metal ions in my tap water bind with AC compounds to cause the blue color. I am not certain exactly which metal ion(s) and AC compounds interact to cause the blue color. Nevertheless, I did observe that copper ions induced a color change in blueberry residue strikingly similar to the color change caused by addition of tap water. I will note that some studies have indicated that when AC molecules bind to Cu2+, a shift to a bluer color appears.8-11 However, the blue shift seems to be more commonly observed upon interactions between AC molecules and Al3+, Mg2+, Ca2+, and/or Fe3+.4,5,12-14

The associations of metal ions with AC molecules often involve the formation of beautifully complex structures that involve as many as 12 individual AC molecules. In addition, molecules that are similar to AC, called flavones, are often involved in these intricate structures. The process of two or more AC molecules interacting is termed copigmentation, which is often accompanied by color change. Interactions leading to copigmentation can be mediated by metal ions and/or intermolecular forces between AC molecules (Figure 4).4-5,7,12-14

CONCLUSION: Who would have thought that the simple red to blue color change I observe when washing my dishes could involve such intricate chemistry? The beautiful nature of chemistry never ceases to amaze me. I hope you enjoyed learning about this “blueberry surprise” as much as I did. As always, feel free to leave a comment if you and your students try some of these experiments on your own – especially if you learn something new or observe something that makes you think my explanations might be wrong!

I really enjoyed that discussion. I'm wondering where the copper ions are coming from? Are they leaching from the pipes, leaching from brass fittings?  It would be interesting to check people's water from new houses where all of the plumbing is pex. (sp)  Would that also have copper ions just because of the fixtures, or would the amount go down enough to have no effect on the blueberries?

Having said all this (and even though my experiments indicate Cu2+) I’m still not entirely sure the effect I’m observing is from Cu2+. First, I have a water softener which should remove a lot of the metal ions (including Cu2+) that could complex the anthocyanins. Also, several metal ions or mixtures of ions commonly found in tap water (Mg2+, Ca2+, Fe3+) can complex with anthocyanins and anthocyanidids. Thus, there are a variety of scenarios that could be causing what I’m seeing. You’ll note that in my experiments I only tested individual ions – but not mixtures of ions – with the blueberry mixture. You’ll also notice that I didn’t carefully control for added metal ion concentrations in my experiments.

So while it’s a fair explanation that Cu2+ is causing the effect, I’m not completely sold on the idea. Hopefully I’ll be able to carry out some more experiments to gain more insight into what is going on. Any suggestions you have for tests are welcomed!

Thermochemical Analysis of the Devil's Milkshake