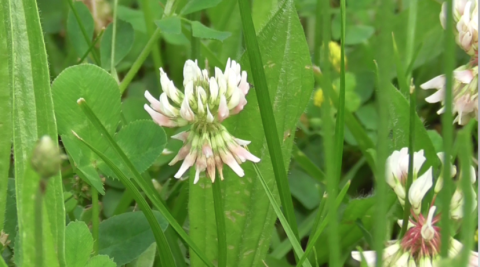 Figure 1: White clover. Slight pink and purple color can be observed in the florets.

I set out to extract anthocyanins from white clover by first collecting about 30 white clover samples in a bowl. Next, I added a quarter cup of tap water, and heated the flowers in a microwave for one minute. When I removed the bowl from the microwave and poured off the water, I saw no indication of pink or purple color – no anthocyanins. Instead, I was quite surprised to see that the water had taken on a deep yellow color (Figure 2, Video 1). On a whim I decided to add some vinegar to the yellow-colored mixture. Upon doing so the yellow color disappeared. Adding baking soda to the colorless mixture caused the yellow color to reappear (Video 1). I found that I could cause the yellow color to appear upon addition of a variety of household bases and disappear upon addition of several household acids. While I was unsuccessful in extracting anthocyanins from white clover, I had nevertheless discovered that the white clover contained an acid-base indicator, after all! But where did this colorless-to-yellow acid-base indicator come from? 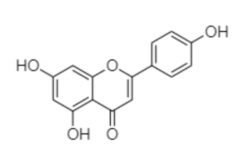 You can see some of my explorations I did with white clover below (Video 1).

In the future I’m hoping to carry out some other investigations with other white-colored plants that might contain anthoxanthins, such as daisies or cauliflower. I’m also hoping to use white clover as a source of an acid-base indicator in my classes from time to time. If you try some similar experiments with white colored plants and flowers and learn anything new, please be sure to let me know in the comments.

1. See Kuntzleman, T., Berries are red, berries are blue…I’ve got a berry surprise for you!, ChemEd X, 2020 and references therein. These observations are very interesting! Thank you very much for posting.  I have had a try using your procedure, although the clover flowers I could find had a much stronger purple colouration so there are likely some anthocyanins present in my sample.

The red colour of the HCl and acetic acid samples are likely due to anthocyanins from the purple material in the petals. The particularly interesting results are the Ferric chloride test and addition of hydroxide. The dark coloured solution on addition of Fe3+ and the brown solution with hydroxide (aged in air) could also be evidence for the presence of anthoxanthins. I found similar observations reported in 1897 with samples of isolated apigenin (for further detail see work by A. G. Perkin FRSE https://pubs.rsc.org/en/Content/ArticleLanding/CT/1897/CT8977100805#!div...)

I think the clover extraction observations might also explain some of the flower observations we saw last year. in many cases, fruit and vegetable extracts gave blue or violet solutions when iron salts were added, but many flowers gave black/dark green solutions, so perhaps the flowers are a richer source of anthoxanthins? Lots of really interesting chemistry here! 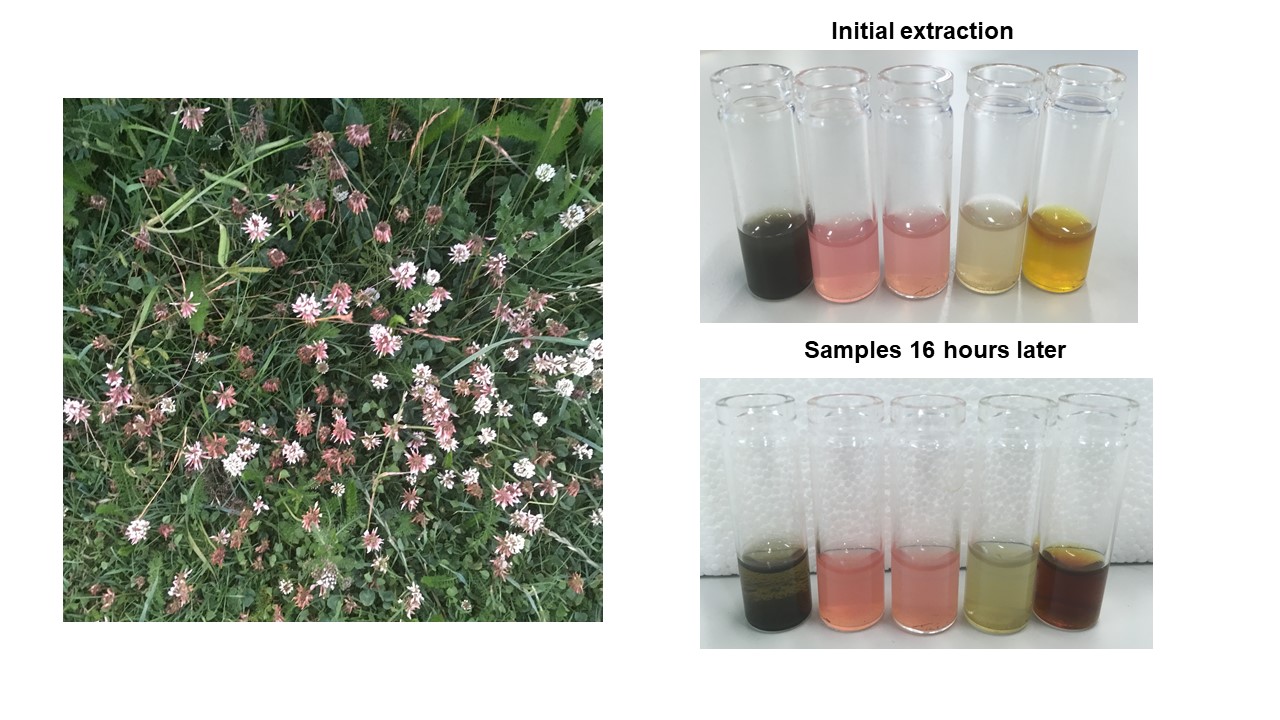 Wow Iain, thank you for sharing your explorations in some extensions to the clover chemistry experiments. I appreciate you alerting me to the hydroxide test for the presence of anthoxanthins. I always enjoy hearing about your work with various plant pigments. I, too, have noticed a slight pink color in some of the white clover around my home. In fact, I often noticed a slight pink tinge when my clover extracts were acidified. However, the clover you share in your pictures has a LOT of pink in them. Indeed, some anthocyanins are also present in white clover. I always appreciate your input, my friend.

I managed to find some clover that was less purple in colour, the flowers look more like the ones you had. Pleasingly, the results this time align with yours. The yellow colour disappears with acid and forms again when sodium bicarbonate is added. I don't know why our local clover was so purple, I travelled a bit further from the coast when I found these examples. The Fe3+ test works well with these too. Just like your blueberries article last year, this is another great home investigation to try! Beautiful work, Iain. Thank you for sharing these explorations with us.