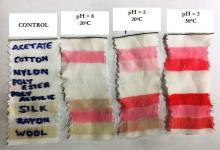 Each year, I try out some experiments that connect to the annual National Chemistry Week (NCW) theme. The theme for NCW this year is “Forensics: Solving Mysteries through Chemistry: Focusing on the chemistry of fibers and forensics”. Based on this description, I decided to spend some time experimenting with dyeing fibers. Through various tests and readings, I learned that the process of dyeing fibers is intimately connected to intermolecular forces. So much so that I hope to create a laboratory exercise for my college students to dye several fabrics under varying conditions and use the concept of intermolecular forces to explain observations. 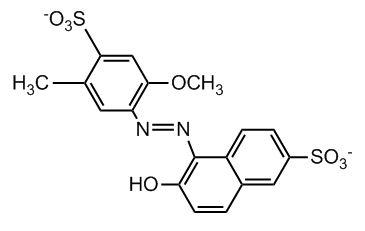 In one such experiment, it was noted that allura red strongly dyes cotton, which is comprised of cellulose (Figure 2).

The strong dyeing of cotton by red dye #40 can be explained by comparing the molecular structures of red dye #40 and cellulose. Inspection of the structure of red dye #40 shows that this dye has two negatively charged sulfonate (-SO3-) groups, and a single hydroxyl group. Cellulose, which is a polymer of glucose monomers, contains a large number of hydroxyl groups. Thus, one would expect strong hydrogen bonding between the hydroxyl groups on both the dye and cellulose molecules. In addition, strong ion-dipole forces potentially exist between the sulfonate groups on the red #40 and the hydroxyl groups on the cellulose chain. These intermolecular interactions do a good job of explaining why cotton is strongly dyed by red #40.

If you would like to see how I carried out my experiments, check out the video below. Within the video, I explain how I explain the extent of dyeing observed when all eight fibers are treated with the red dye #40. I’m not certain my explanations are entirely correct, so I’d appreciate hearing any comments you might have about my analysis. I would also appreciate if people would attempt to dye these various fibers under other conditions. I’ve tried a few variations on my own, like using McCormick food dyes or other flavors of Kool-Aid as sources of dyes. If you learn something particularly interesting, please share it with me! I’m hoping to include this new laboratory idea of mine next semester, and I would appreciate having several variations for my students to explore.

We are using six-fabric strip from Flinn Scientific and plain red dye.  Here are some of the questions that students asked:

Is the temperature affecting the position of the equilibrium? (we will try basic solution at higher temperature)

Would other components in Kool Aid affect the dyeing process?  (how does your experiment with plain dye compare?)

Might do more tests as a student-driven project.  Great lab activity and works well with the current topic!

Thank you for your input. I think your students bring up some interesting questions, many of which I can't fully answer at this time. The ingredients in strawberry Kool-Aid are citric acid, salt, red 40, calcium phosphate, ascorbit acid, natural & artificial flavor. Citric acid, ascorbic acid, and calcium phosphate are going to affect the pH, which of course will affect binding. I'm not sure how the flavorings will affect the binding, given that I don't know the chemical identity of these substances. Of course we could test this by purchasing some pure allura red and seeing how it dyes the fibers under the same conditions tested with Kool-Aid.

I would say that temperature is going to affect equilibrium in this experiment. However, I'm having difficulty predicting how this will pan out. That's because we have a lot going on in this system: binding of dye to fibers, unfolding of proteins (in the case of wool and silk), partioning of dye between the water and fiber, etc. I think your students make an interesting suggestion to try the experiment at pH = 8 and higher temperature. My guess is that you will get more binding at this pH at increased temperature. Because I only ran my dye bath for 1 minute (likely not to completion), there are likely temperature related kinetic effects that must be taken into account, too.

Regardless, I'm interested to know how things work out for your students, so be sure to tell me the results of your experiments! 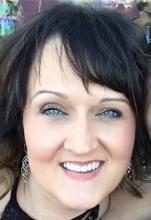 I was wondering if you have found a reliable method for quantitative color analysis of the fabric. Any input would be appreciated.

Hi Tracie: What a fantastic idea you suggest!! I'm almost certain you could use the app called "Colorometer" (for iphone) to do this. On an Android, try using "ColorMeter Free". Both of these apps are free. Be sure to let me know how things work out if you try this!

In your opinion could this lab be adapted for use in a high school chemistry setting?

I would guess that you could better answer your question than I, given that I have just a tad bit of experience teaching high school students. Also, I am not extremely familiar with the high school chemistry curriculum. Nevertheless, it is my opinion that the sophistication of almost all experiments can be adapted to foster student understanding at any level Pre-K on up. To what kinds of chemistry topics were you hoping to expose your students by doing this activity?

My students will have no prior knowledge of IMFs and I will have to eliminate any discussion of structure as well. I plan on trying this in December so I will let you know of any modications. This video helped me so much in writing my lab report for my Organic Chemistry 2 lab report on azo dyes! Thank you so much. I made an account just so I could thank you because I've been researching for hours trying to write this report

Hi Charisma, how nice of you to take the time to let me know the blog and video was helpful! Thank you!