The 2020-21 academic year, with its pandemic-induced social distancing measures, produced many challenges in the implementation of laboratory-related activities. At Bradley University, many chemistry lab activities forced to move to an online format. One activity that went online was the classic coin-flip exercise to demonstrate the first-order kinetics associated with radioactive decay. This rather simple exercise meshes well with discussions of kinetics and nuclear chemistry explored in General Chemistry courses, and can readily be used in other academic settings, such as high school. This lab activity placed the coin-flip exercise in the context of the tragedy of the “radium girls”. These were a group of young women who worked in factories painting clocks and instruments with radium-containing paint and suffered illness and death from radium contamination.1-3 Study of the history and chemistry of this event provides opportunities to make connections to toxicology, green chemistry, and sustainability.

In the introduction to the lab activity, students are given a very brief introduction to the radium girls story and its connection to Ottawa, IL (in central Illinois located about an hour or two from Bradley University). The students are then directed to visit the internet for more information,3 such as a video made at a memorial to the affected workers located in Ottawa, shown below.

Video 1. Description of radium in phosphorescent paint and its impact on the workers doing the painting. Video shot at the Radium Dial Memorial in Ottawa, IL. ChemDemos YouTube Channel (accessed 12/7/2021)

The coin-flip exercise is easily done with coins or puzzle pieces or other small two-sided objects that can be flipped back and forth. Modeling chemical kinetics and equilibria with small objects has been used in related contexts.4,5 In this exercise, one side of each object (e.g., “heads” on a coin) represents an undecayed radioisotope, and the opposite side (“tails”) represents the isotope that remains after the nuclear decay has taken place. The equation for this model of radioactive decay is simply:

In the activity, students shake a population of coins starting heads-up in a container (or flip a single coin many times), and approximately 50% of those coins land heads-up. The number of heads remaining again represents undecayed radioisotopes and is recorded by the students. The students set aside the tails-up coins, and shake the remaining heads-up coins. Again, approximately 50% of these coins land heads-up and are counted. The tails-up coins are again removed. This sequence of shake, record, and remove goes on for multiple trials. Students are asked to explain which trials tended to give ratios closest to 0.5: those with many flips, or those with just a few flips. In many cases, but not all, the data support the idea that more flips produce ratios closer to 0.5. By the end of the exercise, students will have a set of data to graph that shows number of heads-up coins at the beginning of each trial as a function of the trial number. The resulting graph will show a first-order decay, with a half-life equal to the interval from one trial to the next.

Students are next asked to use a periodic table to calculate how many protons, neutrons, and electrons are in a radium-226 ion (88, 138, and 86, respectively) and name what group in the table radium can be found (Group 2, alkaline earth metals). Students are asked to calculate what isotope is produced when a radium-226 nucleus loses an alpha particle7 containing two protons and two neutrons (radon-222). From the radiation safety data sheet, students are asked to find which critical organ in the body is most impacted by ingestion of radium-226 (bone tissue) and then to name the Group 2 element commonly found in bone tissue (calcium). The activity notes that this element and radium can each combine with phosphate and other ions in the human body. Apparently the human body is not very discriminating between those two ions.

A recently-developed additional exercise that has not yet been used in this laboratory activity is to model the similarity between calcium and radium in the human body by using precipitation reactions. Bone minerals are largely comprised of calcium cations and phosphate anions,8 so the water-insoluble compound calcium phosphate can be thought of as a simple model for bone minerals. Students can combine small amounts of cation solutions and phosphate anion solutions to look for the formation of other insoluble ionic compounds. The implication is that cations that form these insoluble phosphates could also be deposited within human bone tissue. Figure 1 shows the results of combining drops of various cation-containing solutions and drops of phosphate anion-containing solutions on a plastic-covered precipitation worksheet. The formation of the white insoluble compounds shows up readily against the black squares of the worksheet. 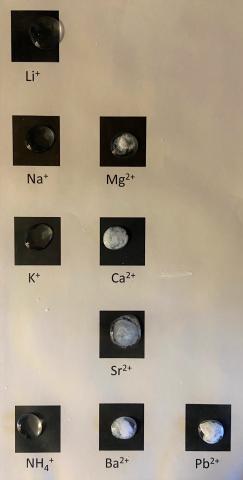 The following observations were made for the cations added to phosphate anions, and whether a precipitate was observed:

Since this lab activity is designed to potentially be done online, a video of these precipitation reactions in test tubes has been recorded as a YouTube video (below). Some combinations precipitate solid ionic compounds, which appear as persistent cloudiness in the test tubes. The order of the cations added in the video are scrambled relative to the order provided above, in order to give students experience in working out reactivity patterns themselves. Online or in-person, radium is too radioactive to be reasonably used in a General Chemistry setting, so the students are asked to record their precipitation observations from the combinations in the video and are then asked to extrapolate the behavior of radium ions from these observations.

Looking at these data, even if the ions are not arranged in this order, students are expected to discern that cations with 2+ charge form insoluble compounds when combined with phosphate anions, in contrast to many 1+ cations. From this pattern, students should be able to predict that radium cations, with their 2+ charge, should form a precipitate. It should also be noted that other hazardous cations, such as lead(II) cations or radioactive strontium-90 cations, will also form precipitates when combined with phosphate anions. All three of these cations can also make their way into human bone tissue.1 An additional environmental connection from these reactions can be made between the lead(II) phosphate precipitation reaction and the recent water supply crisis in Flint, MI. The water conditions which influence the solubility of this compound played a role in influencing the concentration of lead species in the drinking water.9

In the activity, students are next asked how the radium in the paint of the factories was ingested by the workers, to which they can respond with a description of how the workers drew paintbrushes contaminated with radium-containing paint across their lips to make sharp brush points. With a reminder that the half-life of radioactive decay processes cannot be altered by traditional chemical methods, students are guided to note that the half-life of radium-226 accumulated in the human body or in factory sites contaminated with radium or in other locations is still 1603 years. This makes cleaning up radium-226 contamination quite challenging.

The final portion of the lab activity asks students to connect what happened in Ottawa and elsewhere to the growing field of green chemistry and to even larger issues of sustainability. The students are instructed to examine websites describing the 12 Principles of Green Chemistry and the 17 United Nations Sustainable Development Goals.10,11 Then they are to each select one Principle of Green Chemistry and one Sustainable Development Goal and describe in a paragraph how the use of radium-containing paint a century ago would be in conflict with the principle and the goal selected. Potentially relevant Green Chemistry principles include 1. Waste Prevention, 3. Less Hazardous Chemical Synthesis, 4. Designing Safer Chemicals, 10. Design for Degradation, and 12. Safer Chemistry for Accident Prevention. Potentially relevant United Nations Sustainable Development Goals include 3. Good Health and Well-Being, 5. Gender Equality, 7. Affordable and Clean Energy, and 12. Responsible Consumption and Production.

The Supporting Information associated with this blog post contains a file designed for students to use for this activity. It is hoped that in this activity, whether done online or in a laboratory setting, students will gain greater insights into topics of kinetics, radioisotopes, precipitation reactions, toxicology, and green chemistry/sustainability, all in the historical context of a tragedy that will hopefully never be repeated.

Safety Done as an online activity with only coin flips and YouTube videos, the lab is very safe. If phosphate compound precipitation reactions are to be done in-person, then the instructor must identify and respond to potential hazards, personal protective equipment, and disposal issues associated both with the phosphate anion solution and each of the cation solutions.

Acknowledgements This work was supported by Bradley University and the Mund-Lagowski Department of Chemistry and Biochemistry with additional support from the Illinois Heartland Section of the American Chemical Society and the Illinois Space Grant Consortium. Thanks to all the lab instructors, assistants, and students who worked with this experiment in their lab course.

Amazon Purchasing this item using the link below provides support for ChemEd X. Thank you.

I love this activity and cannot wait to try it.  It has so many fantastic features.  The history portion provides a great relavance.  Students can do some of this at home with research included.  There is an easily adaptable microscale portion.  Also, I could see using this to either introduce topics or to revisit topics we have done.  I also like the portion with green chemistry.  A great idea to plant this seed with future chemical engineers.  Please continue to share future activities.  I think this one is going to be a keeper for me.  Thanks again. 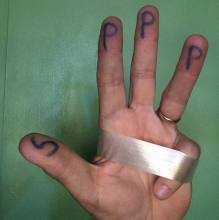