Packing peanuts, those polymer foam nuggets used as padding for shipping many different items, were first produced by The Dow Chemical Company in 1965.1 They are readily available in many places, and their properties are well known to many people. This provides the opportunity for the peanuts to be used for a variety of demonstrations which exploit their properties. Packing peanuts were originally comprised of polystyrene foam, and many still are, though many contain recycled polystyrene.1 Packing peanuts comprised of starch (from corn) were first produced in 1991 by the Evergreen Company.1 Many people are familiar with the general properties of these peanuts, which result from their chemical composition and structure. Having both polystyrene and starch packing peanuts available makes for many simple demonstrations. The polymers from which these peanuts are comprised are represented in Figure 1.

Polystyrene (which turns 90 this year)2 is comprised only of carbon and hydrogen. It is a hydrocarbon. It is formed from addition polymerization of other hydrocarbons, and it is sourced from petroleum (pretty much just hydrocarbons). It is nonpolar, and thus can be dissolved by nonpolar solvents but not water, and it often lacks biodegradability. In almost complete contrast to polystyrene is starch. This polymer, comprised of carbon, hydrogen, and oxygen, has been around for a VERY long time. It is a polysaccharide, formed from condensation polymerization of other sugars, and is sourced from biomass. It has polar regions in its structure and can form hydrogen bonds. It can absorb moisture and be dissolved by water, and it often has at least some biodegradability.

Perhaps the very simplest demonstration that can be done to compare the two different types of packing peanuts is to pick each one up and try to break it up be rolling it between the palms of two hands. The polystyrene peanut breaks up easily, often leaving bits that can carry static electrical charges that cause them stick to hands and other objects. The all-hydrocarbon polystyrene packing peanut is a good insulator. By contrast, starch peanuts often do not tend to break up to form statically-charged bits, which could be related to moisture in the polymer. Starch packing peanuts stored for a time in a vacuum desiccator seemed more brittle than those that were stored in ambient air. Research has shown that the moisture content of the starch appears to impact its ability to disperse static charge.3 This very simple demonstration of breaking polystyrene into smaller bits provides the opportunity to segue into discussions about microplastics. Microplastics are small but often visible bits of polymers, having an average size less than 0.5 cm.4 One of the challenges associated with microplastics is their persistence in the environment, which brings into consideration their ability to be disintegrated, as discussed in the demonstrations described below.

Perhaps the most well-known difference between polystyrene and starch packing peanuts is solvent solubility. The solubility difference between the polymers in environmental conditions provides a point of introduction to the Twelve Principles of Green Chemistry.5 Acetone or other non-polar solvents will spectacularly dissolve polystyrene and polystyrene foam. My father has told me the story about when he used to print maps for the Army about 50 years ago, when there were those who would send new workers to collect organic solvents for the ink using polystyrene foam cups. Those new workers would not get very far before the solvent dissolved through the cups! Partially-dissolved polystyrene can be sticky, so a small amount of acetone can be used to solvent-weld polystyrene packing peanuts together. Dramatic dissolution or solvent-welding can also be achieved for starch foam peanuts, with the critical difference that water is the solvent of choice. One product that capitalizes on the ability to use water to solvent weld colorful starch foam peanuts is Magic Nuudles.6 With the use of starch instead of polystyrene and water rather than organic solvents, unwanted packing peanuts can be eliminated. This prevents packing peanut pieces (e.g., microplastics) from accumulating in the environment. The specific principles from the Twelve Principles of Green Chemistry that can best be highlighted include 5. Safer Solvents and Auxiliaries and 10. Design for Degradation.5 Another aspect of Green Chemistry is reducing the risk associated with the use of particular substances by reducing the hazards associated with the substances. Video 1, called “Risk = exposure x hazard using packing peanuts and microplastics” has been available on YouTube. The video was shot near a local creek and discusses risk, exposure, and hazard in the context of microplastics and packing peanuts.

Video 1: Discussion of risk, exposure, and hazard in the context of microplastics and packing peanuts. ChemDemos YouTube Channel (accessed 7/19/2021) 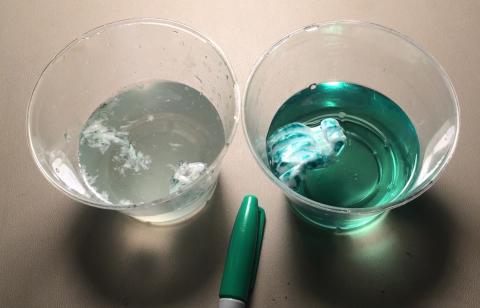 In contrast to a polystyrene packing peanut, a starch foam peanut does not shrink in liquid nitrogen. It does, however, become very brittle. Crushing a starch packing peanut with a wooden block at room temperature easily squishes it more flat but does not significantly break it. Soaking the peanut in liquid nitrogen for about ten seconds and crushing it with a wooden block or a shoe makes an interesting hissing/splatting/crushing noise as the starch structure breaks into small pieces and the liquid nitrogen is released. Video 4 shows this demonstration, and Figure 3 shows a starch foam packing peanut after soaking in liquid nitrogen and being crushed to a powder by a wooden block. Production of the powdered starch bits could also serve as a segue to discussions of microplastics and interconnecting with the demonstrations described above. It seems likely that the powdered starch would dissolve easily into water, in contrast to polystyrene foam bits. 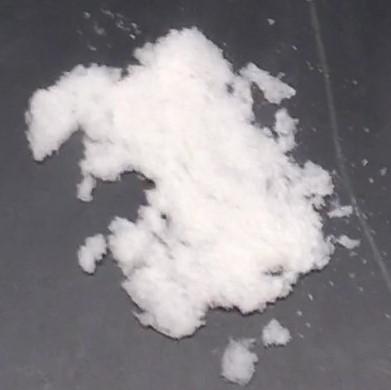 Figure 3: Starch foam packing peanut after soaking in liquid nitrogen and being crushed to a powder by a wooden block.

Finally, another simple demonstration is to compare the interaction of both of kinds of peanuts with iodine solutions. Iodine in polar solutions (e.g., in yellow-brown povidone-iodine solutions) tend to be brown-yellow in color. When iodine interacts with nonpolar areas of starch, it produces a blue-black color.7 This can be shown by marking a starch packing peanut with an iodine-based counterfeit currency detection pen.8 These pens leave yellowish marks on dollar bills, which do not contain starch-like compounds, but leave very dark marks on typical paper, which do contain starch-like compounds.9 Figure 4 shows counterfeit detection pen marks on both polystyrene and starch peanuts. The mark on the polystyrene peanut remains yellow, whereas the mark on the starch peanut turns black. Similarly, a starch peanut touched to povidone-iodine solution turns dark but a polystyrene foam peanut soaked in the solution stains the same brown-yellow color as the solution. This does beg the question, if iodine turns dark colors in nonpolar regions of starch, then why does it not turn dark in nonpolar polystyrene? The answer likely lies in the inability of the polar iodine solutions to penetrate the polystyrene peanut surface. 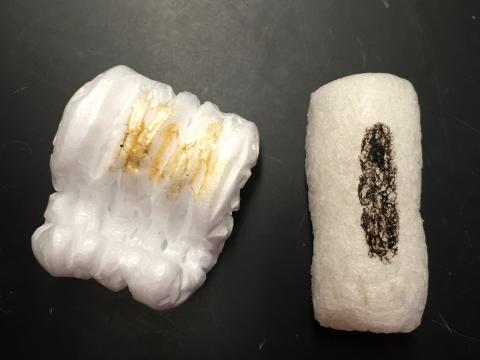 To conclude, there are number of differences in the properties of the starch and polystyrene foam packing peanuts shown using these demonstrations.

Many of these demonstrations can be interconnected under the theme of microplastics, making these common objects known for decades also useful for illustrating current environmental and Green Chemistry issues.

All solution containers should be clearly labeled. Precautions, including proper personal protective equipment such as goggles, should be used when working with solvents and iodine solutions. Avoid spilling the solutions on clothing. Avoid skin contact and wear gloves while working with the solutions. Always wash your hands after completing the demonstrations. The very cold temperatures of liquid nitrogen can produce frostbite, so do not handle the cold packing peanuts with bare skin – use tongs. For the starch foam peanut in liquid nitrogen experiment, protect your eyes from flying bits of cold starch powder.