I decided to test some other decorative beads that are sold as “pyrite nugget” (Figure 1). Given the name, I figured it was likely that these beads contain the mineral pyrite (or iron pyrite). I have found that testing these beads for the presence of iron pyrite is another potential activity fitting with the “Chemistry Rocks!” theme. 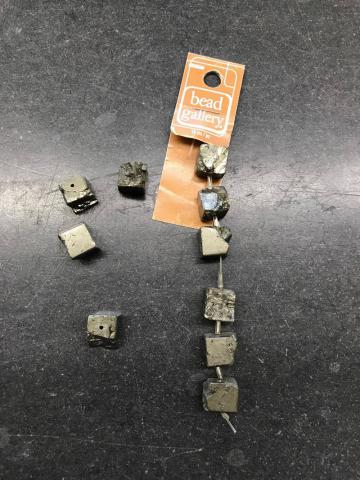 While the density of these nuggets is consistent with them containing pyrite, I nevertheless decided to further test the pyrite nuggets for additional evidence that they did indeed contain FeS2. I pulverized the beads and placed the resulting powder in the flame of a blow torch. This was done to see if I could detect a pungent odor, indicating the production of SO2(g) by pyrite oxidation at high temperature:1

A pungent odor was easy detected, so it is advisable to carry out this experiment in a hood or very well ventilated room. I also tested the burnt residue for the presence of Fe2O3, which is much more strongly attracted to a magnet than FeS2. In yet another test, I placed the powder in a blow torch and plunged the hot material into water containing a small amount of base2 and phenolphthalein indicator. This was done to test for the production of H2SO4 in the reaction between iron pyrite, oxygen and water at high temperature:3

You can see how I carried out these tests in the video below:

As you can see in the video, I was able to collect a lot of evidence that the “pyrite nuggets” do indeed contain FeS2. If you have any ideas for experiments to conduct during NCW, please share them with me in the comments. I would love to hear what kinds of things you are doing in the lab.