I recently developed a demonstration that I’d like to call “The Chemical Laser Show”. I stumbled upon the procedure as I was trying out an experiment reported in the Journal of Chemical Education.1 The original experiment involves shining a green laser through iodine vapor (I used a green laser pointer with a wavelength, l,  of 532 nm). When this is done, the laser light appears to shift to a yellow color as it passes through the iodine gas (Figure 1, left). This emission of yellow light is a case of fluorescence, where an electronically excited molecule releases light.

To generate the iodine vapor for the experiment, I simply placed a few crystals in the bottom of a beaker, which I then placed on a hot plate.2 The “laser show” unexpectedly occurred when the iodine vapor began to crystallize on the sides of the beaker. The crystals caused the laser beam to scatter, which created a really nice effect (Figure 1, right). The “laser show” was best viewed in a very dark room, whereas the yellow fluorescence was easier to see with the lights on in a dimly lit room. 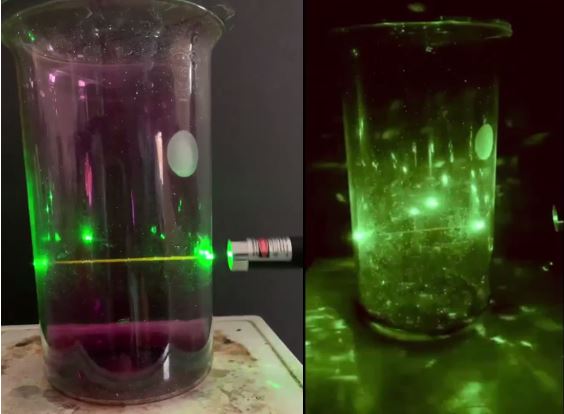 Figure 1: (Left) Light from a green laser appears to shift to a yellow color when it passes through iodine vapor. (Right) The same experiment when viewed in a very dark room, after iodine crystals have formed on the sides of the beaker.

In the video below you can watch how to set up and carry out this experiment. You can also see a discussion of a few chemical topics that connect to this particular experiment.

In what follows I’ll discuss some of the chemical concepts associated with this experiment. First, there are quite a few phase changes going on. The production of the purple iodine vapor is a striking visual of gas formation from a solid. This phase change is due to the fact that solid iodine has a substantial vapor pressure (~0.1 atm)3 at temperatures near 100oC:

Your students may be surprised to learn that solids have vapor pressures, just like liquids! A full treatment of what is occurring when iodine forms a gas upon heating is beyond the scope of this article, but see reference 4 for an interesting, in-depth discussion – phase diagrams included.

The reverse phase change, gas to solid, is also observed in this experiment:

The green laser beam inducing yellow fluorescence as it passes through the vapor provides several inroads for discussing quantum chemistry. This process is initiated by green photons that have energy that corresponds to the promotion of ground state I2(g) to electronically excited I2*(g) (Figure 2): 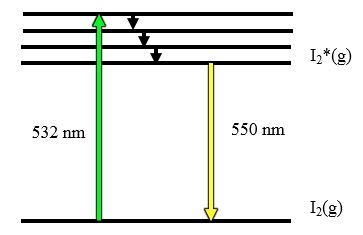 Figure 2: The energy of a green photon (green arrow) matches the energy difference between ground (I2) and excited state (I2*) iodine. After losing vibrational energy (black arrows), excited state iodine releases a photon (yellow arrow) that is lower in energy than the green photon which caused excitation.

It is generally the case during fluorescence that the emitted photon is of lower energy than the photon which caused excitation. A quantitative description of the color shift can be made using the following equation:

I also shined light from violet (l = 405 nm) and red (l = 650 nm) laser pointers through the iodine vapor. Interestingly, the violet laser caused no fluorescence (Figure 3, left), but the red laser did. Because of this, no light was visible from the violet laser as it passed through the vapor (Figure 3). 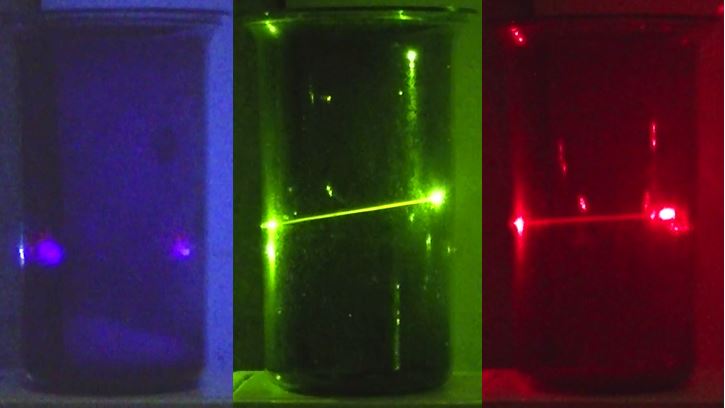 The absence of fluorescence upon excitation of the vapor with violet light is probably because violet photons have enough energy (almost 5 x 10-19 J using Equation 4) to not only electronically excite I2 (g), but also to cause the excited iodine to dissociate. In essence, the violet photos "break apart" the iodine molecules:

I was very surprised to see that the red laser caused fluorescence (Figure 3, right). However, after doing a bit of looking through the literature I found that it is well known that red light can cause fluorescence in iodine vapor.6,7 This can occur because vibrationally excited iodine molecules do not require as much energy to excite electronically (Figure 4). 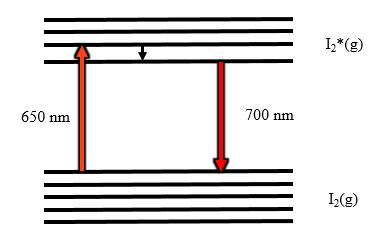 Figure 4: A red photon (red “up” arrow) has sufficient energy to excite a ground I2 molecule that has substantial vibrational energy. After losing vibrational energy (black arrow), the excited state iodine releases a photon (red “down” arrow) that is lower in energy than the photon that caused excitation. In this case, both wavelengths appear red.

I don’t know about you, but I found this to be a fascinating experiment. I just loved all the colors involved – violet, green, yellow, and red – and the flashing lights made it all the better. I’d love to hear about any additional observations you make if you try this experiment out for yourself. Furthermore, do let me know if you have ideas for other chemistry topics that connect to this demonstration.

2. If you choose to do this experiment for your students, take note that the iodine vapor should be generated in the hood. Contact with solid iodine can irritate and burn the skin and eyes. Inhalation of the vapor can cause severe irritation of the nose, throat, and respiratory system. High expose may result in pulmonary edema may result with Although brief exposure of the eyes to light from laser pointers is not considered hazardous,1 such exposure should be limited.

4. Jansen, Michael P., Sublimation of Iodine: The Rise and Fall of a Misconception, Chem13News Magazine, October 2015

Assessment does not include calculating the total bond energy changes during a chemical reaction from the bond energies of reactants and products.

Emphasis is on the idea that a chemical reaction is a system that affects the energy change. Examples of models could include molecular-level drawings and diagrams of reactions, graphs showing the relative energies of reactants and products, and representations showing energy is conserved.

Assessment does not include using quantum theory.

Emphasis is on how the experimental evidence supports the claim and how a theory is generally modified in light of new evidence. Examples of a phenomenon could include resonance, interference, diffraction, and photoelectric effect.