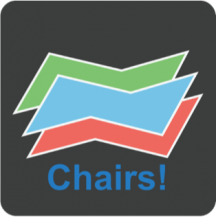 That’s the word I put on the board before I teach Newman projections and cyclohexane chair conformers every fall.

My students are well-versed in SAT vocabulary and quickly come up with the definition and then find examples of things esoteric: dates from history class, poetic structures in English, and even sport-specific practices in athletics.

I then welcome them into ‘brethren’ of those who understand the nuances of steric interactions in organic chemistry. For the ‘uninitiated,’ a short tutorial on cyclohexane conformers is found at this website.

I may make fun of the topic, but teaching this short section of organic chemistry is truly enjoyable. Students are exposed to thinking in three-dimensions with two-dimensional pictures. It’s a great set of training wheels before we get to chirality and stereochemistry a few weeks later. Also, when we cover biochemistry at the end of the year, the chair concept is front and center as we look at the stability of the anomers of glucopyranose.

So, I have a thing for chairs.

Over the past two years, I have immersed myself in designing mobile games for organic chemistry: founding a company called Alchemie and building a team to develop these games. The first of our games is called Chairs! (The exclamation point comes from the fact that an app called Chairs already existed in the AppStore.) The game Chairs! is what we call our proof-of-concept. Folks were a bit incredulous when we told them we design games that make learning organic chemistry intuitive and fun. (See below for download information.)

Chairs! is not a fancy game. The visual design needs an upgrade and an interactive tutorial level will be added. However, this little game is effective at doing what educational games are supposed to do: teach a concept and make it fun.

Let’s start with fun. Alchemie’s developer, Joe Engalan, and I built this game in the middle of the night during the summer of 2014. I knew we were on to something when I could not stop playing the game in August. I wanted to beat the game and could not do it; I was always stuck on level 4 of the 13 levels of the game. I felt like I was cheating, but I told Joe to make it easier. Once we released Chairs!, I was not the only one unable to put it down. Michael Evans of Georgia Tech titled an unsolicited AppStore review: “Simple, Elegant, and Weirdly Addictive.” We also embedded an analytic platform called AppSee into the first release of the game, and we literally watched users play for hours.

Retention statistics for games are the measure of a ‘good’ game. The sharpest spike in downloads for Chairs! came in late January 2015, when 1500 users downloaded the game in a two-week period. The concept was being taught in college classrooms during second semester Organic I and we released our Android version at this time. We took a measure of the retention statistics at the end of February. Our organic chemistry game beat all the benchmarks for a healthy game. Amazing.

The other important measure is whether the game delivered an increase in learning outcomes. Students cannot easily see the relationships of axial and equatorial positions of the chair conformers of cyclohexane. Jenn Stockdill of Wayne State University writes: The difficulties students encounter start early, with “simple” matters of drawing 2-D representations of a 3-D structure. Despite compulsive care in how I draw structures in the notes, students draw wacky bond angles in their own notes.

In the fall of 2014, I conducted a classroom trial for Chairs! at Detroit Country Day School. (Thanks to an incredibly talented student, Cole Wiand, class of 2016, we also have a video of this two-day event.) My forty-five students, in three classes, were given my standard presentation of the cyclohexane concept during the first day. They were then divided into two groups: those who had access to the game as a homework assignment and those who did not. On the second day, the students took a four-point drawing quiz. The classes played Chairs! throughout the entire period, and took a second quiz. All but one of the students earned perfect scores or improved their first quiz score after playing the game. A compilation of the scores is shown below.

The stellar results at Detroit Country Day School have been backed up anecdotally by Michael Wentzel of Augsburg College: “After encouraging my students to download Chairs! and taking class time for practice and a contest, I am extremely impressed with the results. My students as a whole were much more adept at ring flips than in any previous semesters.”

So Chairs! is fun to play and teaches an important, albeit esoteric, concept. This is still a very small part of organic chemistry. The big idea which we are tackling next is mechanisms. Our mechanism game is called Cyclo6. It’s breathtaking in both its scope and its beauty, if I do say so myself. Game designers in Finland, Utah, and Pittsburgh have seen our plans and agree.

I may have a thing for chairs, but I cannot wait to breathe life into Cyclo6.

Our next steps will be to re-release Chairs! and build the beta version of Cyclo6. For download information of Chairs! (for iPhone and Android) and to sign up to be a beta tester, use your mobile phone to text RXN to the number 555888 (message & data rates may apply.)