A solid grasp of proportional thinking is crucial to being able to solve all sorts of problems in chemistry as well as “real life” situations. While many students seem to intuitively understand that one mole is equal to 6.022 x 1023 particles when the analogy is drawn to a dozen eggs, for some, this sort of equality is a puzzling mystery. Students often have trouble understanding the idea of proportions that is so common in chemistry. Everyone seems to have a favored method to support students in developing proportional thinking.

Recently, some interesting conversations about helping students think proportionally have developed on Chem Ed X blogs. Maybe it is just because it is the time of year when many high school chemistry classes are getting deep into quantitative problems including mole conversions, and stoichiometry. Regardless of the reason, the conversation on Chad Hustings post, Teaching Moles through Beans, went far afield into discussions of the practical applications of teaching proportional thinking and various ways to to do so. Some support use of a Mole Conversion Chart. Others favor an intriguing method developed at Arizona State University called BCA Charts (which I plan to try out later this spring!) to support student thinking. Others, see enduring value in teaching traditional dimensional analysis, also refered to the factor label method.

Others say that it doesn’t matter how you solve problems as long as you get the right answer. In fact, I recently had a student make that exact argument in a snarky note on the bottom of a quiz. It shouldn't matter how she got the answer as long as she got the right answer. Problem is, the student got all the problems wrong; she didn't get a single answer correct. Obviously doing it her own way didn't work. As I shared with my class, it is important to learn new ways to solve problems. So even if you can solve a problem another way, learning a new method has value in and of itself because it trains the brain to solve problems in new and novel ways.

For a number of years I have used a simple visual aid to help students grasp proportional relationships like Avogadro’s number, molar masses and the molar volume of a gas. Like many good ideas in science, I don’t remember exactly how I came up with it except that it was on the spur of the moment in the middle of a lesson on mole conversions. I realized that many students kept making the same mistake. To convert from particles to moles or moles to particles they would always multiply by Avogadro’s number and simply reverse the units on the conversion factor. Just like a stopped clock is right twice a day, the students making this error were right half of the time, but couldn’t understand why they were getting the wrong answers despite using the “right conversion factor.” Other students consistently dropped the “per mole” part and simply used Avogadro's number by either multiplying or dividing quantities by it. This is mathematically correct but they couldn't come up with a way to consistently decide correctly whether to divide or multiply in any given situation.

It was then that I realized that they were not thinking about conversion factors as proportions with compound units like liters per mole but rather like they would a (gasp) a unitless number like they might encounter in math class. I could reverse the relationship in a sample mole conversion on the board until I was blue in the face but it wasn’t getting through. To help them see that conversion factors are reversible I took a piece of tag board and wrote the relationship for Avogadro's number on on side then flipped in vertically (like you would a legal pad) and wrote the opposite relationship on the back side. I did the same for molar mass and the molar volume of a gas because those were the sort of conversions we were learning about at the time. Obviously, however, this strategy can be adapted to use with any type of conversion factor.

In subsequent years, I have stuck these cards on the whiteboard as a visual reminder while we work problems as a class. I have also had students make their own set using index cards to help them check their thinking when doing mole conversions. Before calculating, they can set up the calculation using the cards to support a dimensional analysis way of problem solving. This works well enough, but it wasn’t until I recently read Gary Abud’s excellent post, The Two Words Every Chemistry Student Needs to Learn that I realized I needed to add one thing more to these flip cards. Abud argues for shifting away from using the obscure Latin phrase “per” when discussing conversion factors and stoichiometry and adopting the equivalent English phrase “for every.” I highly recommend that you check out Abud’s post for yourself, however, the gist is that saying, “there is 6.022 x 1023 atoms for every mole” makes it more intuitive to students to see that the reverse relationship, “there is one mole for every 6.022 x 1023 atoms,” is also true.

I was skeptical that a simple change in vocabulary would make a difference in how my students thought about proportional relationships but decided to give it a try. I introduced that change in vocabulary in my class and even added the words “for every” to the flip cards. That combination proved to be a winning strategy, especially for those students who had continued to struggle with proportional thinking using other strategies. Remember that girl who got every question wrong on the quiz I mentioned earlier? She aced the test at the end of the unit!

I also use cards to help them practice the reading and decoding of stoich problems.  Sometimes just making sense out of what the question is actually asking and relating that to the balanced equation is challenging for students.  I post a balanced equation on the board and give them cards with the each of the formulas and separate cards for the co-efficients.  I then post a stoich question.  They do not solve it (yet) but just determine what is given, what substance they are asked to find and what co-efficients used when finding the mole ratio.  They select the cards for these answers from the pile and then quick check with the kids around to see if they chose the same ones.  If not, come to resolution.  We keep drilling with more questions to get comfortable reading stoich problems. 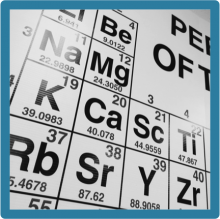 I Have My Students Learn All of the Elements...6 Strategies I Use