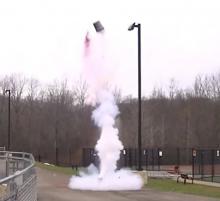 In Chemical Mystery #9, a 5-gallon bucket is launched into the air using the energy released during gas explosions. These explosions result from gas pressure buildup inside a sealed 2 L soda pop bottle. Two slightly different methods of launching the bucket are used, and one works better than the other. Why does one method work better than the other? Check out the original Chemical Mystery #9 post.

The short answer is that more expansion of gas occurs during the explosion when using liquid nitrogen than when using dry ice in water. For a more detailed answer, read on.

The combined gas law (see equations 2a and 2b, below) can be used to describe the difference in height between the two methods (for a more comprehensive treatment on what occurs during the explosion please see this earlier post).
We’ll begin by assuming that the bucket is launched by gas expansion (the change in volume) as a result of the explosion:

Since the 2 L soda bottle is filled about one-third full with liquid in each case, Vinitial should be approximately equal to the remaining headspace volume of 1.33 L (2/3 of 2L).
The combined gas law is used to determine Vfinal in each case:

Equation 2a and 2b

It takes about 10 atmospheres of pressure to cause a plastic 2L soda bottle to fail. Thus, we can use 10 atm as Pinitial in each case. We also know that after the explosion, the gas will take on the temperature and pressure of the ambient air. Thus, we can use Pfinal = 1 atm and Tfinal = 273 K (we conducted the experiment on a cold day in January).

So far, all parameters are identical. The difference between each method becomes apparent when we consider the gas temperature just prior to explosion. In the case of liquid nitrogen, the Tinitial = 105 K.1 In the case of dry ice in water, the temperature is around 273 K.2
Using these values in the combined gas law, we find:

Substituting the results from Equations 3a and 3b into Equation 1, we find a change in volume of 33.3 L for the liquid nitrogen method and 12.0 L using dry ice in water. Thus, we would expect the liquid nitrogen to expand 2.8 times more than the carbon dioxide under the conditions used. This is in fair agreement with the observation that the bucket tended to go twice as high using liquid nitrogen rather than dry ice and water.

HAZARDS:  I describe here some useful tips if you plan on trying this experiment yourself. Please know that all details required for a safe and successful launch have NOT been described herein.  If you try this experiment, you do so at your own risk. The bucket needs to be liberally reinforced with duct tape.  Otherwise, the impact from the explosion will not launch the bucket in the air. Rather, the bucket will shatter into many pieces. After tightly sealing the bottle, STAND BACK.  Pieces of plastic from the exploded 2 L bottle can be thrown as far as 30 m. If the bottle is not sealed properly, hissing noises can be heard as gas escapes from the bottle.  In the event the bottle is not sealed properly, DO NOT approach the assembly until you are certain that all of the gas has escaped. Do not attempt to try this experiment by placing dry ice alone (with no water) into the 2L soda bottle. We have observed the bottle to take a VERY long time (up to an hour) to explode when placing only dry ice (with no water) in the bottle.