Stamp of the Week (maybe month, year or decade depends on how busy I get)

For this week’s stamp I wanted to pick one (or two) that had some really great chemistry and physics portrayed on them. Not just an important discovery but one that was portrayed really well. Immediately that tells me not to look at USPS stamps, but to go overseas!

In 1994 Germany (by this point in history the German postal service had reunited) issued a pair of stamps that honor two fundamentally huge accomplishments in science. The Quantum Theory and Ohm’s Law. They were really well designed stamps and very accurate in their science. 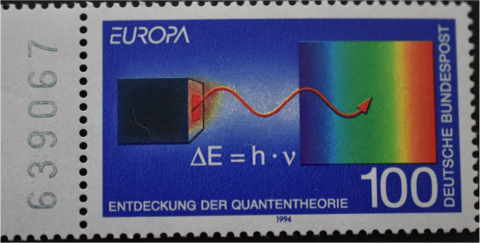 The first one shows several aspects of Max Planck’s work (figure 1). It shows his equation for the relationship between energy and frequency as DE = hv, which is rare, since most texts drop the delta and it makes me happy that they got it right on the stamp. This is the fundamental discovery that explained the quantized nature of light and helped explain one of the failures of classical mechanics. It has a nice representation of a visible light spectrum (and does not portray the widths of each color to be the same) and what I interpret to be a representation of blackbody radiation. I have been able to use this stamp in my classroom and ask my students questions about the accuracy of the spectrum and the equation. The wording says “ENTDECKUNG DER QUANTENTHEORIE” or “Discovery of Quantum Theory’ (if my German is not too rusty). I do find it interesting that the theory is referred to using “der” making it a masculine term. I have many stamps about Quantum Theory and this one of my favorites. The art is of very high quality. 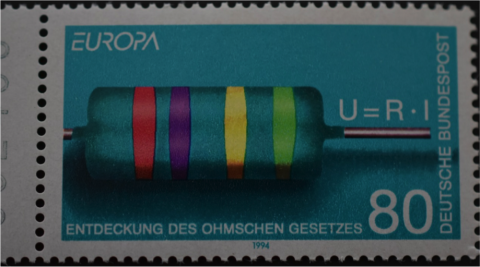 The second stamp shows a resistor with its stripes and the equation U = RI (figure 2). In German the symbol for voltage would be U and not V as we write it in the United States. I can see some sense in this since we sometimes use U for potential energy in physics. Ohm’s Law is one of the most fundamental ideas of electricity and magnetism and has been featured on many other stamps in addition to this stamp. The graphic quality is amazing on the stamp. The resistor is very easy to read. I am a little rusty in reading these stripes but I believe this one is 270, 000 ohms or 270 kilo-ohm. The wording on this one is “ENTDECKUNG DES OHMSCHEN GESETZES” or “Discovery of Ohm’s Law” (again pending my 35 years ago German courses). Unlike the quantum theory that uses a masculine form this uses a gender neutral form in the term.

These were sold as a matched set and were in very common use so samples of used stamps are readily available.

Check out Michael's Stamp of the Week #1. 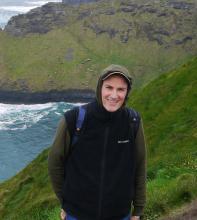 It was not that long ago that I realized that  E = hv is rooted in special relativity theory. Although the expression Etotal = gamma*mc2 ( where gamma is the Lorentz factor) is easily derived using calculus, p = gamma*v is not. Neverthess, a bit of algebraic manipulation of the three formulas leads to E2 = (mc2)2 +p2c2, where E = total energy. For a particle at rest, which has no momentum, E2 = (mc2)2 or E = mc2. But for a photon, which has no mass but momentum, the expression simplifies to E2 = p2c2 or simply E= pc. Since momentum, p = h/lambda, ( lambda = wavelength), E = hc/lambda or E =hv.

Thanks for that! Nicely said.

Thank you for sharing these two German stamps. I'm sure you did not realize that the articles used in the two stamps have been used in the genitive case, thus it is "die Theorie, female" and "das Gesetz, neutral". For a refresher on the declension of German articles  ;-) I recommend this wikipedia link: https://en.wikipedia.org/wiki/German_articles