I have just finished teaching bonding to my chemistry classes and was reminded of a brilliant stamp that I have from Russia (technically at the time it was the Soviet Union) that showcases a quadruple bond. Yes you read that right!

As early as 1954 there were reports out of the USSR of a compound now known as Potassium octachlorodirhenate (III). The ion of interest here is Re2Cl82- and it features a metal to metal bond type that had not been previously shown. In the early 1960’s F. Albert Cotton (I am sure many of my readers will remember being tortured by the practically 20 pound textbook Cotton and Wilkinson) characterized the compound as containing a short (2.24 angstroms) Re to Re bond. This was a previously unknown bond type that was not seen in “main group” chemistry. This bond featured the use of the 5d orbitals (minus the 5dx2-y2) and has now been seen with elements like Molybdenum, Chromium, and Tungsten. The term delta bonds could be used to describe this. 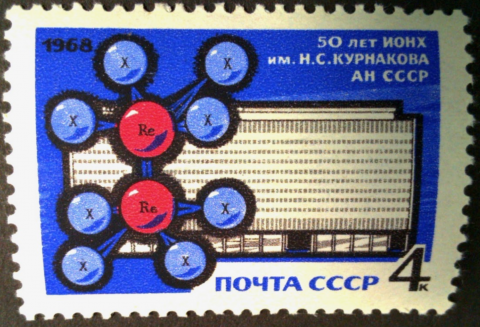 I like to show this stamp to my students and discuss that there are more complicated species than what we draw in class. They do exist and we typically do not “test” students about them in high school chemistry and AP Chemistry classes. The stamp itself was issued 1968. It has a Scott Catalog number of 3507 and shows how much the USSR was willing to acknowledge scientific achievement in its stamp program. The image on the stamp does not sufficiently illustrate the quadruple bond in my opinion and requires some explaining on my part for my students. I envision that the building in the background represents the laboratory where the original work was done. Not surprisingly there is no mention of Cotton on the Soviet stamp. The outlying chlorine atoms are represented by X’s and I will assume they were implying that other halogens (most probably fluorine) could be used also.

I have learned an amazing amount of new chemistry through my philatelic pursuits and am always discovering new people, new history, and subject matter that I was unfamiliar with from my schooling. Perhaps one of the greatest benefits of these pursuits was being invited to visit the Science History Institute in Philadelphia and having my picture taken with a second printing of Newton’s Principia.