Thank you "Lady from Texas" 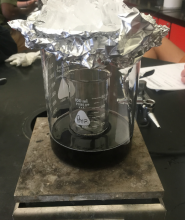 WHAT AM I DOING TO HELP KIDS ACHIEVE?

HOW DO I KNOW WHEN THEY ARE THERE?

WHAT IS THE EVIDENCE?

I need to thank a lady from Texas. We had just finished the classification of matter and I have always wanted to follow up with a distillation. I have talked about it and once I even got some extremely expensive glassware that I carefully set up, managed to break by third bell and really ticked off the AP teacher.  At Chem Ed 2015, a teacher from Texas showed me this quick and dirty way to do a distillation that the kids can do. First, let me say that this is not my idea.  I forgot her name. "Lady from Texas", let me just say "thank you". If you are reading this, please shoot me an email and I will be more than happy to give you credit.  It worked really well.

Here is what the kids did. First, they placed a large beaker on a hot plate with a larger rubber stopper in the center of the beaker. We found rubber stoppers worked better than cork stoppers. Next, they carefully poured in some extremely cheap grape soda (any soda should do). They filled the beaker up until the soda came just below the top of the stopper. They then placed a smaller beaker inside the larger beaker so it was sitting on the stopper. Finally, we covered the top with aluminum foil, made a slight indent and placed a handful of ice on the foil. (The small beaker should not extend above the top of the larger beaker. There needs to be some space between the small beaker and the aluminum foil.)

I asked students, "What do you think is going to happen?". I got a wide variety of answers. Most thought the soda would boil and condense. We did the experiment and they found a clear transparent liquid in the small beaker.  The soda boiled.  Condensation formed on the foil and collected at the bottom of the indent wear droplets of liquid fell into the small beaker.  One student thought it might be the grape flavoring. I asked her why. She said that it smelled weird and there did not seem to be any smell left in the large beaker with the rest of soda. I thought this was a pretty good observation and conclusion.  Then, for me, the "ah hah" moment came. I asked students if they thought a chemical or physical change happened. One student was sure it was chemical.  He saw a clear transparent liquid that was a different color than the soda left in the large beaker and heat was involved in the process. Both heat and color change can be signs that a chemical change might be taking place.

Honestly, I cannot argue with that logic. It is reasonable logic based on decent observations. Unfortunately, it is wrong. Here is the good part...this student helped me form my lesson plan for the next few days...tackling a misconception that deals with chemical and physical properties. So...the kids were able to distill something meaningful to them, asked some good questions and it helped me uncover some misconceptions they have...thanks "Lady from Texas".

On the agenda for next week, flipped assignments and inquiry....the good, the bad and the ugly. I will have a report from the trenches. I will let you know how it goes. Until then, stay positive, have fun and remember, in the end, it is all about the kids.

Just got an email from some folks at Chem13 News (thanks). They are pretty sure they found the Texas Lady. They told me that Robyn Ford of Denton, Texas published this activity with AACT and Diana Mason presented it at ChemEd. So, Diana Mason is the official "Lady from Texas"! Thanks Diana...you are awesome. 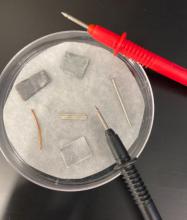