The structure and spatial orientation of polymer chains very much influence the chemical and physical properties of polymers. One example of the ways in which polymer chain architecture can vary is tacticity, which describes the arrangement of pendant side groups along the main polymer chain. There are many types of tacticity, but the three most common types are:1,2

Polymerization reaction conditions can influence the tacticity of the polymer produced. Ionic catalyst systems often produce more ordered isotactic and syndiotactic polymer chains, which can form ordered polymer crystals.1 In contrast, free radical polymerization often produces the more disordered atactic polymers.1 Polymers comprised of atactic chains are often less crystalline and more amorphous. Polystyrene (PS) is a common polymer that exhibits tacticity with its pendant phenyl ring side groups. As described here, scrap sheets of PS can be patterned and assembled to produce a single model that can illustrate the three main types of polymer tacticity.

A drawing of the repeat unit of PS featuring a prominent phenyl ring side group is shown in Figure 1. Other common polymers with pendant groups along a hydrocarbon chain include polyvinyl chloride (pendant chlorine atoms) and polypropylene (pendant methyl groups). As noted in a recent post comparing the chemistry of the polymers PS and starch,3 PS turns 90 this year4 and is comprised only of carbon and hydrogen. This hydrocarbon polymer is formed from addition polymerization of styrene, a hydrocarbon derived from petroleum. The nonpolar PS often lacks biodegradability, as it is can be dissolved by nonpolar solvents but not water. 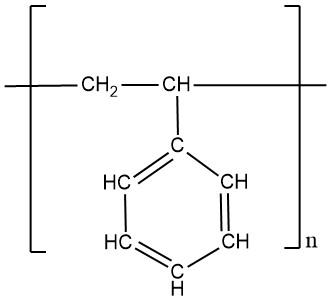 Polymer tacticity can be described with drawings or with models. LEGO bricks (comprised of acrylonitrile-butadiene-styrene) have been used to model chemical structures, and this includes representations of polymer tacticity.5-7 This model described in this post uses a model build from PS polymer to show tacticity within PS polymer chains. To make the model, PS container lids were cut apart with scissors to obtain the flat part of the lid. Each flat PS sheet was marked with a molecular pattern using a permanent marker, as shown in Figure 2. 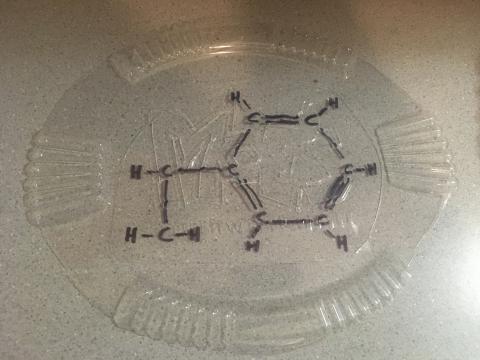 Excess PS was trimmed away from the pattern using scissors. A paper hole punch was used to make two holes in the pattern, one in each of the carbons that are not part of the six-carbon phenyl ring group. A block letter was added to the middle of each phenyl ring.  The goal of the block letters was to spell the word POLYSTYRENE in alternating colors. Once the PS sheets were cut out and patterned, they were placed in a toaster oven to heat them above their glass transition temperature. When this happened, the polymer chains in the patterned PS sheets mobilized, and the sheets contracted and thickened. The idea of heating PS sheets in order to shrink them is not new; it has been the basis of Shrinky Dink products for nearly 50 years.8 For this model, the sheets were obtained from containers that would otherwise be discarded. A video showing a sheet of PS contracting or shrinking in a toaster oven is shown in Video 1. Note that the sheet shrinkage is not always isotropic; it can shrink more in one direction than in other directions.

Video 1. Homemade shrinking polystyrene sheets laser-cut into a graphene pattern, colored with permanent marker, and then placed into a toaster oven to shrink and thicken. ChemDemos YouTube Channel (accessed 11/18/2021)

After the PS pieces shrank, they were quickly removed from the toaster oven and laid flat to cool them. A length of yarn was run through each piece to produce a model of the polymer chain. The PS polymer model was laid out across a sheet of PS foam (in keeping with the PS theme). To use the model to demonstrate tacticity, each PS piece is simply flipped to one side or the other over the extended length of yarn, as shown in Figure 3 and described in Video 2. 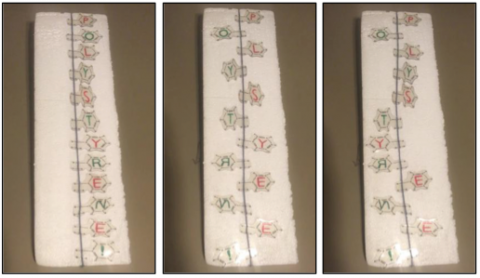 Thus far, this model has only been used for the purpose of demonstrating polymer tacticity. However, students could gain more by becoming involved in the construction of this model. Encouraging students to draw the molecular patterns on the PS sheets could help reinforce understanding of the bonding arrangements in the polymer chain. Each student could have the opportunity to personalize their own pendant phenyl group for the model. Additionally, enabling each student to participate in shrinking the sheets in a toaster oven could help to illustrate the concept of the glass transition temperature (e.g., rigid and glassy below Tg and soft above Tg). Shrinking decorated PS sheets is a perennial favorite at outreach events.

Polystyrene is resistant to biodegradation, which leads to concerns about it producing persistent microplastic pieces in the environment. These pieces have an average size less than 0.5 cm and could potentially act as vectors for transport of pollutants in the environment.3,9 However, there are points of introduction to the Twelve Principles of Green Chemistry in this demonstration.10 Construction of the model, to some extent, is in alignment with the principle of Waste Prevention. PS container lids, which in many cases are not recycled, can be repurposed for constructing this model. This gives at least of some of the PS in the lids another purpose before their conversion to waste. However, this does not take into consideration any amount of waste that was produced while making the PS or the containers in the first place. The polymer polystyrene can also be used in discussions of the Green Chemisty principles of Catalysis and Atom Economy and Catalysis. Some forms of PS, e.g. syndiotactic PS, are made catalytically.2 PS is an addition polymer, so the PS polymerization reaction should have an atom economy of 100%. However, other chemical aspects of the process, including the production of the styrene monomer, might not fare as well in terms of the Principles of Green Chemistry.

This simple PS model, therefore, can be related to a number of polymer chemical principles. Scrap sheets of PS can be patterned and assembled to produce a single model that can illustrate types of tacticity in PS. Additionally, preparation of the model can illustrate glass-transition temperature and the fact that the model is comprised of PS can be connected to environmental and Green Chemistry topics.

Precautions, including proper personal protective equipment such as goggles, should be used when shrinking the PS sheets. Toaster ovens can have parts that are hot to the touch. PS that has been heated to above its glass transition temperature (over 100oC) is also hot to the touch. Tongs are recommended. PS can also melt, off-gas obnoxious fumes, or even burn when heated. It is recommended that the PS is heated on a sheet of aluminum foil rather than directly on the shelf of the toaster oven.