I recently watched a video in which a chemist (who goes by the nickname “NurdRage”) activated a chemiluminescent reaction by vapor deposition. You can see a short clip of this experiment below:

Isn’t that cool? To create this effect, NurdRage soaked a card with a solvent containing hydrogen peroxide and a dye. He then opened a container of oxalyl chloride, (COCl)2, which is quite volatile. As vapors of oxalyl chloride escaped the container, the oxalyl chloride dissolved into the fluid in the card and the following reaction occurred:

The chemical energy released in the reaction was gained by the dye in the card and released as light. Vapor activated chemiluminescence!

As soon as I saw this reaction I wanted to try it out for myself! Unfortunately, oxalyl chloride is toxic, corrosive, and a lachrymator. Thus, the experiment conducted by NurdRage needs to be conducted in a hood, and it is not particularly amenable to simple presentations. I began to wonder how I could create this vapor activated chemiluminescence using simple materials.

Luckily, I figured out how to create something similar to NurdRage’s experiment using just glow sticks, ammonia, filter paper, and plastic droppers. Here’s how it works. The reaction which provides energy to power glow sticks involves the base-catalyzed reaction between bis(trichlorophenyl oxalate) and hydrogen peroxide:

You will note that the experiment I conducted is an example of vapor catalyzed chemiluminescence in contrast to the vapor activated chemiluminescence achieved by NurdRage. Nevertheless, I think this experiment might be able to be used to show the effect of temperature on diffusion. For example, it might be interesting to try holding filter paper infused with glowing light stick mixture above ammonia that has been warmed and ammonia that has been cooled. Faster diffusion of ammonia out of the former should cause a greater increase in light emission than the latter. If you have any ideas on how to extend this experiment, be sure to share them with me. Happy experimenting!

Acknowledgement: My son, Jackson Kuntzleman, captured the film and helped to edit the video presented on the vapor catalyzed glow stick. 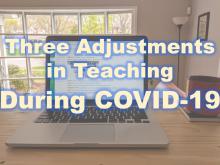