Since the early summer, we have been conducting experiments with anthocyanin extracts from various berries that have been stored in discarded food cans. The first part of our study, Colourful Chemistry of Canning, was reported in June this year.1 In this short article, we provide an update on our more recent experiments.

To date, we have found that solutions containing Al3+ ions frequently form beautiful violet or purple solutions when added to anthocyanin extracts.1,2 Pleasingly, we found that it was possible to replicate some agricultural chemistry studies from the 1920s that involved the formation of anthocyanin complexes with tin ions.3 It had been reported that canned fruits, such as peaches and raspberries would become purple after storage in tinplate cans. We found that it was easy to recreate the effect of tin by storing raspberry extracts in discarded tinplate food cans, within 24 hours the red extracts changed from being red to violet/purple (figure 1). In this article, we summarise the results of experiments that expand the scope of the earlier report that was focused on reactions with raspberry extracts and acidified red cabbage extract. 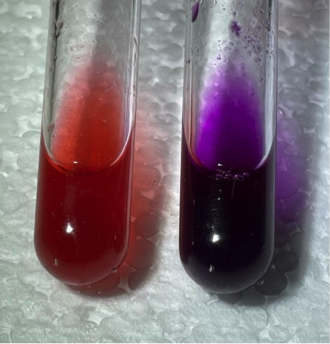 Figure 1: Example anthocyanin complex with Sn2+. Raspberry extract (left side) and extract containing Sn2+ after being stored in a discarded food can for 24 hours (right side).

Our initial studies used raspberry extract,1 this was obtained by warming frozen raspberries in hot water and straining out the fruit pulp. The resulting raspberry juice was found to turn purple/violet on exposure to the tin coating inside a food can or after addition of SnCl2 dissolved in glycerol. Our original inspiration for studying fruit interactions with tin cans had come from studies on the behaviour of fruit being preserved by canning, so we have also examined what happens to whole raspberries when stored in contact with a tin metal surface. 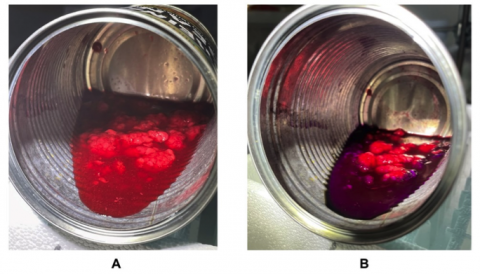 Figure 2: Whole raspberries exposed to the tin plate surface of a discarded food can. The pictures show A frozen raspberries allowed to thaw in baked beans can, B raspberry pulp after 16 hours.

As can be seen in figure 2, after 16 hours, the liquid from the thawed raspberries changed from the expected natural red colour to a vivid purple. The fruit still appears largely red in colour, however closer inspection revealed that areas of the skin that had been in contact with the tin surface were also a strong purple colour. We had learned previously that the fruit acids in raspberry tissue are responsible for making the extracts relatively acidic, typically pH 3 to 3.5.4 These acid conditions are highly likely to facilitate reaction with the tin layer on the inside of a tinplate can. The structure of the tin complexes is unknown, however binding to other metal ions is well known and can be complicated.5 For the purposes of this article, a simplified representation of the binding motif between tin ions and anthocyanins (figure 3) is useful. Figure 3: Simplified binding motif for anthocyanins with tin ions. R = H or carbohydrate substituents, X = H or OH. The value of n is likely to be 2, however air oxidation could in principle lead to Sn(IV) being formed.

With these factors in mind, we chose to survey a selection of berries that would likely have similar properties to raspberries and that would be available to us locally. In each case, the berries were frozen as soon as possible after picking to preserve them. We have also found the freezing process helps the release of anthocyanins from the fruit when warmed, this is presumably because the cells are damaged by ice crystal formation. Care must be taken not to excessively dilute the initial extract since, if the pH is raised too much, the solution will not be acidic enough to react with the tin surface. The resulting fruit “pulp” obtained from allowing frozen berries to thaw is acidic enough to react with tin. However, extracts that have the pulp removed can also be prepared, by placing a coffee filter paper in a tea strainer or small sieve. The thawed fruit should be mashed with a fork, placed in the filter paper and the resulting liquid collected in a beaker or cup over 20-30 minutes. 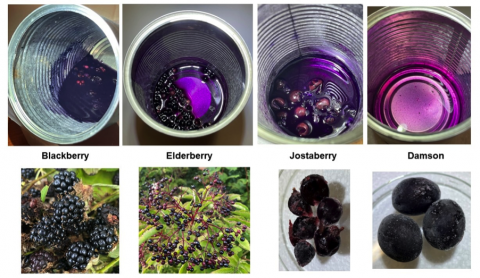 Figure 4A: Fruit extracts exposed to the tin plate surface of a discarded food cans. In each case, frozen berries were allowed to thaw in the cans and were stored for 16 hours.

Experiments were conducted with blackberries (Rubus fruticosus), elderberries (Sambucus nigra), damsons (Prunus domestica subsp. insititia), and jostaberries6 in food cans. In each case, a dessertspoon full of frozen berries was added to a discarded food can that had been washed with water and allowed to dry (to prevent rusting). The berries were added to the can and a dessertspoon of boiling water was added. The can was then stored (tilted at 45°) for 16 hours. (figure 4A). In all cases, the initial red extracts became purple or violet in colour after exposure to the tin coating on the interior surface of the cans (figure 4B).

A variety of food cans have been tested, so far, these include: baked bean, tomato soup, mandarin, pear and pineapple cans. Each of the selected cans had an exposed tinplate surface, in some cases, there can be a protective polymer layer on the internal surfaces. Cans for chopped tomatoes or sweetcorn are usually protected, these cans have been useful for comparative purposes.

When the first “colourful chemistry of canning” article1 was peer-reviewed, the reviewers made the very welcome suggestion to try using solder wire as a tin source. We have subsequently been able to test this with elderberry and blackberry extracts. Figure 5 shows the results of exposing solder wire (60% tin, 40% lead) to elderberry extract for 24 hours. As might be expected from previous experiments with tin, the solution became purple after exposure to the surface of the solder. A control experiment is also shown in figure 5, some lead foil was immersed in elderberry extract for 24 hours, in this case the colour of the extract did not change, even after >48 hours in contact with lead metal. Following the success of the experiment with elderberry extract with solder wire, we also tested blackberry extract in the presence of solder (figure 6). Solder wire was exposed to blackberry extract for 24 hours and, in this case, the solution in contact with the wire turned noticeably darker. On closer inspection, a strong purple colouration could be seen in the lower part of the sample vial (figure 6), this seemed to adhere to some residual fruit skin particles. The solder wire was removed from the solution and allowed to dry on a piece of paper towel. The surface of the solder was covered in a purple-coloured residue which, when scraped off, was observed to be a purple powder. We have seen frequently very similar deposits on the inside of the food cans that have been exposed to berry extracts (see figure 7). Similar observations were also made by Culpepper in his original study reported in 1927,3 and were attributed to the formation of complexes of tin ions with anthocyanins that had deposited on the can interiors or particles of tin hydroxides. Figure 7: Deposition of purple solid residue on the interior of a pineapple can exposed to raspberry extract.

We became aware that some flower extracts are naturally mildly acidic,7 so we attempted a reaction of the extract from red begonia flowers.8 We have found these flowers to be particularly amenable to extraction, soaking the petals in hot water readily releases a deep red extract. On removal of the flower petals, portions of extract were transferred to a discarded chopped tomato can and a pears can (tinned in fruit juice), both of the cans were then stored for 16 hours (figure 8). The results aligned with the previous experiments with fruit, the coating on the internal tin surface of the chopped tomatoes prevented any reaction from taking place. In contrast, the begonia extract in the unprotected pears can turned purple after prolonged exposure to the tinplate surface.

Figure 8: The samples labelled 1 show begonia extract in a chopped tomato can and the sample labelled 2 has been exposed to the internal tin surface of a pears can for 16 hours (samples removed from the cans are also shown).

We have continued to try to replicate experiments that had been conducted in the early 20th century to understand why certain foods became discoloured on prolonged exposure to tinplate cans. Earlier studies had been confined to raspberry extract and acidified red cabbage, however we have found that blackberries, elderberries, jostaberries and damsons also react with the tin layer inside many food cans. In addition, we have found that solder wire is also able to react with anthocyanins derived from berries to form colourful tin complexes. Furthermore, we have tested the aqueous extract from flower petals, where the naturally acidic solution was found to interact with tin metal in a similar way to the fruits we have studied. None of the extraction experiments described require specialist equipment, the “reagents” are fruit or flower extracts and inexpensive tin-containing items that can be found in the home, grocery store or hardware store. All of the anthocyanin sources examined here have been obtained from family gardens or responsibly foraged from the wild. The main limitation in this work has been the range of fruits or flowers available to us locally, so we hope that readers in other locations will be inspired to test locally grown anthocyanin sources themselves and share their colourful results.

Safety glasses are recommended for these activities. Do Not allow any of the substances in use to come into contact with skin or eyes.

All the solutions should be diluted in water and can be disposed of by flushing down the sink with plenty of water. Used food cans, should be rinsed and recycled using locally available facilities.

We would like to express our gratitude to Xandi Peplinski and George Peplinski for supplying the damsons and jostaberries for this study.