Augmented reality is a type of technology that uses an app to turn a hidden QR code into a three dimensional object on a screen as viewed by your camera. I have heard that there are biology related augmented reality pictures. You can look at a heart on a piece of paper but when it is viewed through the app it appears to be beating and you can follow the blood flow with the camera. Elements 4D attempts to bring augmented reality to chemistry.

Here is how it works. First, go to the Elements 4D website and download two items; the app on an android or apple device and the paper "blocks". Second, print out the element paper blocks on some card stock. Next, carefully cut these out and use tape to form blocks. I was able to glue them onto some homemade wood blocks. You could just as easily use styrofoam. You can choose to have them filled with nothing and just tape the sides together. You will just need to be careful not to crush them.

Now that you have a set of cubes and the app, the fun begins. Open the app. Now view one of the cubes through the camera on your device. You will now see the element as it exists in nature. The element looks like it is three dimensional and inside the cube. As a bonus, if you place two elements together, as an example Na and Cl, it "reacts" and you see the compound.

There are some good and bad points about this app. First, it is kind of cool that I can show a 3-D version of elements that I could never get my hands on such as gold, plutonium and chlorine. It is also nice to see the elements react to form compounds. The bad news is that I was not able to get all of the elements to react as expected. It may have been user error or possibly a bad print job on my part but some of the elements that should have reacted did not.

Overall, it is nice to have a set of these cubes around to show to students at various times. They can also make their own set for home. Both the app and the cubes are free. We were doing a "classification of matter" activity and I was able to quickly show how elements have different properties than the compounds they form. Granted, I believe that real chemicals should always be used but this came up at the end of class. It was quick and easy. The kids really liked to see the app in action.

Do you have an augmented reality app or some technology that you cannot live without in the classroom?  How about sharing it as a pick?  Would love to hear from you. Hi!  Do you know if this app is still available?  I had used it when it first came out, forgot about it until today when I found my cubes, and I wanted to use it!  But I can't find the app nor the pdf's anywhere to make the cubes!  Are you still using it?  Thanks!

Amanda - Thanks for the comment.  I am not sure what happened but after doing several searches all I got was "This product is no longer available".  Thanks for asking.  Sorry for the news. 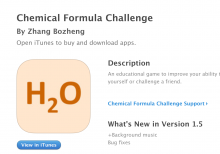 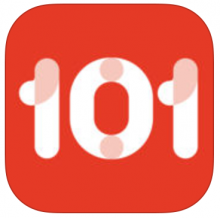 Using The ChemDraw iPad App For Making Structures: A Quick Review And Tutorial