As I mentioned in a previous post, Introduction to the Concept of Antioxidant - A Demo, chitosan is able to counteract oxidation and it also features antimicrobial properties. Besides that, chitosan can also be used in wastewater treatment related fields since it is considered to be one of the best biopolymers able to remove pollutants from wastewater1.

One of the most striking aspects of this material, is its low-cost; it is actually produced by deacetylation of chitin which is extracted either from crab shells or from the exoskeleton of sea creatures such as crayfish, lobster, prawns and shrimps2. In addition, chitosan is non-toxic and biodegradable. The structural formulas for chitin and chitosan are shown in figure 1. 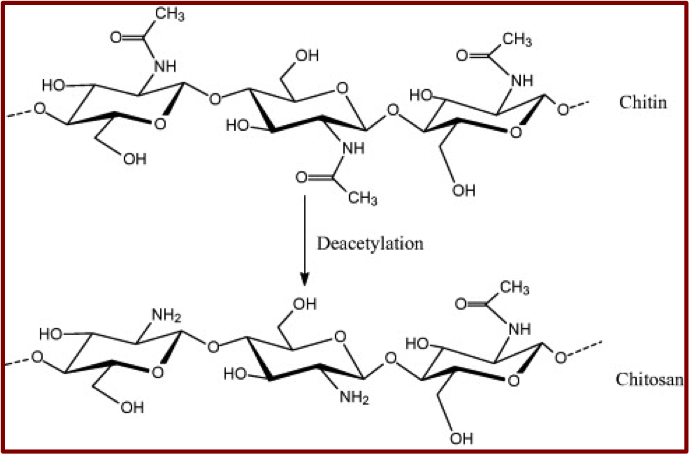 Many experiments have been carried out by testing the adsorption properties of the materials toward methylene blue (MB) which is the most commonly used substance for dying cotton, wood and silk. It can cause eye burns though and the treatment of effluents containing MB is of interest due to its harmful impacts.

An interesting adsorption agent which can be used for wastewater treatment purposes is sawdust which is a by-product of the wood industry than can be used either as a fuel for cooking or as a packing material. Its cost is virtually negligible and its has proven to be a promising low-cost material for the removal of MB from wastewater. With the same purpose, plenty of food wastes such as fruit seeds (orange, apple, mango etc), fruit peel, leaves, can be used as well. Through my reading of the topic, it came out that almond shells are also able to reduce the concentration of some dyes in aqueous mediums; it seems that lignocellulosic material, due to the presence of organic compounds such as lignin, cellulose and hemicellulose, are able to bind dyes such as MB through different mechanisms3.

Luckily, growing up in a family from the south of Italy, almonds are always present in my house so it wasn’t difficult at all to get a lot of their shells. I have been lucky again since in the lab where I work, plenty of MB can be found (both powder and solution) so I decided to test the adsorption properties of almond shell towards MB whose structural formula is shown in figure 2. 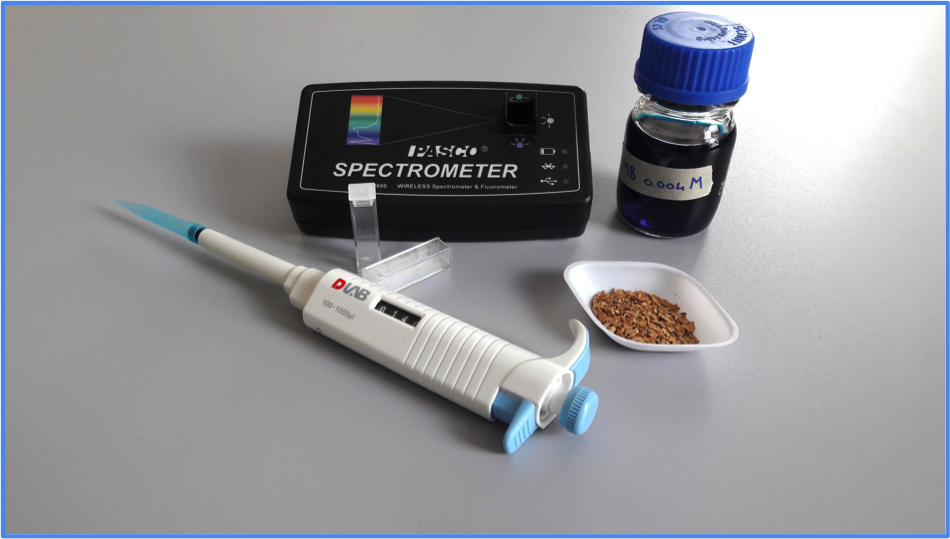 Figure 3 - Basic equipment for the experiment 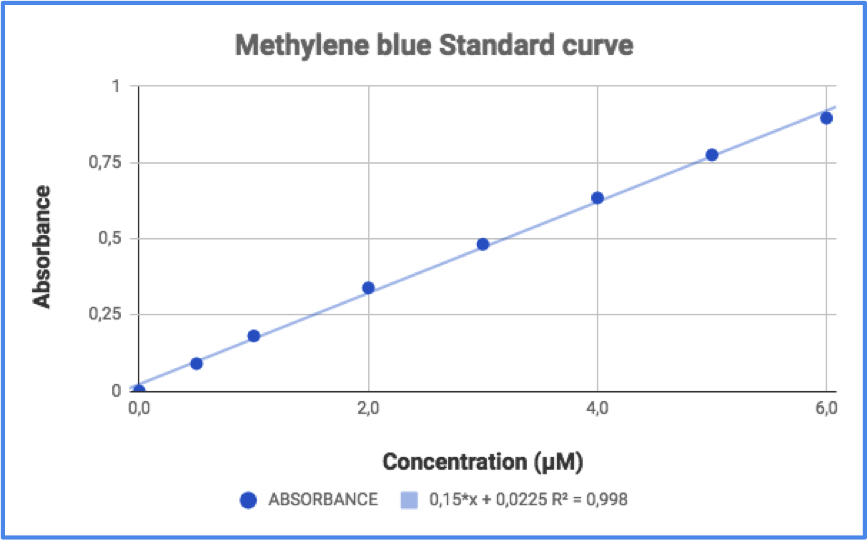 The second step is to treat the almond shells. They were dried in a oven for 6 hours at 50°C even though they looked quite dried before the heating treatment. At the end of this process, the shells needed to be ground as much as possible in order to maximize the surface area of the material. Of course, the adsorption capacity depends on the size of the particles; a coffee grinder could be a good option to pulverize the shells but I preferred to use a mortar and pestle to grind them. (I just wanted to test the ability of the material to adsorb the dye and to determine a sort of trend in that process.)

I carried out a bunch of trials and results turned out to have the same trend which is a logarithmic one. Of course, single results were a little bit different from each other because of likely different experimental conditions but in the end the final trend was always the same.

Now, we move on to the actual experiment.

In each case, as said before, at the end of the data collection I got the same trend; here are the results for one of the trials I carried out. The spectra and processed data are reported in Figure 5 and in Table 1. 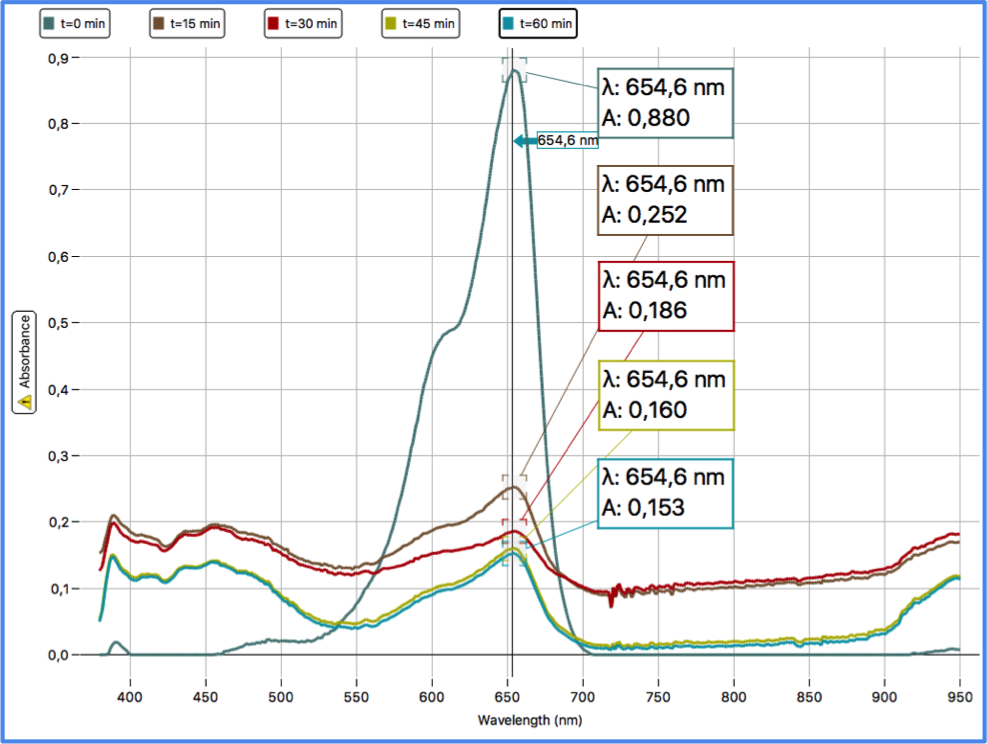 The q parameter is known as Adsorption capacity and it was calculated by using the following formula: 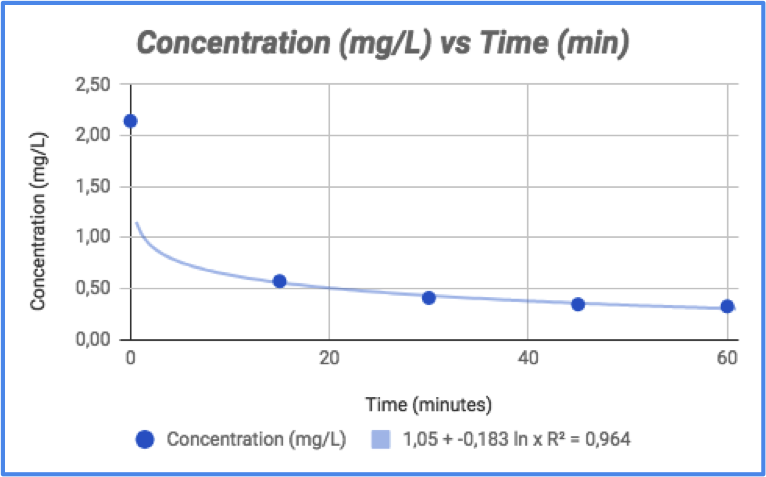 Figure 6 - Variation of concentration over time 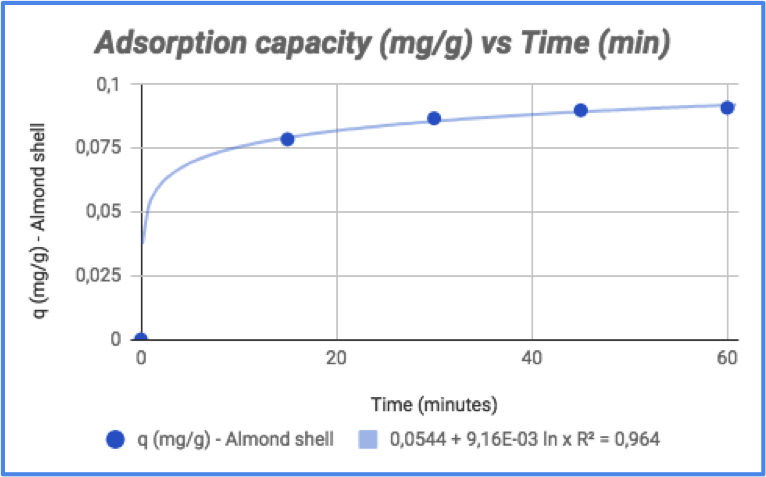 By looking at the graphs, it is clear that most of the dye is removed in 15 minutes; after that time, concentration reaches a plateau and its variation is significantly lower. In terms of color change, that can be seen by looking at figure 8. 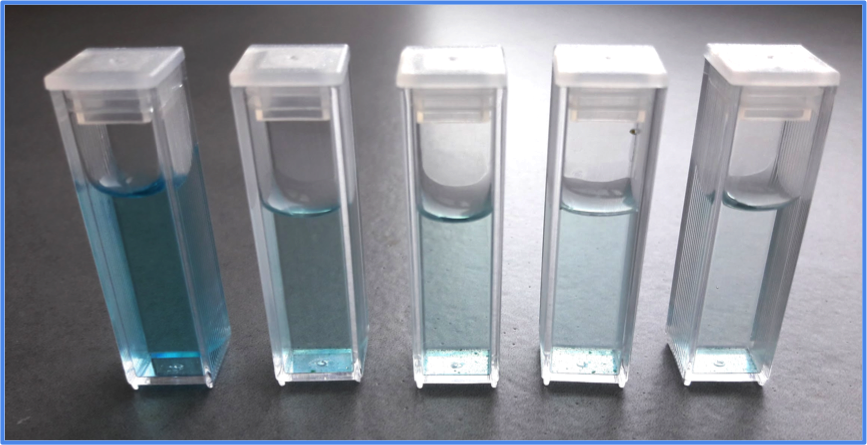 As you can see in figure 8, the liquid at t = 0 is more intense in color; after 15 minutes that intensity fades away and it is basically the same from 45 minutes to 60 minutes. Of course, this experiment does need to be implemented quite a lot. I did not consider the size of the adsorption agent particles and other experimental conditions (pH, temperature, additional contact time, amount of shells etc) but I do believe that the final result is quite interesting because of the simplicity of the principles behind. In fact, by using a poor material, it is possible to improve the quality of an aqueous medium.

I hope you find this quick test interesting and useful for introducing some environmental chemistry ideas in your lessons. As usual, I am open to suggestions and advices!

2 - International Journal of Research in Pharmaceutical and Biomedical Sciences, 4(1), 312–332.