The Martian: Popular Fiction Plus Chemistry 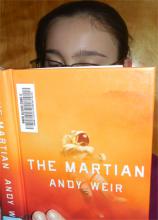 “What are you reading?”

This twist on the traditional icebreaker question kicked off a meeting session last summer. I was eager for the conversation to make its way around the table to me. On my plane ride the day before, I’d started The Martian by Andy Weir, and I was hooked.

It was suspenseful science fiction. Chemistry made the first of its many appearances on page two. STEM-related details were woven throughout the story. Information seemed realistic enough that I wished I had a science text on hand to do some checking as I read. The book’s premise grabbed me: one of the first astronauts to land on Mars is believed to be dead and is left behind on the planet when the rest of the team evacuates, forcing him to fend for himself. No, humans from Earth haven’t physically been on Mars at this point. But the book’s connection to current reality made it seem like we could. I finished the book quickly.

Later, I did a second read-through. The first time, many details had jumped out at me, as I wondered what science students would think of them. The second time, I combed through the chapters and made note of items that might find potential use in the classroom.

Fiction in the Classroom

Using chemistry shared in novels within the chemistry classroom is nothing new. For example, past J. Chem. Educ. authors have shared ideas such as “Using Science Fiction To Teach Thermodynamics: Vonnegut, Ice-nine, and Global Warming,” “Chemical Elements in Fantasy and Science Fiction,” “Chemistry in Victorian Detective Fiction: ‘A Race with the Sun,’” and “Teaching Chemistry Using October Sky.” Lowell Thomson has posted here on the ChemEd Xchange about his use of non-fiction in a 10th grade chemistry class and invited suggestions of other non-fiction and novels.

Such connections can spark interest in chemistry, as students touch on chemistry concepts in a way that goes beyond words in a textbook. A movie tie-in is also possible; a movie version is scheduled to be released fall 2015 (http://www.imdb.com/title/tt3659388/). It could also lead to learning about work currently being done on Mars exploration. A recent Xchange post by Hal Harris shares the New Yorker article “Moving To Mars.” See supplemental science connections for students.

Science in The Martian

That the details in the book seem so scientifically plausible is no accident. Weir describes his research for the book:

“I wanted to tackle the question of how a marooned astronaut might actually survive on Mars, using real science to back it up.

That’s where things got fun for me. Being a nerd, I love doing research and science to make sure everything is plausible. Every part of the book is as scientifically accurate as I could make it, from the energy consumption of a rover to the exact process for reducing hydrazine fuel to liberate the hydrogen with which the protagonist could make water.”

Details from the book could be used as calculation exercises with students. For example, a simple conversion-style problem could be drawn from the main character, Mark Watney, as he describes emergency use machinery that is designed to absorb carbon dioxide from his environment. Its filter is designed to last 6 people for 5 days. How many days will it give him, since he’s the only one left? Students could also be encouraged to explore further questions related to the situation. How do the carbon dioxide filters work? What actually becomes “saturated” within the filter when it’s used up? What are the effects if we breathe in various percentages of carbon dioxide? How much is too much? What connection does this scene have with the movie scene from Apollo 13 where carbon dioxide filters are also getting saturated?

Or, even a short phrase could be used to kick off a brief discussion. Watney says, “All natural, organic, Martian-grown potatoes” (p 150). What questions arise? What difficulties would he run into growing potatoes on Mars? How did he start them? What does “natural” and “organic” mean to him? What does it mean on products here?

Using The Martian in the Classroom

Weir presents a mix of sciences in the book, so its use would not be limited to chemistry specifically.

The first 37 “sols” in the book from Watney’s log entries (another comparison for students—an Earth day vs. a Martian sol) give a good taste of the story and of chemistry. This goes through the first four chapters and is fewer than 40 pages. It also ends with a sentence that could give students a cliffhanger push to continue reading: “The Hab is now a bomb” (p 37).

Levels of Sharing the Story

1) Read it yourself and recommend it to students for personal reading.

2) Give students a short excerpt from the book. Ask students to solve the main character’s problem or to analyze it as to whether the description is scientifically accurate. This would not require purchasing a class set of books.

3) Introduce the book with this short slice of four chapters described above. Then, discuss specific scenes in class, either chosen by the instructor to illustrate a particular point or by students based on their interest. Students would need access to books.

4) Have students continue to read the book and ask them to find instance(s) of chemistry or science later on in the book and react to it. Students could also do further research.

Page references are from the Crown Publishers hardcover edition (©2011, 2014) of The Martian by Andy Weir. A paperback version of the book is now available, which would give a reduced cost of purchasing a classroom set.

Instances of profane language are sprinkled throughout the book (although honestly, if I found myself stuck on Mars alone, I’d probably be swearing too). There are a few references to sexual activities and alcohol.

I'll also share a file with mentions of potential science connections in the first suggested chunk of reading (through page 37).

I found The Martian a satisfying read—not only gripping as a piece of fiction, but with the mix of science that was integral to the story. Bringing it into the classroom can provide a similar experience for students, with a chance to read popular literature, but also analyze what they read from a scientific standpoint. They can consider the book and question its representation of science.

What are you reading?