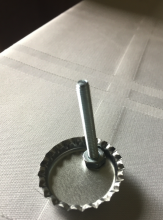 WHAT AM I DOING TO HELP KIDS ACHIEVE?
HOW DO I KNOW WHEN THEY ARE THERE?
WHAT IS THE EVIDENCE?

Here is "cookbook to inquiry" - take II. There is a hydrate lab which is done by many teachers. Typically, students first use a known hydrate and are provided the formula.  As an example, they might use CuSO4 . 5H2O.  On paper, they would work through the percent by mass of water in copper (II) sulfate pentahydrate. They then would be given a mass of the copper (II) sulfate pentahydrate, calculate how much water they should lose and then they would heat it and compare the data with the calculated value. Next, they are given an unknown hydrate. They are also given the molar mass of the unknown salt of the hydrate and they have to calculate the molar ratio of salt to water based on their data. Here is one possible way to “tweak” this lab.

First, students build models of hydrates so they have some sense of what they are on a molecular level. Second, students examine the symbolic formulas of hydrates. It is a common misconception that students think the dot between the formula of the salt and the water means “multiplication” because that is what they are used to in most math classes. Finally, they will be given a known hydrate. They will need to predict the exact mass of the compound after it is heated. The teacher is the only one with the scale. Each student will come up to the scale with their compound after it has been heated, a predicted mass, and a paper showing how they got their answer. The closer they get to their prediction, the better the grade. Next, they will be provided with an unknown hydrate. They have to calculate what the mass will be.  They are allowed to ask the teacher only one question and it cannot be, “What is the formula?” Hopefully, they will figure out that the question should have something to do with the molar mass of the salt.

One last interesting twist to this lab. Students will be using a unique container to heat the hydrates….a bottle cap with a screw. Sounds strange, but I stole this idea from Bob Worley (of CLEAPSS) who showed me how to do this at Chem Ed 2015. I was shocked by how well it worked. I am not against using evaporating dishes or test tubes but over the years students have accidently broken a large number of these items. Am I teaching them to be chemists, or about chemistry? Perhaps some of both. I just want to try to show them that you can do chemistry with almost anything. If you are interested, I took a bottle cap with no plastic (bought off Amazon for a few bucks). Drilled a hole and added a #8 bolt that is 1.5 inches long with a nut. See a microscale poster developed by CLEAPSS and Bob Worley with more information about the device I used with this experiment.

I am coming up to the periodic table in my other classes. I could spend months on this one topic but only have about a week and a half. The plan is to try a new activity from the October 2015 “The Science Teacher”. Some teachers developed an interesting activity in which students combine looking for patterns and history. Next, I hope to follow it up with a TIMU activity that look for trends in more detail. Will any of this work? Honestly, I do not know. So why bother trying something new? Somebody once told me, “I would rather teach 30 years once, instead of one year 30 times.” It is not about change for the sake change. It is not about trying to be better than anyone else. It is about trying to be better than the teachers we were a day or a week ago. It is about going on a new journey with passion and thoughtfulness.  Isn’t this what we want our students to do?