"What are we doing to help students achieve?"

The start of the year is always a little tricky. The start for me is a healthy does of anxiety mixed with excitement. I am excited to get started. I am also anxious. I do not want to bore students with endless handouts that get buried in the bottom of the backpacks. I need to know more about them. I want them to start doing science and we need to go over classroom procedures. Mike Gutekunst, our department chair, inspired this activity in a departmental meeting. He encouraged us to develop this while showing us how we might try to implement the NGSS standards.

This experiment has many purposes. It helps me to get to know the students ability early on. It attempts to help them develop the experimental method. This activity also introduces classroom policies about cell phones.

Students are in small groups. They are instructed to first get to know each other. Each group is provided a whiteboard and asked, "What are the parts of a good experimental design?". The good news is that the students quickly developed an expected list with words like, "Purpose", "Procedure", "Hypothesis", "Independent Variable", "Dependent Variable" and so on...This indicates to me as their teacher something about their background. After having survived a pandemic, I have learned to take nothing for granted.

We shared out with the intent of developing a list of ideas and concepts for doing an experiment. Next students were asked to design a specific experiment. The question posed was "How does cell phone use impact a person's attention?" Again, groups for the most part, developed some really good ideas that we shared out. Most students talked about having two groups, one using phones and one without. There was some type of activity both were attempting. Each group would be evaluated afterward to examine if the use of phones changed the performance of the activity. We now had the beginnings of a plan.

Students broke up into four new groups. Every group was required to watch a 3-minute video on their computers on how to fold an origami butterfly. They could watch, pause or replay as many times as they wanted during the five minute time limit. There are several origami videos online. If you decided to do this as a teacher you can choose your own. My suggestion would be to keep it relatively simple and try it first as the instructor. Also, it helps to use different colored paper for each group. 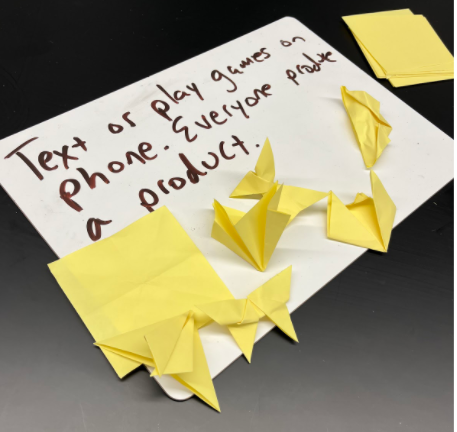 Group one (above) was told to be on their phones texting or playing games while watching the video and making the butterfly.

Attempted origami butterfly while texting and listening to songs on phones. 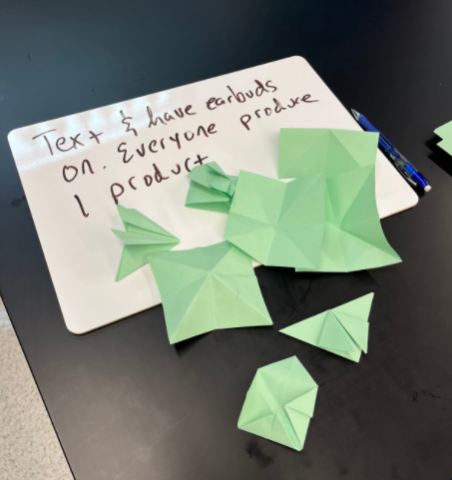 Group two (above) was told to do the same as group one. However, they were also told to have their earbuds in and listen to some songs. Here are their results.

Attempted origami butterfly while NOT on phones or earbuds. 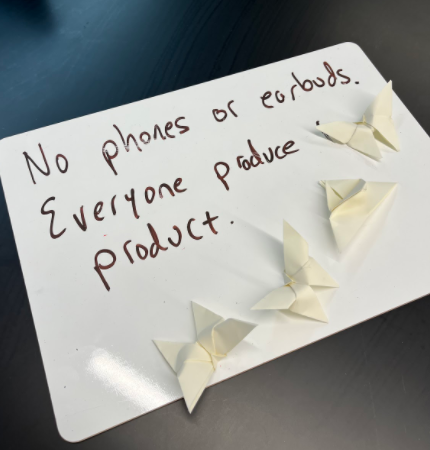 Group three (above) had to make the butterfly while watching the video. Each person had to make one butterfly. No phones or earbuds were allowed.

Attempted origami butterfly while NOT on phones or earbuds. One for each group. 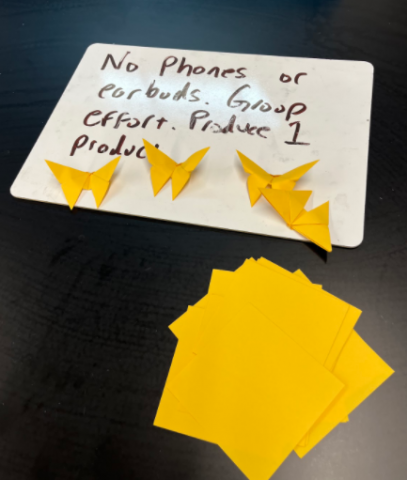 Finally, there was group four (above). Group four had to make a butterfly. They were not allowed to use any phones or earbuds and they only had to produce one as a group.

The results were as expected. Students concluded what most people know. Cell phones impact our attention. It was easy to then let students know that the class and school rule is that cell phones are not allowed unless teacher permitted. We had a good discussion about experimental set up. People mentioned that group four had two variables instead of one. Was group four successful due to working together as a group or because of no cell phones? Great question......We also started to introduce quantitative and qualitative data. How many people were successful? What counted as a successful butterfly? This activity easily was finished in a short class period and provided many avenues of discussion.

Overall, I think this activity is a keeper.  I got to know my students and their abilities. They helped design and do an experiment and they got to know their classmates. I was also able to introduce some class procedures early in the year. Do you have a class activity or idea that works every year? Please share. We would love to hear from you!