The bush fires in Australia have killed an estimated 500 billion animals and caused widespread damage. Can these fires be connected to greenhouse gas emissions and human-caused climate change? What kind of warnings have scientists issued about the possibility of such fires in relation to climate change? To see what scientists have to say on the connection between human-caused climate change and bush fires in Australia, consider the following quotes (most of these statements are from articles published in the scientific literature). The list of studies included below is nowhere close to exhaustive.

“In particular, we find an increased risk of dangerous atmospheric conditions associated with extreme fire weather and pyroconvection for many regions of southern Australia, including in the southeast and southwest where dangerous wildfires with extreme pyroconvection have recently occurred near densely populated regions.”1

“We explore the impact of future climate change on the risk of forest and grassland fires over Australia in January using a high resolution regional climate model…Results show a consistent increase in regional-scale fire risk over Australia driven principally by warming and reductions in relative humidity in all simulations, under all emission scenarios and at all time periods…Our results are broadly in-line with earlier analyses despite our use of a significantly different methodology and we therefore conclude that the likelihood of a significant increase in fire risk over Australia resulting from climate change is very high. While there is already substantial investment in fire-related management in Australia, our results indicate that this investment is likely to have to increase to maintain the present fire-related losses in Australia.”2

“Overall, the simulations provide important information...fire dangers indicate this increase accelerating later this century…a continuation of the trend of increasing springtime fire danger, a gradual increase in summer fire danger, but little change in autumn; an overall broadening of the fire season; an increase in the number of days at the highest range of fire danger at several representative locations around Tasmania, associated with synoptic patterns conducive to dangerous fire weather.”3

“These findings reinforce previous studies showing the potential for major increases in fire danger in southeast Australia under climate change, particularly in spring”4

“Given that the recent increase in [positive Indian Ocean Dipole] occurrences is consistent with what is expected from global warming, an increased bushfire risk in the future is likely across southeast Australia.”5

“The research results reveal an increasing danger under climate change conditions for both of the two contrasting scenarios investigated.”6

“There is no one tipping point. There are many of them, and you might argue we are seeing one playing out right now. The heat and drought has now reached a point where we are seeing unprecedented bush fires here in Australia unlike anything we’ve seen here before.”7

Unfortunately, there are many who deny that humans are causing climate change. It is therefore not a surprise that erroneous arguments have begun circulating in the media at large that the fires in Australia should not be linked to climate change because arsonists set off the blazes. It is true that at least 24 people have been arrested for arson in association with the bush fires in Australia.8 In addition, legal action is being taken against an additional 110 people who did not comply with fire bans or discarded cigarettes/matches on land.8 Consider, however, that these offenses are very common: it has been estimated that half of the 54,000 annual bush fires in Australia are ignited by arson or other suspicious means.9 That’s roughly 27,000 fires ignited by such crimes each year! Why is it only recently that the results are becoming so dramatic? It is because the conditions in Australia are different as a result of climate change, not because the number of arson events has increased. Unfortunately, many are attempting to use the arson excuse to divert attention from the real issue; see below for one such example from a conversation on I’ve seen on Twitter. (Katharine Hayhoe is an internationally renowned climate scientist and director of the Climate Science Center at Texas Tech University. Donnie Jones appears to own a truck rental company). 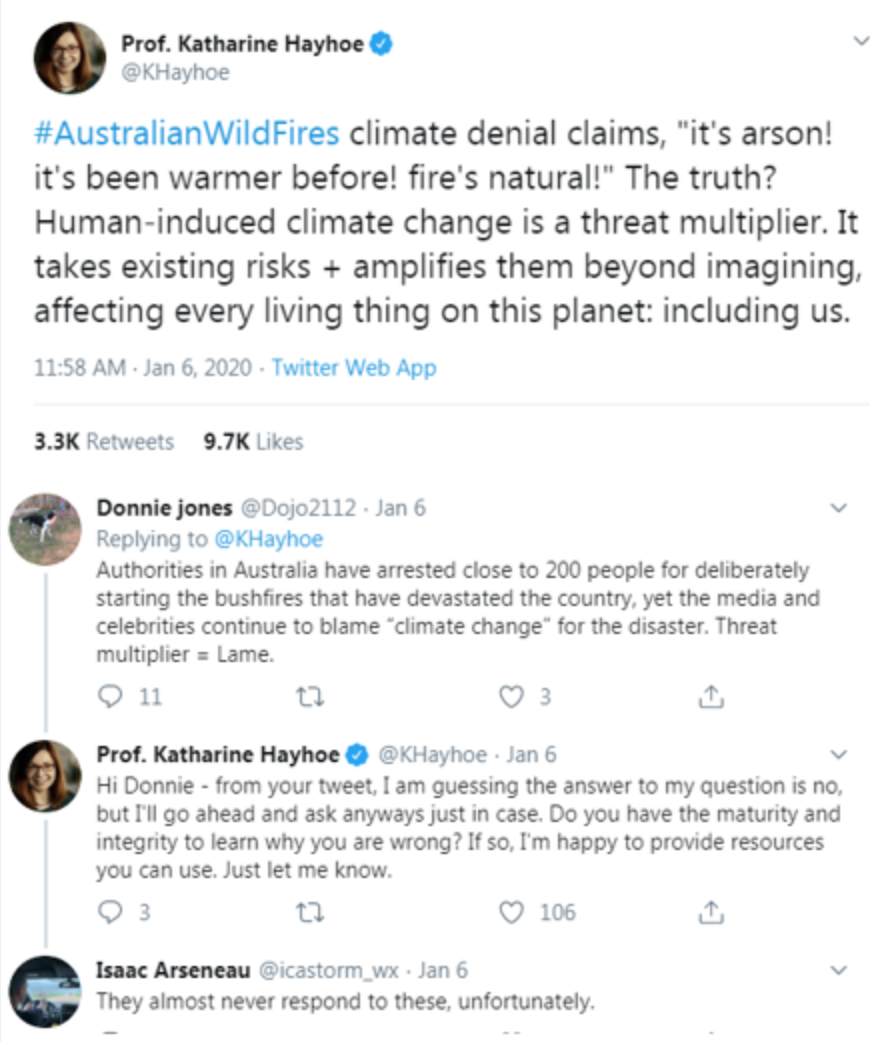 As mentioned by Professor Hayhoe, there are innumerable resources available to help you learn more about climate change or to help you incorporate aspects of climate science into your chemistry curriculum.10-13 I highly recommend the courses on climate science offered free of charge through the EdX platform,10,11 and the American Chemical Society’s Climate Science Toolkit12 is a great resource as well.

9. Australian Government / Australian Institute of Criminology, Bushfire Arson Report: The number of fires and who lights them, November 2009. (accessed 1/8/2020)

Students who demonstrate understanding can analyze geoscience data to make the claim that one change to Earth’s surface can create feedbacks that cause changes to other Earth systems.

More information about all DCI for HS-ESS2 can be found https://www.nextgenscience.org/dci-arrangement/hs-ess2-earths-systems.

Analyze geoscience data to make the claim that one change to Earth's surface can create feedbacks that cause changes to other Earth systems.

Examples should include climate feedbacks, such as how an increase in greenhouse gases causes a rise in global temperatures that melts glacial ice, which reduces the amount of sunlight reflected from Earth’s surface, increasing surface temperatures and further reducing the amount of ice. Examples could also be taken from other system interactions, such as how the loss of ground vegetation causes an increase in water runoff and soil erosion; how dammed rivers increase groundwater recharge, decrease sediment transport, and increase coastal erosion; or how the loss of wetlands causes a decrease in local humidity that further reduces the wetland extent.

Assessment does not include a comprehensive understanding of the mechanisms of how the biosphere interacts with all of Earth’s other systems.