The beginning of the year usually starts with a measuring activity. Tom Kuntzelman has provided a way to quantitatively measure the mentos and diet coke effect. Tom was gracious enough to provide me with a device that could be attached to a twelve ounce diet coke bottle. A Mentos candy can be safely placed in the Diet Coke. The Diet Coke goes up into another pop bottle that has been altered. Students can read the volume of the foam from the rising Diet Coke.

I decided to try to turn this into a graphing exercise. I demonstrated the experiment in class. Students then analyzed a videotaped version of the experiment (see Video 1). I had three different Diet Cokes. Each was at a different temperature. I assigned a different temperature bottle to student groups. They could slow the video down to .25 speed through the settings feature on YouTube. Students were able to get both time and the rise and fall of the volume of foam. This made for a great graphing exercise as well as data analysis (see figure 1). Not only was it easy to examine graphs but students were able to compare and contrast the different graphs and ask questions about the “why”. This also was a nice bridge into gases which was the next unit. I found a demonstration for gases that I had not previously attempted. This summer I visited one of my favorite coffee shops. I tried some “syphon coffee”. It tasted good but I thought the syphon coffee maker was really expensive for a coffee maker, so I tried to make my own (see figure 2). 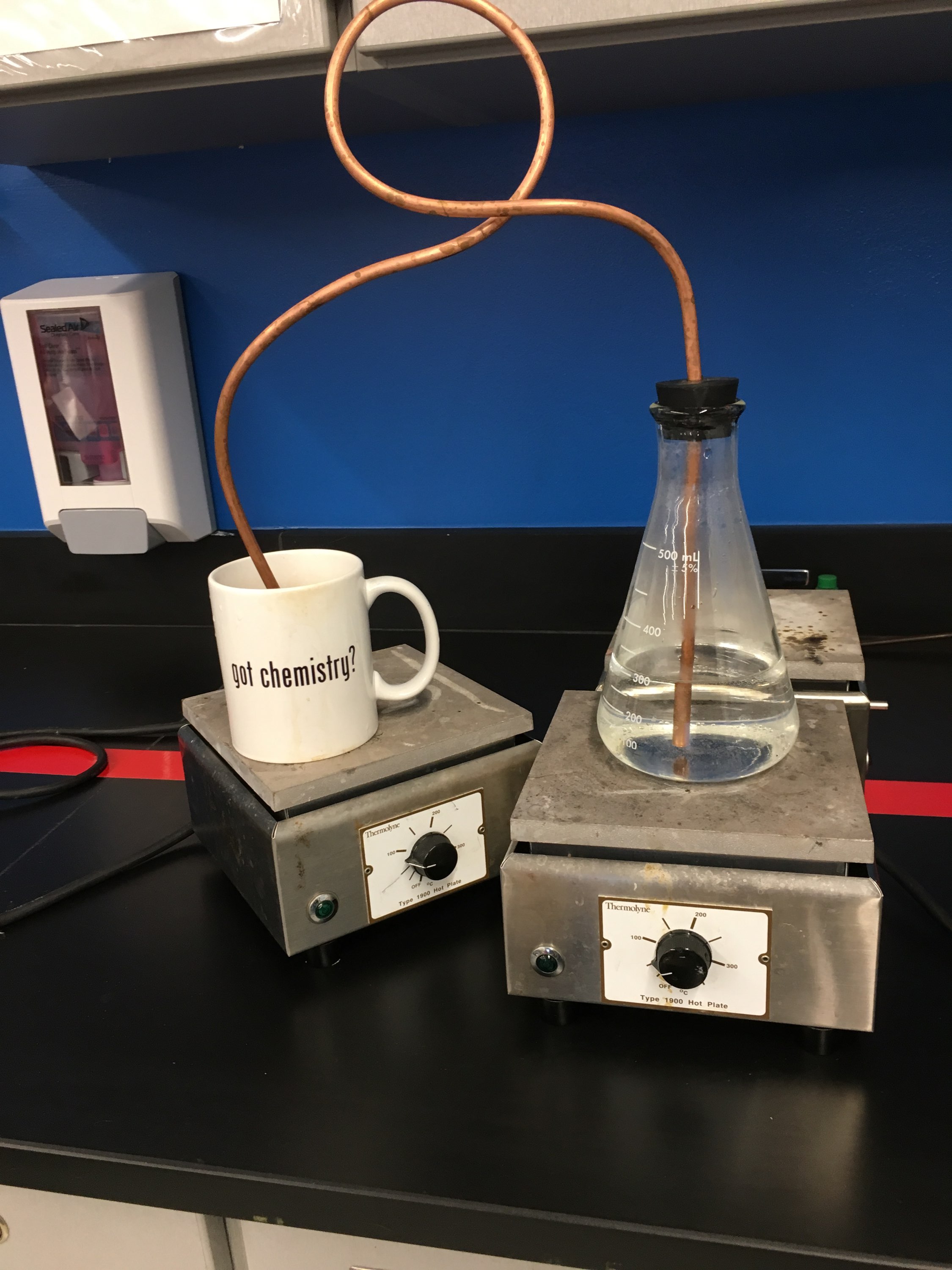 I took a clean 500 mL Erlenmeyer flask and stopper that I bought new online. I drilled a hole in the stopper and I was able to place in some ¼ inch copper tubing. I bought this at a hardware store. It is the same type of copper tubing used to bring water to ice makers. The copper tubing went in a loop and into a small reusable “pod” filter with coffee inside a cup. I filled the Erlenmeyer with a coffee cup amount of water. I made sure the copper tube was beneath the water line and almost touching the bottom of the flask. I sealed it tight. As the water heated the gas pressure increased. The increase in gas pressure was eventually enough to push the water through the copper tube into the filter with the ground coffee. It went through the filter and the ground coffee and then into the cup. I quickly and carefully took the tube out of the filter and placed it in the brewed coffee. I then placed the Erlenmeyer on a cool surface. As it cooled, the pressure dropped, and the coffee went from the cup, through the copper tube, back into the Erlenmeyer. I then told my students that they had to develop a model explaining how it worked in the time it took me to drink my cup of coffee. They argued that between the Diet Coke experiment and the coffee, I drink too much caffeine! Sometimes you just can’t win….they were probably right.:)

I love this idea! I followed Tom and Ryan's altitude and mentos and coke experiment on Twitter and I have been intrigued by it ever since! I have a few follow up questions:

1. When your students analyzed the data, did they see a significant difference between the 4C and the 7C coke? From the video, they look pretty similar but that is just eye balling it.

2. This is more of just a wonder but I immediately thought, "I wonder if another way to analyze this is with Vernier Video Analysis." I'm thinking about if I had each group video a different temperature, I probably wouldn't want to calibrate all of those bottles! Height could be analagous to volume, it would just be a little muddy at the bottom of the bottle where it is not a consistent diameter. Just running through ideas of how to scale it up!

3. I assume the temperatures you picked were room temperature and then the other two were cooled down? Any suggestions from your experimenting on how to get consistent temperatures for measuring?

Also, my weekend project will definitely be building that siphon coffee maker! Thanks for the inspiration!

What is Gamification in Education?