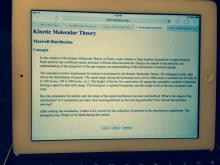 There are occasionally discussions amongst educators about the efficacy of using technology in the classroom. Does it really make a difference? One train of thought is looking at the use of technology through the SAMR lens. Is the technology simply a Substitution? Or does it Augment the learning compared to previous methods of learning the same material. Maybe the use of technology Modifies the learning tasks. Or will the technology actually Redefine the learning by allowing the student to interact with knowledge in a way that is impossible without this technology. With this in mind, I set about to use an iPad app and an online simulation to introduce my IB Chemistry students to the concept of Maxwell-Boltzmann distribution curves. I'm not sure exactly where it fits on the SAMR continuum, but without the simulations I could only show my students the graphical representation of the Maxwell-Boltzmann distribution curve. By using the simulations, I am attempting to help my students develope a deeper understanding of them.

To begin the activity, I used Molecule Lab(1) to show 10 helium atoms moving around in a box. The default temperature was 300 K. I just let it run for a while and asked the students to make some observations and discuss these at their table groups. I sat back and listened in on their conversations. One thing they observed right away is that the atoms all have different speeds. YES! That's exactly what I wanted them to see. Below is a screenshot from the simulation at 300 K.)

Then I had the students visit an online simulation that produces a Maxwell-Boltzmann distribution curve from Davidson College. (2) This gave students a chance to see a Maxwell-Boltzmann Distribution Curve develop over time, leading to another brief discussion about the significance of this from a Kinetic-Molecular Theory perspective. We discussed the range of speeds present and compared that to our observation of the helium atoms from the Molecule Lab Simulation. I then had the students return to the Simulation from Davidson and scroll to the bottom of the page where they could run the simulation at different temperatures and compare different temperatures. Then I showed them a diagram of three different Maxwell-Boltzmann distribution curves for the same gas at three temperatures.3 They could see the impact on temperature on the range of speeds present, and the increase in the most common speeds and compare the nice-and-neat versions to the data they collected in the simulation. (Below find a graph produced by the simulation at 100 K and another at 500 K.)

Next I showed the students another simulation from Molecule Lab with a mixture of helium and xenon atoms. While the simulation was paused right before hitting "start" I asked the students to discuss some predictions with their peers. What would they observe - specifically compared to our earlier observation of helium? And as many of them predicted, the helium does move - on average - faster than the xenon atoms. This all led to a bit of a discussion about kinetic energy. Luckily some of my chemistry students are also taking physics so I got them to lead the discussion relating kinetic energy to mass and velocity. With a higher mass, xenon has to have a lower average speed in order to have the same average kinetic energy. And there's a tie-in with KMT, that temperature is a measure of average kinetic energy. I brought up a diagram showing the Maxwell-Boltzmann distribution curves for helium, neon, argon and xenon all at the same temperature as well.4

All of this is meant to lead into the unit on reaction rates. The IB syllabus requires explanations for many of the factors that impact reaction rate to be based on the Maxwell-Boltzmann distribution. Before actually starting rates I wanted to have the students develop a strong understanding of this statistical model.

What do you use to help your students understand the Kinetic Molecular Theory and Maxwell-Boltzmann distribution curves?