Based on some interactions here on ChemEd X and Twitter, I have been looking for ways to have students generate more questions, ideas, and investigation methods. Some of this is inspired by Argument Driven Inquiry, while some of it is simply my own quest to move further away from being the sole source of information in the class. In this blog post, I would like to talk about how I addressed gas laws using Atomsmith Classroom Online as an investigative tool in place of lab work I did previously using the Vernier gas pressure sensor.

For my mini-unit on gas laws for IB Chemistry, I started with a quick pre-lab handout (in the supporting information below) to get students thinking about the relationships between volume, pressure, temperature, and number of particles. I didn't spend much time on this one, as I wanted the students to think a bit - and then just get started.

Activity 1 was set up as a presentation (in the supporting information below). To complete the activity, students logged into Atomsmith Classroom Online and designed a method of investigating each of the questions presented. In essence, students had four mini-investigations to complete. I took a couple minutes at the beginning of the activity to familiarize students with the "Live Lab" interface from Atomsmith Classroom Online. Then I cut them loose and let them explore. They worked in pairs or groups of 3, with conversation happening throughout the activity. Questions 1-3 of the investigation are all pretty straight-forward. But question 4, "How does the amount of gas (in moles) affect the pressure of the gas at a fixed volume and temperature?" required a bit of thought. The key here is not so much how to change the number of moles - that's quite easy. The issue is how to keep the controlled variables constant. This was a nice bit of problem-solving that students had to accomplish, and I think they benefited from not being spoon-fed the directions and simply following the recipe here. Each of the relationships is pretty straight-forward - and we talked as a class at the end about how they all can connect together, leading into the ideal gas equation.

For context, I have included a screenshot from Atomsmith Classroom Online and the Live Lab (see Figure 1) - where students can monitor and manipulate variables such as temperature, volume, and pressure. 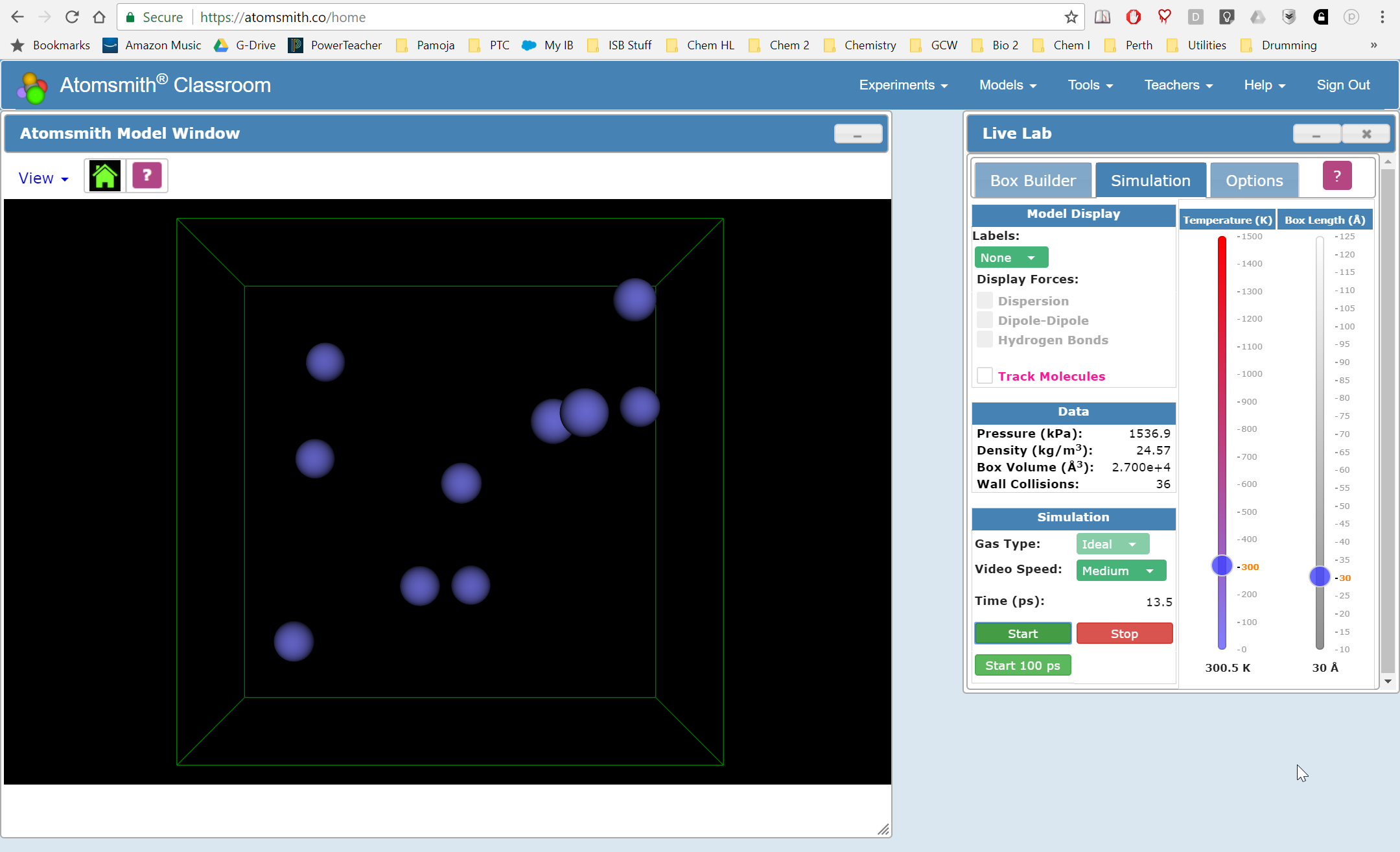 This activity replaces a lab I previously did using the Vernier gas pressure sensors where students essentially completed the same four activities in a lab setting rather than a simulation. Each of these scenarios has benefits and drawbacks. Students certainly benefit from being in the lab - where they have to solve some logistical issues, even though I previously gave them much of the recipe for the lab. The biggest drawback to that is time. When I have students collect multiple trials for five levels, the amount of class time used can stretch beyond what I would like. And that's one of the big advantages of the simulation: It's not nearly as time-intensive. The other benefit is the ability for students to actually visualize what is happening with the gases in a simplified particle model. The students don't know it at the time, but we'll be revisiting the LiveLab to look at Maxwell-Boltzmann distributions during our kinetics unit, so I want them to be familiar with this tool - and the behavior of the particles.

Activity 2 involved using the LiveLab again to explore Avogadro's Law and Dalton's Law using the Argument-Driven Inquiry model of Claim-Evidence-Reasoning (handout provided in the supporting information). This simulation activity also required students to do some creative thinking about how to collect data that would actually provide evidence for their claim. In the end, each group got it worked out - but not without some stumbles along the way. And to me, these challenges lead the students to expand their thinking and learn to be more creative with their problem-solving.

This activity required students to create a whiteboard with their Claim-Evidence-Reasoning outlined and ready to share. My hope was that each "claim" would essentially be a restatement of Avogadro's Law or Dalton's Law (which I hadn't given them yet). I had groups present to the class - and soon realized that I really only needed one group per law, as they all got the outcome I had hoped for. Each group had a claim that was a nice re-statement of each of the laws. The one area that needed a bit more detail was the reasoning. Students needed a bit more detail to support their claim, both with a bit more evidence and reasoning that would actually explain the law.

A few whiteboards are shown below, providing a bit of range of detail within the explanation. 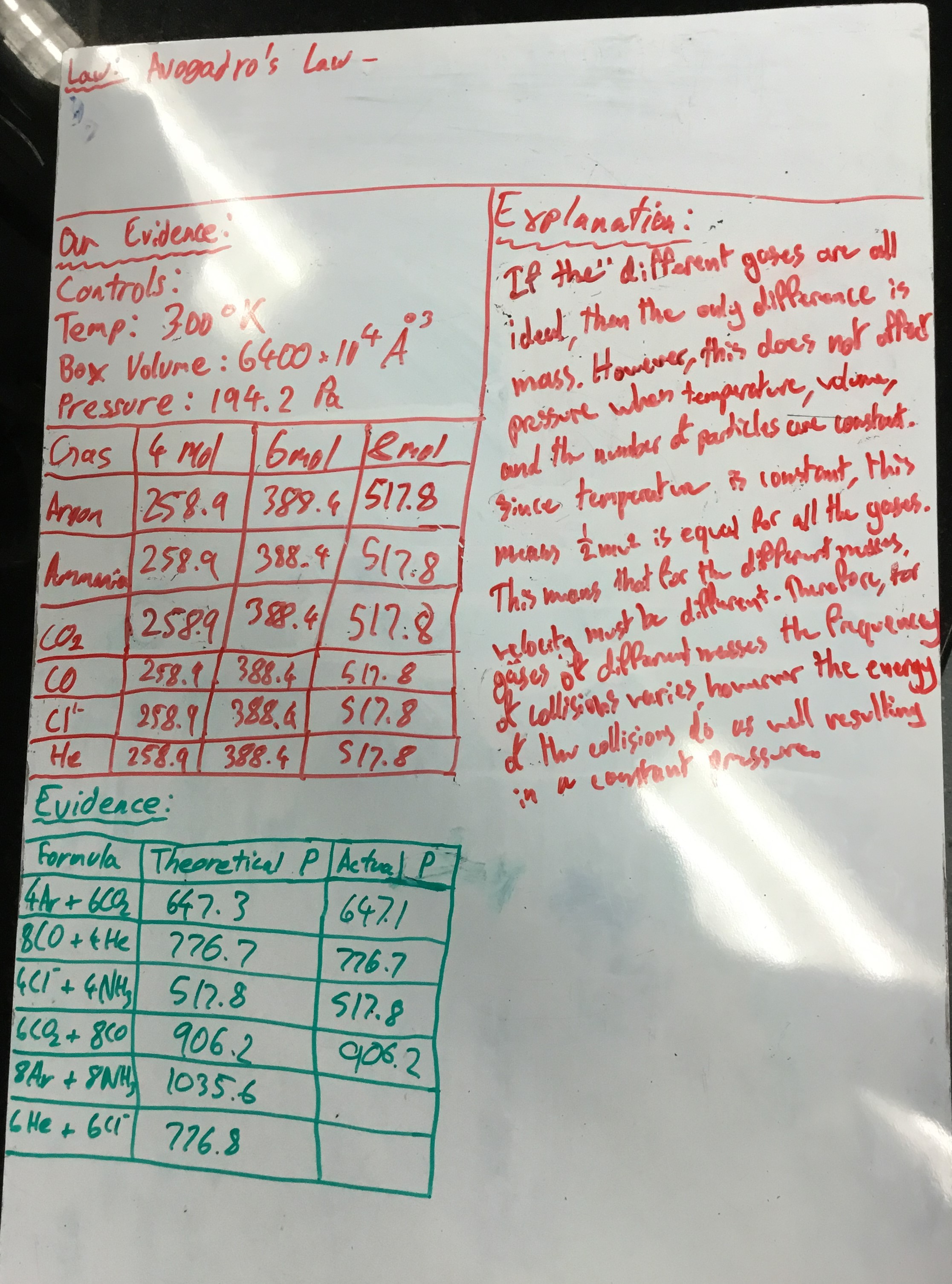 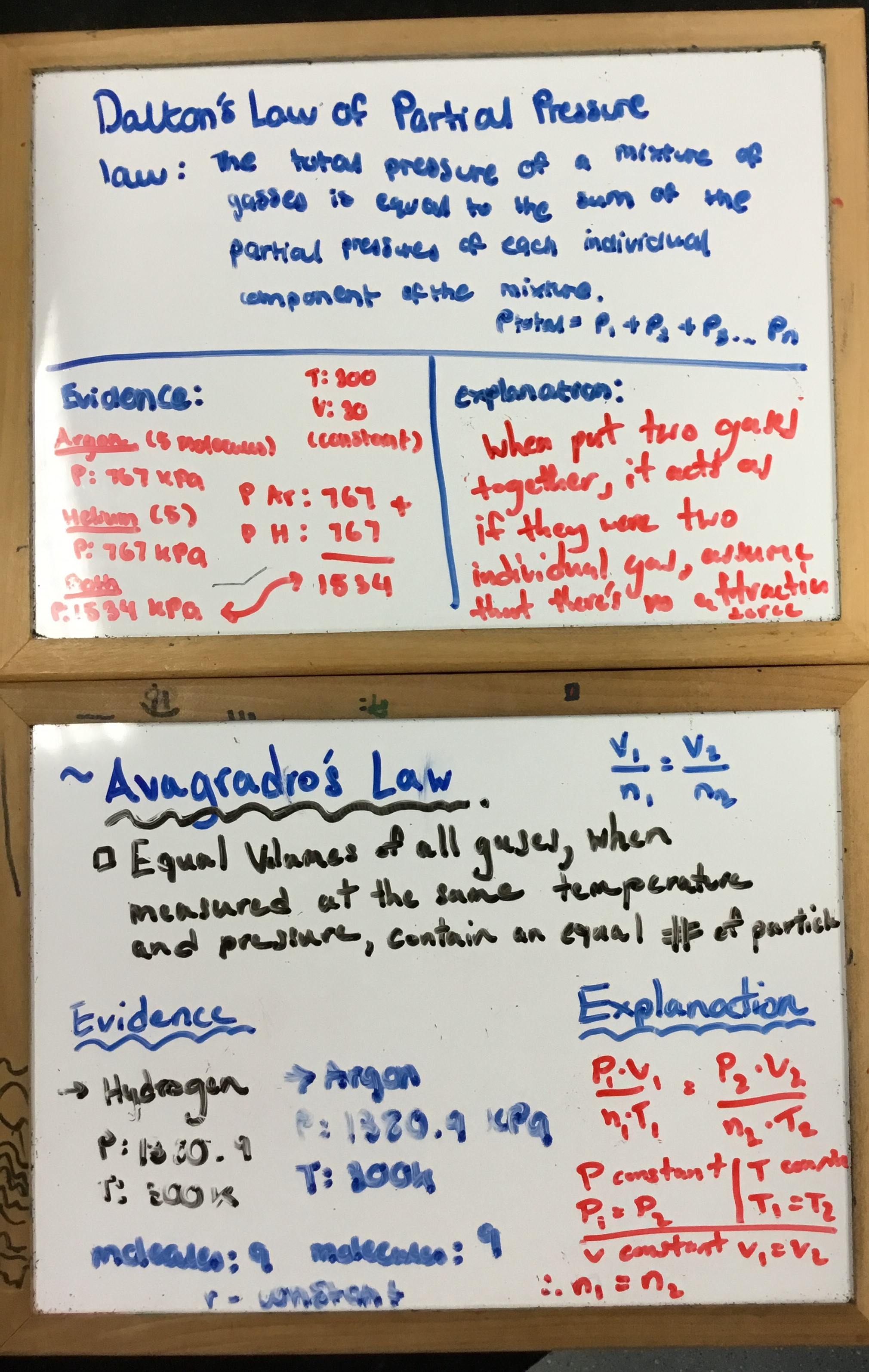 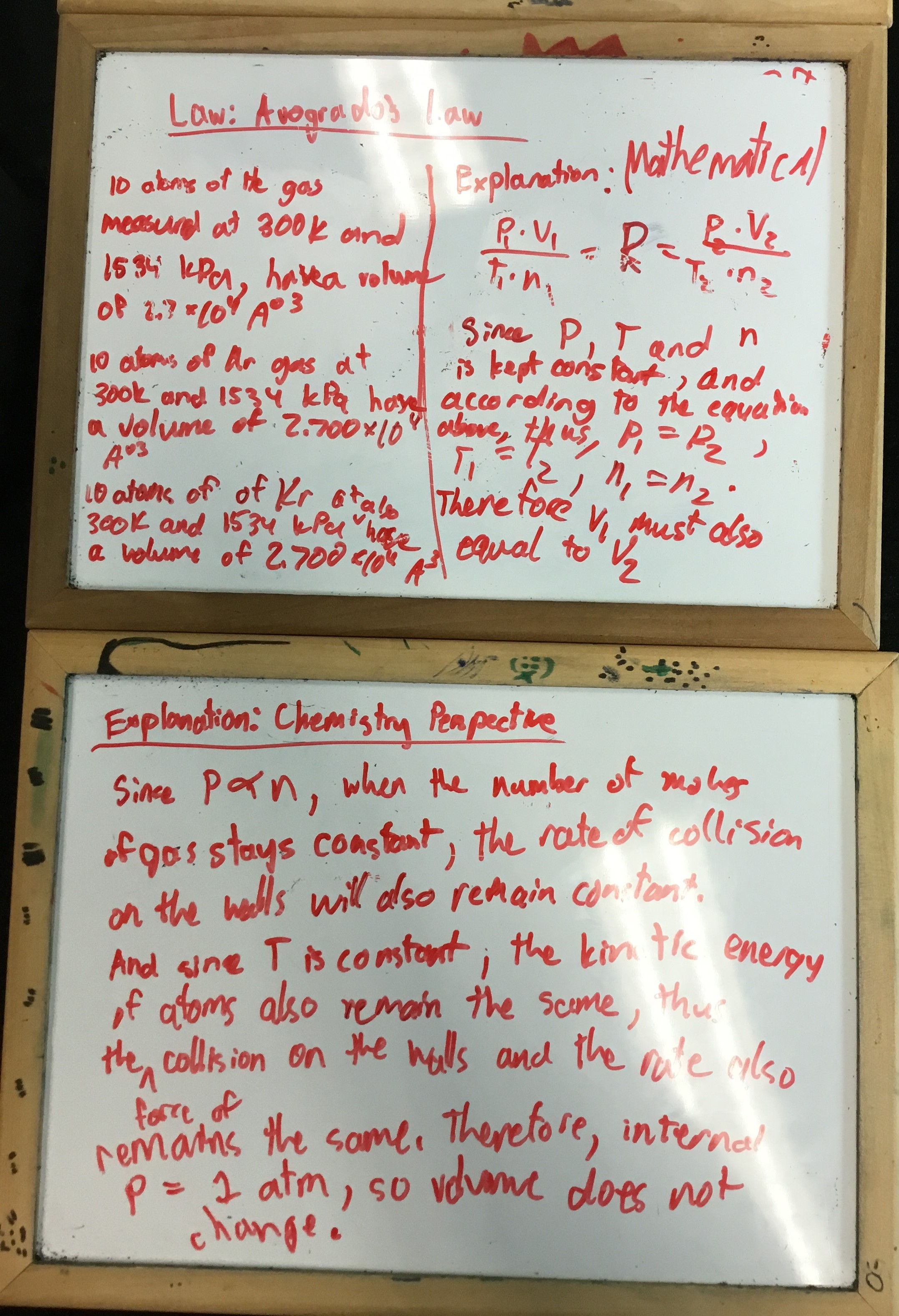 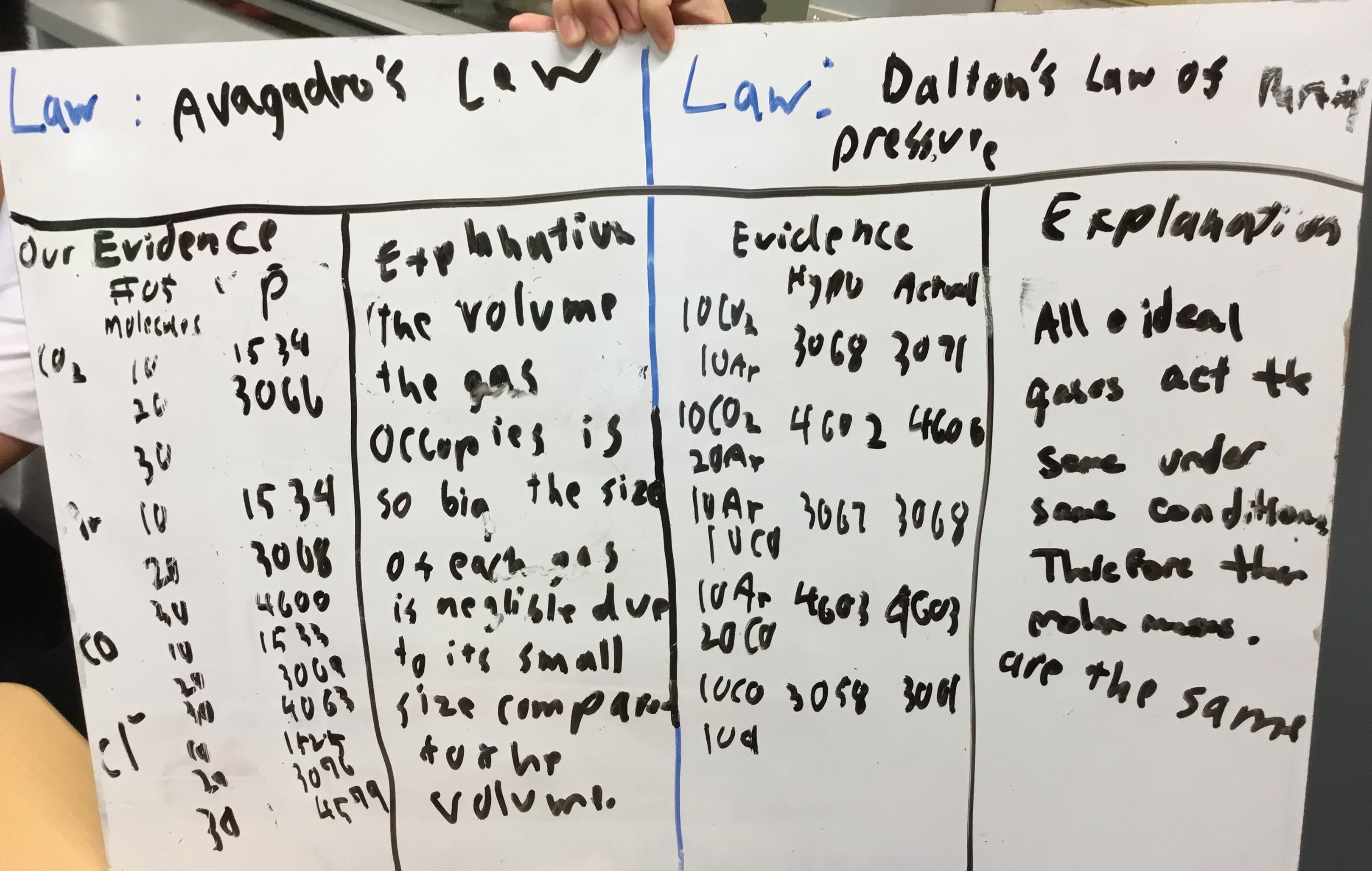 My plan here was to use an online simulation tool (Atomsmith Classroom Online) with some of the ADI framework to have students investigate the properties of gases, along with two gas laws. I often feel like my "closure" of labs has been weak, but with the ADI "whiteboard discussion" I feel that I do a better job of getting students to really process what the results mean to us as chemists - and how does this expand our understanding of matter. While there is always room for improvement, I felt this was a relative success.

What other ideas do you have for teaching gas laws? What works for you?