The importance and difficulty of concepts of the electrolyte came home to me while I was helping a student. She was having difficulty with the idea of an electrolyte. Specifically, she 1) misapplied the maxim "Like dissolves like," and 2) could not distinguish between the terms "dissolve" and "dissociate". In my knowledgeable naiveite, I said, "It's not that hard. It is just the combination of the liquid's mobility with ion's charges.  See, let's make a simple Venn diagram of it." I soon found that there was nothing simple about the overlapping relationships between mobility and charges.

The unspoken word of chemistry: Non-stoichiometric

The two interconnected topics, solubility and charge, are so central to our own materiality that only The Central Science- Chemistry, has the tools to take them from concepts to utility.  Let's start with the fundamental questions/answer set to all chemistry instruction:

Question 1: What is chemistry? Answer 1: Chemistry is making and breaking of bonds.

Question 2: What are bonds? Answer 2: Bonds are stable.

In the context of solubility there is often confusion in the point of view, that is, the difference between being and doing. The solute is being dissolved and the solvent is doing the dissolving. Whether a covalent or ionic compound, the solute consists of a stoichiometric (whole number) ratio of atoms. The solvent (noun) dissolves (verb) the solute. Perhaps it would have been better to use "dissolve-er" rather than "solvent" to emphasize this active nature.

A more formal energetic-based way of describing solubility is "when the free energy of solution with its mobile, intimate environment of solute and solvent is more stable than the separate solvent and solute, a solution can be formed." Because the solute has lost its neighborly constraints (intermolecular forces with those of its same kind), its concentration in a solution will not be constrained as long as the concentration is less than saturation. Thus, the solute:solvent ratio can be described as non-stoichiometric. This brings us to the first Venn diagram: stoichiometry and non-stoichiometry.

The solute has its stoichiometry enforced by covalent or ionic bonds in the compound, and is seen on the left of the figure (blue). Without a making or breaking of bonds, without chemistry, its identity stays the same. Non-stoichiometry (whether in gas, liquid or solid) is based on mobile, transient and rapidly exchanging intermolecular forces. The liquid solution is of particular interest because of its surface boundary, high concentration and mobility at the molecular level allows for non-stoichiometry in a solution. And herein lies the challenge and opportunity of solutions: 1) the challenge- static ratios in a changing environment, 2) the opportunity- mobility giving potential contact and reaction in a controlled space.

One way to classify solutions would be by phase. As for gases, the Kinetic Molecular Theory states that an ideal gas has negligible intermolecular forces and that the component gas species move rapidly and independently. This fits the definition of a solution to the extreme: similar (negligible) intermolecular forces and mobility (rapid, random motion). Molecular liquid mobility is observed in their rapid exchange of nearest neighbors. If the solvent and solute have similar types of intermolecular forces (and boy is there a lot of baggage to go along with this statement), then we have the necessary components for making a solution. Non-stoichiometric solids, often called solid solutions, are rarely encountered in General Chemistry classes because the rigidity that defines a solid typically comes with a strength and regularity of forces holding it together. Compounds that combine the rigidity of structure (typically stoichiometric) with a mobile component (the non-stoichiometric part) are often difficult to conceive and synthesize, but can be technologically very useful such as in battery components and metal-organic framework (MOF) compounds. 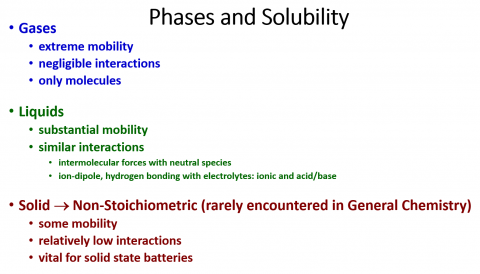 This is nicely illustrated in a recapitulating slide with a Venn diagram of moles overlapping with liters to give the conversion factor of molarity, moles/liter. One could argue that other conversion factors, for example grams/mole, have the same combination of unlocked and locked nature, but not wanting to go too far afield, we will leave that for another blog post. 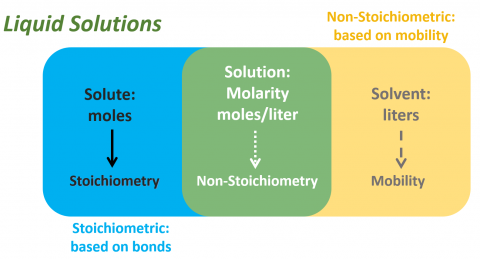 The next post will deal with the type of intermolecular forces and also the nature of the electrolyte. I hope this discussion gives you the freedom to realize that stoichiometry and non-stoichiometry are concepts that combine to make a solution that does not have to be difficult.

Q, K, ∆G and ∆G°: The Darlings of Thermodynamics
Solubility, Stoichiometry and Non-stoichiometry