Seeing Is Not Believing 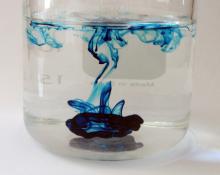 “It sort of started to look kind of like a very pale blue.”

A friend who teaches at the middle school level told me about a science experiment he’d done with his students. The procedure suggested to students that a particular solution would turn blue, but also asked them to write down what they saw happen. The thing was, it wasn’t actually designed to turn blue. Some students made notes similar to the first sentence of this post.

A dirty trick? Or an exercise of a different sort?

It’s an interesting illustration of us wanting to make something “right” or to match it to what we expect will happen based on prior knowledge or experience. Trouble is, chemistry is not a cookbook. There will always be times when an experiment doesn’t work like we think it will or “like the book says.” What about experiments that haven’t been done before (or have never even been imagined yet), that students will do in the “real world”? We can’t detach from the background we bring to the lab bench, but we can be aware that it has the potential to cloud observations of what we do see.

On hearing this story, it brought to mind an experience I had as an undergrad during a physics lab. When a partner and I carried out an experiment related to electric charge, the results were different than suggested by the lab manual. We explained this to the grad student leading the section, who didn't believe it. But then he tried it himself using our equipment and got the same result that we had.

So, with my friend’s story fresh in my mind, I might assume no worries about me being able to observe and write down exactly what I see.

Until about a week later.

I was testing a variation of a paper chromatography experiment for students to first see the dyes present in typical food coloring, so they could be compared to dyes present in candy coatings. Setting up the food coloring separations went smoothly. I ran red, yellow, green, and blue. But the blue… in my head, I expected to see only blue dye. The chromatogram showed blue, but also a bit of a pinkish-red dye. I didn’t want to believe what I saw. My first thought was cross-contamination from the red dye. Running a second blue sample again showed the blue food coloring sample was a mix of blue and red dyes.

If I was a student looking for blue in my friend’s classroom, I’d probably be exclaiming, “That’s not fair!” An unorthodox method, yes, but I think the reminder that our observations can be affected is a valuable one.

Have you seen something similar in your classroom? Do you have ways to encourage students to make the best observations possible?

Interesting post. I have students record observations of a couple different situations at the beginning of my general chemistry course. I have seen the "potato candle" demo several times at science conferences, so I expect you have seen it. More recently, I have seen that demonstration using a cheese stick instead. For new teachers that haven't seen it, I stand a light colored cheese stick in a candle holder. I then poke a thin slice of almond into the top to serve at the candle wick. I place the "candle" out of sight until I am ready to use it. Students get out paper and I post the following on the board: Record at least three observations about the system I am setting up. I am careful to set the "candle" several feet from any students. I light the "wick" and allow it to burn for a minute before I blow it out. I ask several students to share their observations and I record them on the board. I consistently hear observations about the candle, wick, melting wax, burning wax. Some observations are fact, but at least a few end up being assumptions. I don't point out any errors. I just pull the cheese stick out of the holder and take a bite. After some giggles, I allow students to come closer and they are able to see what the "candle" was made of.

The next day, I set up two 250 mL beakers in front of the class. One beaker is half filled with water and the other is 2/3 full of alcohol. I ask the class to make observations again. I pick several students to share their lists. I then add an ice cube to each beaker. I ask students to add to their observations. They may change any previous observations that they made. We end up discussing density of water vs. alcohol and observations vs. assumptions.

I feel like spending a short amount of class time over two days works well. I could use some other ideas to add later in the year to see if they have retained the lesson.