Rainbows in a Glass Density Demonstration 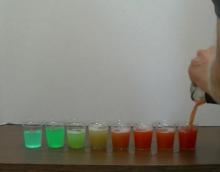 I told Paige (my student) that I had never seen the rainbow shots trick done before, so I had no idea how it was accomplished. I proceeded to suggest to her that attempting to determine how the rainbow shots trick was done would make a great end of year research project. We also decided that it would be neat if we could modify the rainbow shots trick such that only non-alcoholic liquids were used. That way, we could use the trick as a chemistry demonstration appropriate for school aged children. If you like, you can scroll down and watch the two videos below to see how to do this experiment as a chemistry demonstration using only household materials suitable for school aged children.

We learned that to pull off this trick, bartenders use liquids of very different densities: grenadine syrup (D = 1.18 g mL-1), pineapple juice (D = 1.01 g mL-1), any clear and colorless alcoholic drink (like vodka or rum; D = 0.9 g mL-1) and blue curacao (D = 1.11 g mL-1). When preparing the drink, the first three liquids are added carefully into a small pitcher one at a time to make a “density tower”. The most dense grenadine syrup is placed on the bottom of the pitcher, followed by pineapple juice, then the alcoholic drink. When carefully added, the liquid layers stay separate on account of their very different densities. Just prior pouring the drink out of the pitcher, the bartender adds the blue curacao. As quickly as possible after adding the blue curacao, the drink is poured from the pitcher into a series of glasses. A rainbow of glasses is produced!

After much trial and error, Paige and I discovered that we could perform the rainbow shots trick using grenadine syrup, pineapple juice, 91% rubbing alcohol (D = 0.91 g mL-1) and a 50/50 mixture of blue Dawn detergent and water (D = 1.04 g mL-1). In the first video below, you can see Paige demonstrating this experiment. In the second video below, I describe in detail how to prepare and perform the experiment. A word of caution: results vary widely from experiment to experiment. Also, technique is important, so be sure to practice several times before doing this experiment for your students.

This activity provides many opportunities for students to engage in inquiry learning. Students can be challenged, as Paige was, to replicate the rainbow shots trick using liquids appropriate for use by young students (mentioning that this trick is used in bartending is at the discretion of the teacher). Further, students could be challenged to perform this experiment so that the fluids are poured out in reverse order: red orange, yellow, green and blue last. If anyone figures out how to do this latter experiment, be sure to share your recipe with me!

Thanks to Paige Marken for working out the Rainbows in a Glass Density Demonstration, and to Kristen Lewis for helping to perfect it.