The Evolution of Technology in My Classroom 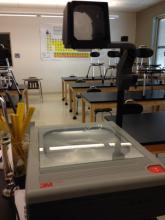 It was 1990 and we were labeled the most technically advanced high school in the country (for whatever that was worth). What it really meant was we were networked and every classroom had at least one networked computer (Old IBM machines that did not even have a hard drive) and science classrooms had six computers. Might seem kind of weak today but in 1990 it was a big deal. I was just happy that I had a working overhead projector to do demonstrations on.

I have always been very fond of writing on dry erase boards. I liked the color options and how nicely they cleaned up. I also used my white board as the screen for my overhead projector and was able to augment the overheads by writing on the board. For you younger folks I am sure Smithsonian has an overhead projector you can look at.

This year they installed a built in projector for my laptop and iPad. I now take roll online and submit grades the same way. I do have a program that allows me to “Write” on an Keynote slide the same way I did on the white board. This projector led my new colleague and I to really talk about what parts of technology have helped our classrooms.  Having information available to our kids at a moments notice has caused us some headaches. Students tend to search for every answer rather than think about the questions.

So far I have only found one or two things I can’t do with the built in projector that I could do with the overhead. I liked to put a microplate on the overhead and do some FeSCN reactions and allow the class to see the color changes that way. The chemical sunset is also a similar situation. The second is I have a nice piece of Icelandic Feldspar that I put between two polarizing filters to show the way it bends light when I talk about isomers. I think I will just keep my overhead around for these demos.

Did I forsee any of this when I started teaching? I would like to think that some of it was obvious. I had grown up watching reruns of Star Trek “The Original Series” and The Next Generation made it’s debut my senior year in college.  But the reality is I do not think I envisioned it. Has it changed my teaching? Most definitely, but not completely. I still find it very advantageous to bring kids to the board to write chemical formulas, balance equations, and solve mole problems. I do not think that will ever end. Maybe in the near future their work at the board will be recorded by a smart board (but not likely looking at the funding in my district).

Nice reflection on the evolution of technology in the classroom! A tool I have found that pairs well with my projector is my iPEVO document camera. I don't really use it for documents but it works great for magnifying hard-to-see demos and it is super affordable! That might be one alternative to the overhead projector. I think the overhead is still the best way to show polarizing filters though (the geologist in me loves that demo!).

I have one of those cameras also and am just starting to play with it.

I am sure many out there including me would love to see that demo.  Thanks for the post!

Very cool! Thank you for posting.