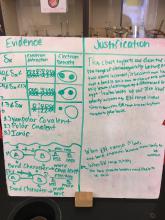 I first learned about argument driven inquiry through Ben Meacham's post (thanks Ben). The post got my attention. I was interested in both the stoichiometry; lab and the way that it was presented to the students through Argument Driven Inquiry. This lead me to the Argument Driven Inquiry (ADI) website. The website provided many resources. These resources proved to be a support for getting started in the process of ADI. I bought the ADI book and tried a lab that is describe here. Since then, I have tried the process of ADI in a few different contexts with positive results. Here are some ideas and methods that have been a result of these attempts.

As mentioned before, the pedagogy of ADI is a process that mimicks what scientists do. First, the class develops a guiding question with the help of a teacher. Students work in groups to develop a potential plan and investigation. They must defend their ideas and can change their ideas. They are allowed and encouraged to talk to other groups. Students write a rough draft after they have completed their investigation and other students peer edit through a blind peer review. Finally, they individually take ownership of their ideas in a final report.

A group of my students worked through a second ADI lesson. The essential question was "How does electronegativity of atoms effect bond character and polarity?". Students developed an investigation with evidence. They used the evidence to support their claim through the "justification" section. I, as the instructor, told them what they could do, but I never told them if it was right or wrong. They could freely go to any other group. Students also had to listen to other groups provide their evidence and justification during a short group discussion. Students wrote rough drafts and did peer reviews. Each student turned in a final one page report. Here is what I noticed as a teacher.

Instructor as a Guide - Most of my work was as a guide and a facilitator. refused to provide the "right" or "wrong" answer. I told students that they could talk to anyone else in the room.

Leveling the Playing Field - All students started with the same question. High performing and struggling students found themselves in the same boat. Students did not know the answer initially and had to depend on each other. This, I believe, provided a comfort level for students who are sometimes shy about asking questions to actually ask more questions because they see that everyone is asking questions.

It is O.K. to be wrong - The process of ADI encourages a sense of exploration of wrong answers. Multiple rough drafts and discussions with a variety of groups forces students to examine a variety of explanations. Students are forced to take in different ideas and justify their answer based on data.

ADI Supports the Scientific Process - Students develop questions. They do experiments. They debate ideas. They also do blind peer reviews. During one class a students said, "How come we can't just trade papers in our lab groups?" I explained that the best people still sometimes have a bias. I was also able to contact a friend who is an editor of a scientific journal. She confirmed that they are careful to do blind peer reviews before a paper is published in an attempt to eliminate bias.

Informal Data- Students soon realized that I was not going to give them the "right" answer. They started to debate among themselves. The conversations were truly inspiring. I heard "scientific" conversations from students who were normally quiet. The amount of participation was inspiring.

Grading - There were not group reports. Everyone turned in their own. I dreaded the amount of reports. However, after group discussions and peer reviews, the vast majority of the reports were really good and easy to grade.

Take some time to check out ADI. It is a method that is user friendly for students and teachers. The few times I have attempted the process I have started to see a nice change in the culture in my classroom. If you try ADI, please consider posting your comments here. You might also consider submitting a guest blog post. I would love to hear how it goes and how your students do.

I have also been dabbling in the world of ADI these past two years and have really loved it. I use the "Rate of Dissolution" activity and it always goes well. It it sometimes difficult to find open-inquiry activities that also deliver content well. I think that ADI does a great job allowing students to experience the scientific process while still providing a significant dose of content. I love the inclusion of the claim-evidence-reasoning framework as well. It is an opportunity for my students to practice using data to justify a claim without having to write a full lab report (which I admittedly dread grading!).

This is great.  After reading this, I'm planning on giving it a go next week!  Could you help clarify a few things?

1) Did your students use iPads or PCs?  It says "real molecules" tab in the simulation isn't supported by HTML5 so it's not accessible via iPad (we're 1:1 iPad).

2) I noticed that the cover image from your post includes data.  On the far left column, the symbol that they used looks like the symbol for "partial charge" but it seems to be communicating a range of electronegativity values.  Can you provide some clarification on the use of that symbol?  I may totally just be ignorant of the extent to what it means.

3) Did those students come up with the model of different amounts of people on either side of the rope playing tug of war or is that something you all discussed as a class and they incorporated it?

4) Did you take some time clarifying what certain concepts like "electrostatic potential" and "electron density" meant before the investigation began?

5) Could you provide some clarification as to what exactly you expected them to turn in?  If possible, I'd love to see an example report.  I can provide my email if need be.

Sorry for all the questions!  I'm still relatively new to ADI and I often find the answers to my questions aren't found in the ADI book.

Any help would be appreciated, thanks!

1. We used chromebooks and atomsmith.

2. It is a symbol that means "partial".  Not sure of the name of it but we are trying to convey in covalent compounds which are polar that one side is "somewhat" negative and the other is "somewhat" positive.

3. The "tug of war" analogy came from an Atomsmith activity.

4.  Did not clarify between electrostatic potential or density.  Probably should have.

5.  Each student turns in a one page version of the whiteboard argument.  There is a guiding question, claim,evidence and justification.  They can change their ideas based on the whiteboard arguments.  They turn in a rough draft that is peer reviewed (no names are on it...just codes...it is a blind review).  Finally, they submit a final draft. Pauling also proposed a measure of polarity called percent ionic character (%IC) that describes the extent of valence electron sharing between two atoms in a chemical bond. Percent Ionic character can be derived from the experimentally measured dipoles. Atomsmith reproduces a chart ("Percent Ionic Character Chart") from Pauling's original electronegativity paper that plots  %IC vs δχ for a large number of diatomic molecules. (As expected, the points on the plot fall roughly on a diagonal line -- confirming the correspondence between δχ and bond polarity.)

The chart really drives home the point that covalent vs ionic bonding is a continuum.

I'm not sure what Chad's students' whiteboard says about "real gas"simulation (the figure above is really small -- how were you able to read it?), but Atomsmith Online's simulations are all HTML5 and run great on iPads.

Let me know if you have any more Qs.

p.s. The ADI stuff looks pretty interesting. (And it's nice to see the students using Atomsmith to build and test their claims.)