Something about Ben Mecheam's Blog, "Using Evidence to Determine the Correct Chemical Equation: a Stoichiometric Investigation" really got my interest. First, I was interested because my students struggle with stoichiometry and I am always  looking for new ideas to approach it. Second, I have never seen it done this way and had not heard of the book he was using. Also, I thought the approach was new and novel. I was able to get a copy of "Argument Driven Chemistry" and here I will share what I discovered.

There are two aspects about this book that stand out. First, there is the content. I quickly looked at the thirty plus activities in the table of contents. I found activities that could be used for a general chemistry class, advanced and even AP. The materials were well organized and each topic that I have examined so far provides more than enough information for the instructor.  Also, it was written and reviewed by practitioners.

The second and most impressive  part of the book is the pedagogy. It is not just the topics but how they are presented. Argument Driven Inquiry takes a different approach than some other inquiry programs. Here is a general framework of how students and teachers approach a problem in science in a Argument Driven Inquiry (ADI) classroom. (By the way, the website Argument Driven Inquiry provides ample support, ideas and graphics if you want to try it in your classroom...I would encourage you to give it a look.) Here are the general steps for a lab. These are also similar to the steps I tried with my students the first time I attempted this method. The first lab activity we tried was about moles. Students were given a container that contained one of six known substances. The container had a letter and the number of moles written on the container. They had to figure out which of the six compounds they might have in the container.

2. Design a method and collect data. I had individual lab groups agree on the method and data collection. I did not tell them if they were correct or not. I simply gave them the green light to try and made sure they were being safe.

3.  Develop an initial argument. Each group stated their "Question", "Claim", "Evidence" and "Justification" on a whiteboard once they collected and processed the data. See figure 1. 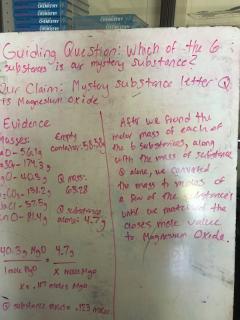 4. Argument Session. Students now go around and look at other student's ideas. I had each group do an "elevator" pitch. They had about 30 seconds to a minute to sell their ideas to other students.

5. and 6. Reflective discussion and Report.  These two meshed together. Students could discuss, keep or change any ideas as groups and individuals. Next, as individuals, they wrote a one page report that was the same format as the whiteboard. They could keep or change any ideas they received from their group or the class. I had them submit the report through "Google Classroom" electronically (see figure 2).

7. Double blind group peer review. Every name on each report was deleted. A code was put in place of the name and three copies were printed. Students received mutliple copies. They were asked to read each one and make comments on the paper. Argument driven inquiry provides rubrics. Essentially, I asked students that if they were reading this report, would it make sense to them? If not, why not?  Students then received multiple copies of their rough draft and the critiques. They could decide what information to use in their final report.

Overall, I was extremely please with this process for several reasons. In guided inquiry activities, I constantly find myself having to provided different types and amount of guidance based on the students. Students determine the guidance they need from each other in ADI. The vast majority of students not only found the correct unknown but did a really good job of explaining how they came to their conclusion. Many individuals solved for the unknown in ways that I would not have but they still found the correct answer and showed their work. I was totally o.k. with their arguments and answers. Finally, and probably the most important reason I will start using this method more often is that some of my students that I have struggled to engage, we indeed highly engaged and motivated in this process and they did a great job. This alone is enough to sell me on this book. I can highly recommend it. 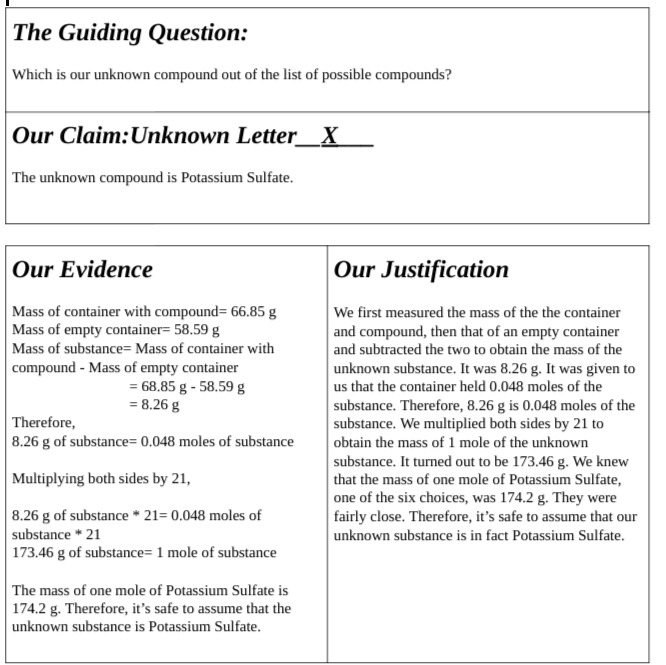 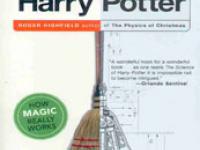 The Science of Harry Potter: How Magic Really Works