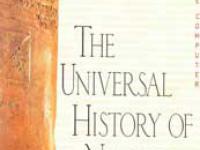 The Universal History of Numbers: From Prehistory to the Invention of the Computer