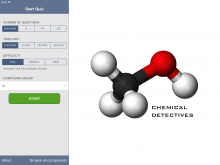 The new IB curriculum includes compound identification using NMR, IR and Mass spectroscopy. My current high school lab does not have any of these available. And that's no surprise, given the cost of these machines is far out of our budget. And while some of you may be lucky enough to have a connection to a local university or college, for the rest of us what are the options when it comes to teaching spectroscopy?

On the recommendation of a coworker at my current school, I tried the FREE iPad app "Chemical Detectives." (Link HERE to the app.) The app has quiz mode, offering the user percent composition, C-13 NMR, 1H NMR, MS and IR spectra. In "easy" mode, the user selects from four possible compounds. In "medium" and "hard" modes, the user must type in the name. The compounds stored in the database pop up as you type. For example, for one compound that I thought was pentanone, I started typing "pen…" and got the following: 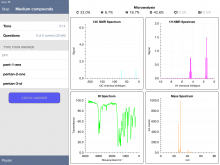 And if quiz mode doesn't interest you, "Browse All Compounds" is an option. The database contains quite a number of organic molecule types, including alcohols, aldehydes, amines, carboxylic acids, esters, ethers, halogenated compounds, hydrocarbons (including alkanes, alkenes, and aromatics), ketones, and compounds with nitro groups. But that's enough about me exploring the program. I'd rather discuss how I used it in my class. As mentioned earlier, the new IB syllabus for Exams 2016 contains a topic on spectroscopy, and covers MS, IR and 1H NMR. Students are expected to be familiar with the spectra from these techniques, and should be able to deduce the structure of simple molecules when given the appropriate data.

I handed out the iPads and gave the students a brief introduction to the app. Then in their groups (2 or 3 students per group), armed with a whiteboard for drawing structures, they dove in and began identifying compounds.  All of the groups started with easy questions, with a few of the groups wanting the challenge of medium. Given that there were some classes of compounds (e.g. nitro) that we don't cover for the IB syllabus, this proved a bit challenging. Below is a screenshot of a student whiteboard with some structure brainstorms based on the quiz question. Below are some screenshots from within an "Easy" Quiz. One nice feature of the app is the ability to expand a spectrum - and even zoom in to get more detail.

Screenshot For Question 1 of Easy Quiz 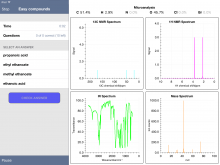 Screenshot of Zoomed In IR Spectrum 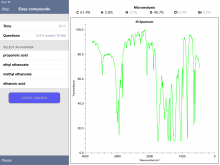 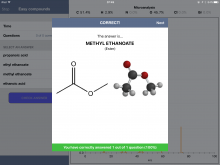 As for student feedback, I asked two questions.

On a scale from 1-5, how useful was “Chemical Detectives” at helping you understand spectroscopic identification of compounds. (5 is most beneficial, 1 is a waste of your time)

Provide some justification/explanation for your answer to question 1. What did you find most helpful? What wasn’t beneficial? Any suggestions for improvement?

The average rating for question 1 was 4.24, and a distribution plot is shown below. From this data, it's clear to me that students generally felt they benefited from using "Chemical Detectives" to improve their understanding of spectroscopy.

The students that selected 4 and 5 wrote positive comments in their justifications. A typical example from a student: "Getting a hands on experience at actually making use of the different graphs that we have learned was very interesting. I feel like it really consolidated my knowledge and it was far more engaging than practice problems."

From the six students that selected 3 from question 1, the predominant theme was how to improve the process. This student answer is representative of the overall theme from this group of students: "It would have been better if you could have gone through the process of identifying the compound for about 2 questions at first so then we know what we need to be doing in order to solve the questions." And I think this feedback is critical. Upon my own reflection -and coupled with this student feedback - taking the time to go through an example on the projector before they start would have been a great way to make the time on the app more productive for the groups. Most of the groups spent at least a few minutes just trying to figure out how to zoom in on the spectra and go about the process of identifying molecules. Some guidance would have streamlined that process and gotten them to analyzing spectra faster.

A few days after introducing the app, when the students were given about 20 minutes of class time for review the day before our spectroscopy quiz, a few of them went back to the app for practice.

I really liked the "real world" aspect of the app. Students get to see real data for the compounds and make decisions about the structures. The combination of spectra gives students a chance to see the strengths and weaknesses of each type of spectrum. For example, they began to notice that IR was really helpful if there were one or more oxygen atoms in the structure, as the -OH and -C=O bond both produce quite distinctive peaks.

One real benefit based on my observations is that students can work at their own speed, with what I call "self-differentiation." Groups that needed more time could draw out possible structures on a whiteboard, working to identify the number of different chemical environments for the hydrogen atoms to see if their proposed structure matched the NMR. And groups that were more adept at identification could work through quite a few structures within one class period.

And as mentioned earlier, the combination of spectra allow students to meld the information together into plausible structures for their answers. And if they were curious about a particular compound they could browse for that compound and explore the spectra to see if they match expectations.

And while I will certainly use this program again next year - and thought it offered real value to my students - there are a few areas where the app could be improved. I offer these respectfully, because as a free app I think it really hits the mark. 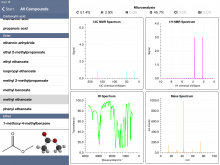 Additionally, some 1H NMR spectra are incomplete. My students were working through a problem and were a bit stumped by the combination of data offered. The IR showed the broad -O-H peak along with a distinct peak at about 1700 cm-1 indicative of the carbonyl. So they proposed ethanoic acid based on the molecular mass and the presence of oxygen in the mass-percent data. The problem was the 1H NMR data only showed one peak (without hydrogen integration). Compared to the IB data booklet values, this appeared to be the -CH3 from ethanoic acid. So where's the peak for the hydrogen of the -OH? It turns out this peak is typically at a chemical shift of 11.4-11.5 ppm. Within Chemical Detectives, the 1H NMR spectra only go to 10 ppm. So this peak is completely absent from ethanoic acid. 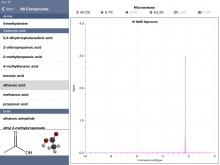 From a teaching and learning perspective, it'd be great if students could go back to the spectra after a missed question while in quiz mode. That would allow them to analyze where they went wrong. Since this isn't an option, I simply told them to write down any missed compounds and go back to them.

Overall, though, I'd rate this app 4.5/5.0 stars. It's an excellent way for students to practice spectroscopic identification of compounds.

Have you tried this app? If so, what did you think? What suggestions do you have for the next time I use it in class?

Do you have other chemistry apps you've found really useful that truly expand the learning environment? I'd love to hear your suggestions.