The Sweet and Delicious Chemistry of Brownies 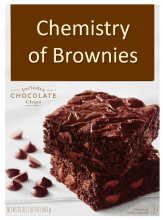 Like a lot of folks (including students), I love brownies. My teaching style and objectives emphasize the applications of chemistry learned in lecture to everyday consumer products familiar to students. Food is a common theme. In this short blog I'll share some questions developed that use the information on the backside of a dry mix brownie box. The information then is converted into questions that emphasize certain core topics covered in GChem 1. Commentary is included for a couple of the questions.

The questions below are typically part of a classroom Think-Pair-Share (TPS) activity. In the classroom TPS activity students self-assemble into groups of three (or two), the question is asked, the group comes to a consensus, then the group finds another group that has a different answer/response/conclusion. The two groups reconcile their differences and collectively (six students maximum) come to a consensus. Discussion and/or the answer follows along with more discussion, if necessary, to clear up any confusion, misunderstanding(s), or misconception(s). Though done using the TPS format, other higher engagement techniques such as jigsaw or just-in-time-teaching (JiTT) could be used just as effectively.

Let's begin. Figure 1 below is the backside of a popular dry dark chocolate brownie mix box used for the following questions. The questions are in no particular order. 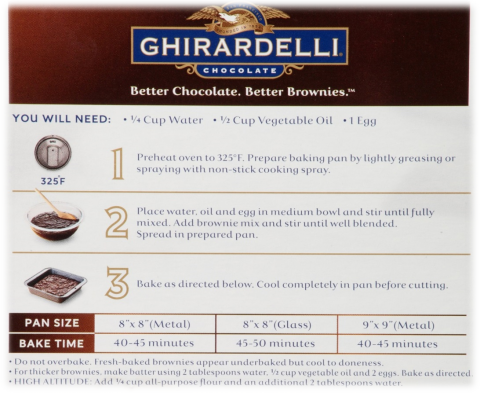 Q: On the brownie box is stated Better Chocolate. Better Brownies.TM We've all eaten chocolate but what exactly are we eating? What molecules eventually end up in our stomachs? Let's take a look. First, chocolate is made up of hundreds of different molecules. One of the five molecules below is the molecule in chocolate linked to the 'feel good effect' some get after eating chocolate. So which molecule below (1-5) then is the 'feel good' molecule? Use the hints below to figure out the mystery 'feel good' molecule. Compare your answer with another group that answered differently. Reconcile the differences. (Note: Students should already know what the following abbreviations mean but they are included here for clarity: IHD = index of hydrogen deficiency; EF = empirical formula; MF = molecular formula) Author commentary: You may be wondering why organic molecules (introduced about week 4 of a 15 week semester) in GChem 1. I don't do VSEPR. Why? First, because students do nothing more than memorize a bunch of stuff (that's what I did too long ago) only to forget it (ditto for me). And second, it's boring to teach. Instead, prior to this TPS activity students have spent two consecutive weeks in lab building organic molecules with organic model sets. So coming into the activity, they know hydrogen, carbon, nitrogen, and oxygen form 1, 4, 3, and 2 bonds respectively. Knowing this from prior learned knowledge, that's why the nitrile group in choice (4) does not show a triple bond nor do the amino groups show the individual N-H bonds. I expect students to deduce these bond types in these functional groups based on application of what knowledge they acquired in the model set labs.

Q: The brownie recipe calls for using an oil, not a fat. The front label states that the product is an oil. But the Nutrition Facts label on the back does not list oils but rather it lists fats. See figure 2 below. Hmmm...what's going on here? Does this mean that the words oil and fat are the same and consequently can be used interchangeably- YES or NO? Support your conclusion with factual evidence. Q: The energy density (ED) of carbohydrates is approximately 16.7kJ/g. Based on the information in figure 2 above, which statement(s) below, if any, is (are) true? Note: Numerical constants are approximate. Show calculations to support your choice- if applicable- for (1)-(3).

Author commentary: This question involves students 1) figuring out which information to use from the label, and 2) correctly converting between energy units as well as recognizing that 1 Cal = 103cal = 1kcal. I expect students to know 1 cal = 4.18J.

Q: Suppose you had no vegetable oil in the kitchen. But you have plenty of unopened/unused engine oil in the garage. How about this then- Why not cook with engine oil? It's a liquid like vegetable, olive, canola, and other plant-based oils, it's called an oil (and not a fat), and withstands high temperatures just like plant oils, right? Offer fact-based commentary about the structural similarities/differences between vegetable and engine oils. 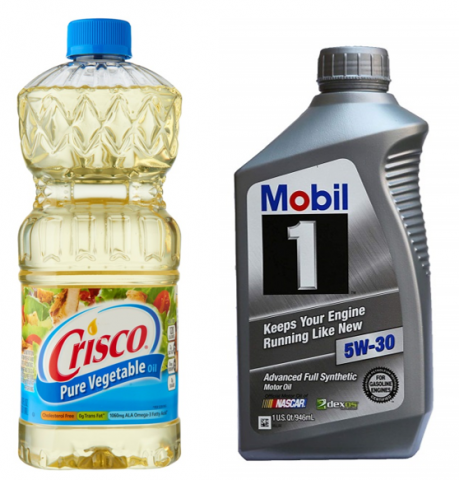 Q: Observations and measurements indicate that both metal pans below are 8in square and have the same depth. Also, both are made from the same metal or metal alloy. When each is held in the hand the pan on the left is sturdier (doesn't bend as easily or at all) and weighs more than the pan on the right. You've probably held both types in your hands and noticed the sturdy/flimsy and weight differences. But brownies can be baked in both pans. The brownie instructions do not stipulate which pan type to use. But then again maybe it doesn't matter. Or perhaps it does matter. Matter for what? The time required to bake the brownies. Hmmm…kind of Shakespearean- to matter or not to matter?

Below are the possible outcomes for use of the two pans (left = A, right = B) with respect to time needed to bake the brownies at Toven = 325OF. Which choice is it? Additionally, you chose 1, 2, or 3 below for a reason or reasons. Using proper chemistry terminology explain your reason(s) for choice of 1, 2, or 3. TTBB = Time To Bake Brownies

Q: Based on the description of the two pans, which choice is true, if any? Explain the reason(s) for your choice. d = density

Closing comments: The above questions are just a small sample size of chemistry application-related questions that can be developed from the information found on the backside of a popular dry brownie mix box. Other Q types involving stoichiometry (namely, limiting reagents), gas laws, phase diagrams, thermochemistry, physical properties, and molecular structure have been developed thus far. Those above are more conceptual in scope and challenge students to defend their conclusion(s) even for the multiple choice type Qs. Hope you find this useful. Enjoy...