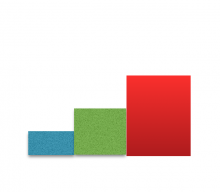 In this post I would like us to consider the ways teachers can help support and scaffold the process of making claims and drawing conclusions on the basis of evidence.  Not only is this grounded in the scientific practices addressed in the Next Generation Science Standards (a centralized theme of the practices, but especially found in scientific practices 4 and 6), but it is also at the very heart of what scientists do.

Before I dive into some of my recommendations for scaffolding students through the process of making claims from evidence, I want us to consider our own views on science teaching and learning.

I’m asking this question, because I would argue that this is the central question we need to consider before we try to transform our classrooms into inquiry learning environments.  I believe that an inquiry-based classroom is really not any different from the process of doing science.  When students are presented with a question that addresses a natural phenomenon and then asked to collect and interpret evidence to support a claim in response to the question, we have begun to set up an inquiry-based learning environment.

In inquiry contexts that rely on student-generated evidence and structured discourse, students have demonstrated positive conceptual learning gains and views about how science knowledge is constructed [1, 2].   Specifically, hands on manipulation and learning without direct instruction have been shown to result in greater student conceptual understanding than did readings, lectures, and worksheets [1].

Sure, we can all probably make the argument that there are times when it is appropriate to sit with a student and tell him or her about a particular science concept, or perhaps even to tell the entire class about a concept.  The question, however, is whether this style of direct instruction represents our classes on a regular basis, or is a tool that is sparingly used (and not used at the expense of students generating their own claims about phenomena).  I challenge you to consider the culture and learning philosophy established in your science classrooms.  Who generates the claims?  Are laboratory data and observations applied to claims and concepts that students have already been “taught” or are students using the data and observations to make and support the claims?

In traditional science courses, students are told about science concepts in a lecture-format and then they confirm these ideas in the laboratory setting.  In order to set up an environment where students generate claims from evidence, this learning cycle needs to be reversed. First, a lesson is framed with a very specific content objective and a guiding question.  Students then consider their own initial thinking about the concept and share their ideas with the class.  This often generates dissent among students, which can serve to motivate data collection in order to establish a claim that is supported by experimental evidence.  Students then collect evidence in either a guided manner or an open manner (depending upon the level of students, degree of scaffolding needed, and the extent of student background knowledge).  Students work through the experimentation with the goal of generating a claim that is supported by their evidence.  Once, these claims are established, students can engage in scientific argumentation with peers in order to ultimately arrive at consensus and establish the scientific principles associated with the content objective.

In my science classes, the experimentation is much more guided than in an open-inquiry classroom.  This is because I am often working with students who do not have confidence in science or extensive scientific background knowledge.  My goal is to gradually shift toward less guided experiments so that I can eventually pose a question and suggest experimental materials and then have students design their own ways of collecting evidence.  The reality, however, is that this may not happen until the end of the school year.  Regardless, the goal in my class is still the same: for students to use evidence to generate claims.

(Side note: I am currently only teaching physics, so my example below is from the physics classroom.  The same teaching philosophy, however, can certainly be applied in chemistry.)

In a recent lab about the relationships between force, mass, and acceleration (Newton’s Second Law), students were posed with the following question:

Students then engaged in a series of lab steps and questions asking them to manipulate the strength of the force acting on a low-friction cart (using fans mounted to the top of the carts) and then to manipulate the mass of each cart.  Students made observations of the carts’ accelerations using velocity-time graphs.  Students were then guided through the process of making a claim from their observations.  The following are examples of the different types of questions and prompts that are specifically designed for students to ultimately extract the scientific principle about the relationship between mass and acceleration:

(Question to extract the scientific principle) What is the relationship between mass and acceleration?  Make a claim that is supported with experimental evidence.

(Question to reflect on how student thinking has changed)  How does your evidence-based claim compare to your prediction?  If you changed your thinking, describe how experimental evidence played a role.

These questions and prompts intentionally begin as very direct questions that address the specific laboratory scenario.  The questions then ask students to step back and craft a more generalized claim.  Finally, students are asked to think about their own thinking and how evidence helped craft their own understanding of the scientific concepts. 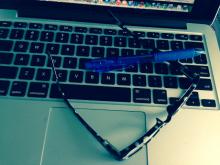 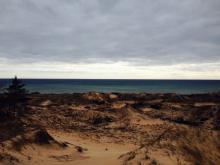