Here is the context.

As I have said in the past (see the link here), microscale chemistry is starting to play a major role in my classroom.

We are currently studying quantum numbers, specifically, Pauli Exclusion Principle, Hund’s Rule and Aufbau diagrams. Students have been able to provide the electron configuration and orbital notation for different elements. At the end of the day, we have not looked at experimental evidence. Is it really different from the Bohr model and can we show that in a high school classroom? 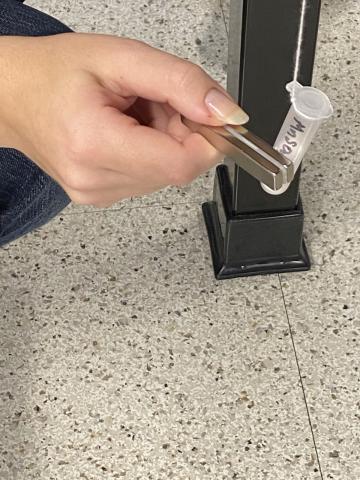 Figure 1: Holding a rare earth magnet next to a test tube of manganese(II) sulfate

The answer is “yes” through a simple experiment. Many people have looked at this. I got the following idea from Bob Worley (see his website and his Youtube channel). Students worked on the orbital notation for manganese(II) sulfate and zinc oxide. First, I mentioned that the +2 charge comes from removing electrons from the S sublevel for stability reasons. Next, we looked at how the manganese should be half filled D with five unpaired electrons if it follows Hund’s rule. The zinc should have a filled D with no unpaired electrons. These two are also examples of paramagnetic materials (compounds with unpaired electrons that attract to a rare earth magnet) and diamagnetic materials (paired electrons that weakly repel from a rare earth magnet).  Students came in and got the data in about 2 minutes in their groups. 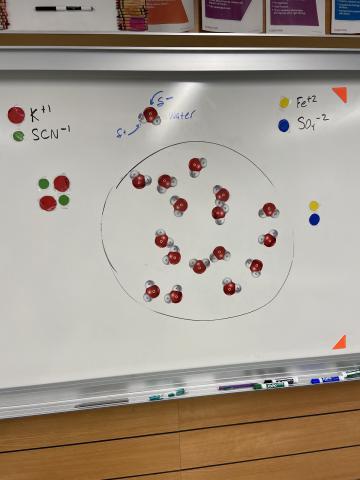 Students made the connection between the experimental evidence and the quantum numbers demonstrating paired and unpaired electrons. Next, it was time to predict. What happens if I were to take iron(II) sulfate and react it with potassium thiocyanate in a small “puddle”? Would the magnet have an effect on the iron? 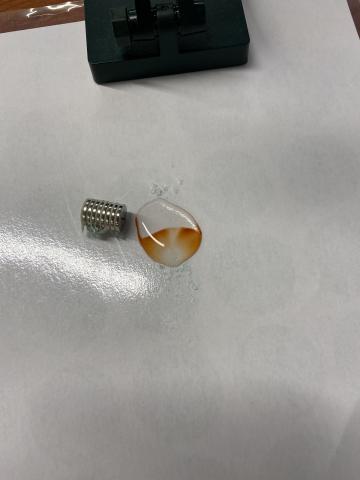 Figure 3: Iron(II) sulfate reacts with potassium thiocyanate. Does the iron react to the magnet?

Finally, we had time for one more experiment suggested by Bob. I bubbled some oxygen in some children’s bubble solution on a petri dish. We discussed how oxygen has some unpaired electrons. Sure enough, the rare earth magnet was able to nudge the oxygen bubble across the dish.

In the end, this was quick, fast, easy and provided a rich discussion for future experiments. Definitely an experiment that I will come back to. Stay tuned for more microscale.

Thanks for confirming that chemistry works the same in States as in the UK. It is best to use iron(III) nitrate  to see the red slash distorted  by the magnet. See https://youtu.be/jo4Kz8-FqVo  and https://youtu.be/mS1o9Dn7nRM . You can even see the distortion in the intermediate. https://youtu.be/WTtpckXsPZs between iron(III) salts and the thiosulfate ion. Hydrated iron(II) sulfate should be green. A freshly made solution should give no colour with thiocyanate but solution air oxidised and the red iron(III) thiocyanate begins to form. I once did the red slash demo iron iron (II) nitrate at a University lecture theatre and it was projected onto a huge screen from the visualiser. It brought a audible  gasp from the audience and I knew that microscale had its wow moments. I hope it would have pleased Hubert Aleya watching from above. The great man not only did the big stuff but also pioneered projected demonstrations which featured in J Chem Ed in the 80s.

Bob - As always, thanks for the input.  We do truly stand on the shoulders of giants. I am grateful for the ideas in microscale during a time when they are now extremely useful.  My next adventure will be with another ideas I stole from you.  It is two graphite electrodes with a drop of water and a little sodium sulfate.  We are starting bonding and I am hoping the students see the bubbles and start asking questions.  I am going to use it as a mini hoffman apparatus and then later on with copper (II) chloride.  Thanks again for your ideas and comments.  Keep them coming!

Great visuals.  It is amazing how magnetism affects chemistry.

My retired collegue, Wayne H. Pearson, published a J. Chem. Educ. article (https://pubs.acs.org/doi/10.1021/ed300545y) on using an analytical balance and cheap, strong magnets to show paramagnetism and diamagnetism.  He built a low cost, no waste lab which incorporates a lot of electron configuration practice which we still use every year.  Before we started using this, every year on the midterm exam students got 40-50% on a multiple choice question about diamagnetism vs. paramagnetism.  One we used Wayne's lab, the same question went to 88-95% correct.  I have seen nothing like it for taking a misapplied concept and correcting it.

Thanks for sharing! I appreciate the article.  It is great to have multiple methods of getting to the same place.  I feel like we are not exactly out of the woods yet with the issue of the pandemic and post pandemic.  The more tools in the tool bag hopefully will make the journey a little better and easier for everyone.  Thanks again!