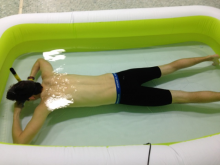 I’d like to report on one of the end-of-year research projects that two of my general chemistry students completed during class this year. If you’d like read more about these end-of year research projects in general, click here. Be warned: the following description of this project is lengthy, but I think it’s worth the read if you are interested in inquiry learning or how to relate chemistry to biology, nutrition, or health and exercise science. If you'd like to read or discuss more about inquiry learning, click here.

Two heath and exercise science majors (and collegiate runners), Krista Broekema and Ian Miller, decided to try to use simple principles learned about in general chemistry to measure the metabolic rate of the human body.

The basic idea was to measure the metabolic rate by submerging part of the body (Krista’s foot) in a known mass of water for a particular amount of time. By doing so, the enthalpy change in the water could be measured by:

Finally, dividing the energy lost by her body by the time her foot was submerged and converting to appropriate units (3600 s = 1 hour and 1000 calories = 1 metabolic Calorie), her metabolic rate could be estimated:

To begin with, Krista and Ian found a Styrofoam cooler. They poured 8 liters (8000 grams) of water (which had been allowed to sit at room temperature for at least 24 h) into the cooler. Into the top of the cooler, a hole was cut through which Krista could place her foot in the water. They tried to insulate her foot and the water as much as possible. A thermistor was connected to data acquisition equipment to measure temperature vs. time in the water. After making sure the temperature was stable, Krista inserted her foot into the water (Figure 1).

Figure 1: Krista with her foot in water in a Styrofoam cooler

Figure 2: Temperature change in 8 L of water as a result of a Krista’s foot being inserted in the water.

Next, it was calculated that if the energy given off by Krista’s foot was scaled up to reflect the energy given off by her entire body, her body would have given off a total of 248,000 calories (Equation 3). Because 1000 calories = 1 nutritional Calorie, this corresponds to 248 Calories in 1790s, or almost 500 Calories per hour (Equation 4). This is about ten times the amount we expected to measure (a 125 pound female should expect to burn about 50 – 60 Calories per hour while sitting).

When we saw these results, we began to wonder what went wrong. We knew we had insulated everything quite well, because the water showed no temperature change over 30 minutes time when Krista’s foot was not inserted into it (data not shown). We began to think about the biology of the problem. We knew Krista’s foot was submerged into water at 20oC, but her body needed to maintain her foot at 37oC. We guessed it was likely that her body needed to send a lot of energy to her foot to maintain homeostasis. Therefore, scaling up the energy given off by her foot to reflect the amount given off by her entire body might not be appropriate. After searching some sites online, we learned that the body can lose energy 25 times more quickly in cold water than in cold air. Given this information, we calculated that the loss of 500 Calories per hour in cold water would correspond to 20 Calories per hour in cold air.

We weren’t satisfied with these results. Ian agreed to submerge his entire body in a known mass of water for a half an hour, measure the temperature change in the water, and apply the same analysis to measure his metabolic rate. I told the two to go to use the whirlpool in the athletic training room, but Ian and Krista had a better idea: they purchased a small, inflatable pool. They took the inflatable pool to our university’s swimming pool, and placed it on the pool deck. Using 5 gallon pails that had been marked to measure to the nearest liter, they transferred 574 L of pool water from the university pool into the inflatable pool. After determining that the air temperature and the water temperature differed by less than 0.5oC, they placed the thermistor connected to data acquisition equipment) in the kiddie pool. Ian (using a snorkel to breathe) got in the inflatable pool and remained submerged for over a half an hour (Figure 3).

The temperature of the pool water steadily increased over the first 1000 s, but then decreased thereafter (Figure 4). The decrease observed in temperature was a bit of a surprise to us; nevertheless, we decided to calculate Ian’s metabolic rate based on the temperature rise observed over the first 1000 s. Using Equation 1, we calculated that the enthalpy change in the water was +34,440 calories (we estimated that the temperature rose 0.06oC over the first 1000s). This means that Ian’s body gave off 34.4 Calories in 1000s or 124 Calories per hour during the first 1000s of the experiment. We figured this result was plausible, considering that Ian’s body was likely producing quite a bit of energy to keep his body temperature at 37oC when the surrounding water was only 29oC. Interestingly, Ian reported that his body started to shiver during the experiment.