Late autumn is soon to give way to the thermal rigors of winter and your local black (or grizzly) bear is about to take a long slumber after spending the past six months frantically- but with evolutionary precision and purpose- binge-eating whatever food was available. The purpose for such behavior? To pack on the pounds and become as excessively chunky as possible as a bear with a high percentage of fat relative to body mass is a healthy bear, a warmer bear during winter's chill, and more likely to survive the caloric deprivation of 160+ consecutive days as during hibernation bears do not eat (nor do they drink, urinate, or defecate).

Millions of years of evolution has endowed brown (Ursus arctos; grizzlies are a sub-species of brown bear) and black (Ursus americanus) bears with the enviable metabolic capacity to starve themselves for a long period of time and still survive (unharmed but of course very hungry). Rarely does a bear die from starvation while hibernating. It is only fitting that a large, exquisitively muscled, and intelligent mammal that voluntarily starves itself, turns down its body’s thermostat, remains healthy during the time it has not eaten, drank, or rid itself of solid or liquid waste products, and shows no recognizable muscle atrophy, bone degeneration, or dehydration while starving deserves respect and should be viewed with awe (Nelson 1987, Hellgren 1998, Toien et al. 2011, Stenvinkel et al. 2012). The next few months I'll be writing about how North America's brown and black bears are metabolic and biochemical marvels. Truly, they are chemist extraordinaires and their hibernation chemistry overall is arguably without equal in the mammalian world. Let's learn some really cool chemistry from them.

Introductory Remarks: First, I am a bear enthusiast. They along with the Amur (Siberian) tiger and wolves are my all-time favorite land-based non-human animal. Second, I am on a one-semester academic sabbatical and during this time to exercise different intellectual 'muscles' I chose to learn more about the chemical superlatives of bears. And consequently I have developed some classroom assignments about bear chemistry that I will share in the near future. Third, the adaptive physiological survival strategies practiced by non-human animals are a marvelous starting point to relate foundational chemistry ideas taught in class and lab to the natural, biological world. Students are far more interested in biology than chemistry so why not take advantage of this reality and teach chemistry via the chemical biology of animals. Fourth, teaching chemistry using examples of animal survival adaptations or other approaches (see next paragraph) offers up a treasure trove of creative learning possibilities for students and a treasure trove of creative teaching possibilities for faculty.

The Rescue Rhino Project. How can chemistry be used to help save the rhino from extinction? Devalue the horn. How? Folks from the Rescue Rhino Project inject an antiparasitic drug and dye into the horn of a captured rhino. The injection is painless to the rhino and the chemicals harmless to the rhino's health. Over time the injected chemicals disfigure the horn, thereby rendering it without value to blackmarket profiteers. Also, rhino horns are ground up into fine powders and used as medical curatives. But the injected chemicals in the horn can cause nausea, vomiting and convulsions in people. Why use something that will make you sick? The (hoped for) result- reduced poaching of rhinos for their horns.

A Brief Introduction to the Metabolic Marvel of Bear Hibernation: So what happens to a bear's body between the time it eats its last meal just before entering the den to when the bear exits the den, a period lasting from 100 to 160+ consecutive days (depending on where the bear lives)? The infographic (created by author, SJD) below summarizes some of the impressive and radical metabolic and physiological adjustments and stresses that happen when bears hibernate. 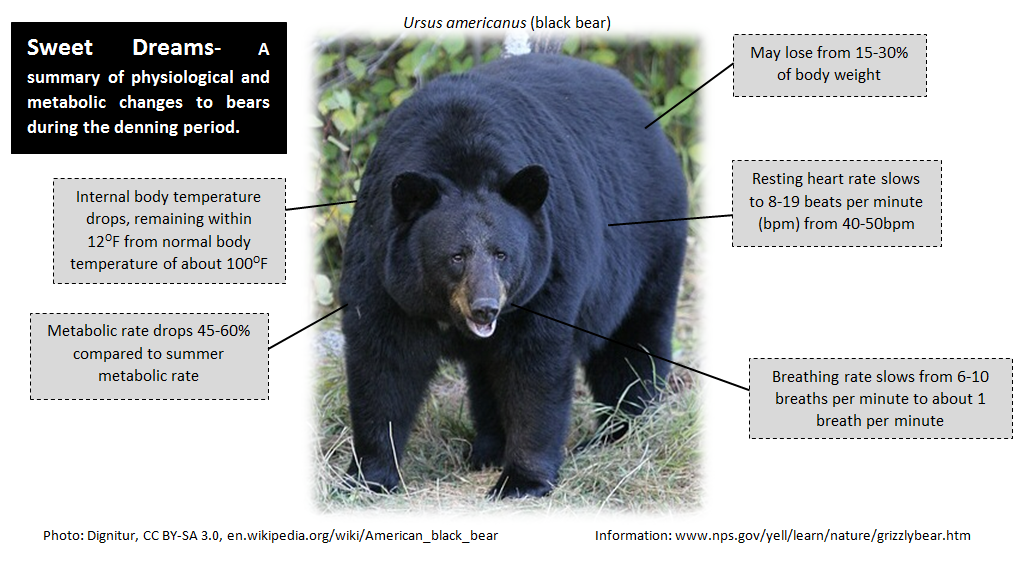 The graphic above does not include the physiological and metabolic stresses imparted to pregnant female bears due to gestation, birth, and lactation; bears give birth to 2 or 3 cubs in late January/early February. Keep in mind this is about 65 to 80 days (or longer) after mother bear has eaten her last meal just prior to the commencement of the denning period. Bears basically give birth to multiple cubs while in starvation mode. Once born, bear cubs do not leave the den and remain dependent on their mother's fat- and protein-rich milk (18% and 6% on average; human milk is 4% fat and <1% protein). Mother bear must continue to care for her cubs and generate milk for the next 45-60 days without eating. That is some truly fantastic chemistry going on.

Each of the bullets above involves a litany of other topics involving redox chemistry, energetics and thermodynamics, enzyme chemistry, stereochemistry of chiral molecules, reaction specificity as related to product formation, molecular structure, and the list goes on. But what good is all this knowledge if it can't be applied? To that end I'll also share questions that I've created that ask students to apply the chemistry to understand the biology. 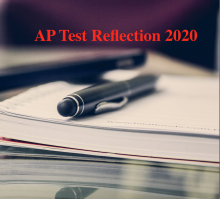