LED lights and the Periodic Table 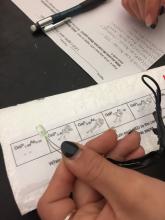 This summer at BCCE 16 George Lisensky and Emma Koenig from Beloit College presented a workshop on how to use LED lights to demonstrate periodic properties. They designed a lab for college students and presented the ideas and theories to teachers (these are the slides they presented).

I must admit, I have a love affair with all things periodic table and I had never seen this idea. I was excited to try to develop a version of what they did for high school students.

Here is the idea behind the lab. First, students need to understand how LED lights work. Essentially, every LED light has a "band gap". Electrons are pushed into an empty orbital which is negative and then the positive end of the circuit attracts the electrons. As they go down in energy through the band gap, they emit light. The larger the band gap, the more energy, the smaller the wavelength and the closer to the "blue" end of the spectrum. So, the key is to try to control the band gap and thus control the color of light. As it turns out, the carbon family is the perfect group of elements to use because of the crystal lattice structure. There is only one problem...the band gaps are either too large or small and emit light that cannot be seen. Scientists decided then to make "solid solutions" of elements on either the right (boron family) or left (nitrogen family) of the carbon family. These solid solutions were developed so that on average, elements have four valence electrons similar to the carbon family.

So....as an example, here is the composition of two LED lights. One light is a solid solution that is composed of GaP1.00As0.00 and the other one is composed of GaP0.40As0.60. The way these are interpreted is that there is Gallium which is in the Boron family and there is a mix of Phosphorus and Arsenic from the Nitrogen family. There is one part Gallium and one part Phosporous in even amounts in the first LED light with no Arsenic. In the second LED light there is a "solid solution" made up of 1 part Gallium, .4 parts Phosphorus and .6 parts Arsenic. The key is that the ratio of the Boron and Nitrogen family constituents are 1 to 1 but within that ratio, there may be different amounts of elements in the same family such as .4 parts Phosphorus and .6 parts Arsenic as compared to 1 part Phosphorus and 0 parts Arsenic.

Here is where the periodic table comes into play....in general, the greater the ionization energy and the greater the electronegativity, the larger the band gap and the higher energy photons. Students can examine the two lights mentioned. In general a solid solution that has more gallium and more phosphorus and no arsenic has more atoms with a higher electronegativity and ionization energy than a solid solution with the same amount of gallium but .4 parts Phosphorus and .6 parts Arsenic. Therefore, the first LED light would have a larger band gap and light closer to the blue end of the spectrum. In fact, this LED light is green. The second light composed of elements that overall have a lower ionization energy and electronegativity compared to the first have a smaller band gap with less energy and photons closer to the red end of the spectrum. This light is red.

At the high school level we first had to cover trends in the periodic table. Next, I assigned students to create a one page "infographic" that answered two questions. How do LED lights work and why do they have different colors? Finally I provided them with six LED lights in which they were given the compositions and had to predict the wavelengths from "shortest" to "longest". They first had to develop a theory and then test only two of the lights. They then had the chance to keep their theory or change it based on the test and then they could test all six lights.

For a first time activity, it went well but there were a few rough spots. Some students just googled the compositions to try to predict the colors. I told them that the prediction was only a small portion of the problem. They had to come up with the "why" and explain it to me. The best part of the activity was when two of my smartest students tested the first two lights and their predictions were proven wrong. We talked through it and they came to the conclusion that they confused the band gap idea. They thought that a smaller band gap would produce light on the blue end of the spectrum. Once they re-examined their results they figured out the problem and corrected it...with little guidance from me.

Overall, this was a good activity on several levels. It did take some time to order the LED lights and set up the power sources. It is my hope to have the finished activity posted in this site in the activity section in the future. Do you have a novel and unique lab or activity that your kids get excited about? Why not share? I look forward to hearing from you.

I would like to thank Dr. George Lisensky and his student, Emma Koenig, of Beloit College, Beloit, WI for their 2016 BCCE presentation. I received permission from Dr. Lisensky by e-mail to use the materials from their presentation.