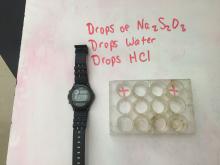 I am facing what many teachers are facing. It is AP week, I am trying to continue "as usual" with doing labs and learning but this time of year is anything but "as usual". There is a rates lab we do this time of year which is a good lab, rather involved with a significant amount of set up and work. I got an idea for a slightly different rates lab from Bob Worley. I found a similar large scale version from Flinn Scientific. Thanks to Bob, I decided to do a microscale version.

Here is the lab. Students take a solution of sodium thiosulfate and add a few drops of hydrochloric acid. The reaction ends with sulfur forming and making the solution cloudy. There is a suggested series of reactions that occur before the sulfur forms. There are some concerns with doing this on a large scale. First, there is a good chance of getting sulfur dioxide which smells bad and can form sulfuric acid. Second, it is hard to know exactly when the reaction ends.

If they had trouble seeing how each reaction ended and the times, they could go back as many times as they needed and watch the video. Overall, the data was not bad. I would probably try this again next year with a few tweeks. I wanted it to be more inquiry but we just did not have the time to fully investigate or have students develop their own experiments, but you could do it and on a microscale it is O.K. if mistakes are made. Also, because of the small scale, the sulfur dioxide was not a problem. Give it a try...let me know what you think....

I did this because I wanted my students to have more experience with method of initial rates, and this helped a lot, even though all their tests were at room temperature. I like your extensions with heating, etc.... good idea to use cell phones to video it- I'll do that next time.