Many of you who know my work are aware that I have many different, let’s call them" eccentric", approaches to my teaching. One of them that I want to start talking about here on ChemEd X is Chemistry (and occasionally physics) on Postage Stamps. My background is in chemical education and chemical physics so I have some wide ranging interests in the world of what we can call Chemical Philately.

Maybe a little background is in order to help you understand where I am coming from. I did not start out as a stamp collector when I was a child. I got interested in stamp collecting after hearing a talk about Chemistry and Physics on Stamps by the late Marvin Lang of the University of Wisconsin at Stevens Point. I was immediately struck by how much subject matter was portrayed on stamps and thought that it was a good way to reach out to my students who were telling me that they never saw chemistry anywhere except in the classroom. So I started reading some Journal of Chemical Education articles, joined a study group, sent out some letters to other collectors, and bought my first stamp album. Now almost 30 years later I am the President of the Chemistry and Physics on Stamps Study Unit and have given talks on Chemical Philately across the United States and overseas.

I have been able to incorporate postage stamps into my classroom during many of the chapters taught throughout the year. I can’t tell you that I have them to support every single unit taught but I have used them in many. I try hard to have a wide assortment of stamps in a showcase outside my classroom on the first day of school every year. They will catch the attention of many students passing by, if for no other reason, to see what the weird old chemistry teacher is doing this time.

I have written some scavenger hunts to go along with my stamp displays in the past. I have also given a talk where I show 50 or so stamps and ask questions about each of them and see what the students can come up with after a few days of research time. I will admit this was a better assignment in the pre-internet days. It really got them to go up to the other science teachers and start asking them questions also.

Stamp collecting offers us more than just stamps themselves. Almost all stamps will have accompanying “First Day Covers” or cachets. A First Day Cover (FDC) is an envelope prepared specifically for the stamp issue and cancelled with the date of the first day it was available. These are prepared by both individual collectors and some professional companies. An individual has 30 days from the first day of issue to send in their covers to be postmarked at a specific post office where the stamp was first issued. Cachets are special envelopes that typically feature artwork related to the stamp or a special event. Some of the older readers may remember the controversy when a stack of envelopes was flown on Apollo 15 without NASA’s knowledge. Sometimes special postmarks are prepared for events and anniversaries that feature chemical structure and similar material. I hope to feature several different types of material in some future posts.

So I am intending that this will be the first of several “Stamp of the Week/Month/Year/Decade” style posts where I can share with you what I think are some of the best issues featuring chemistry (and some physics) from the world of Chemical Philately. I thought we might start by focusing on a few United States issues that you may have seen and a few foreign issues that I think are really great ones for use in a classroom. 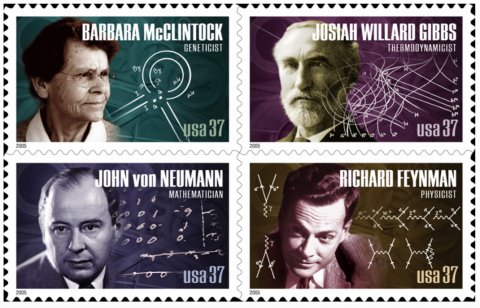 The United States is not a world leader in science stamps. In recent years we did have a short run series of “American Scientists”. I was one of the people who helped to prepare the proposal that was sent to the USPS about starting the series. I had the great pleasure of working with Ralph Leighton who was the co-author of the amazing Richard Feynman biography “Surely your Joking Mr. Feynman”. He was very interested in getting a Feynman stamp and was able to harness some other big names to help in our quest. In 2004 the USPS issued the first sheet that featured Richard Feynman, Josiah Willard Gibbs, John von Neuman, and Barbara McClintock (Image 1).

The Feynman issue has a set of Feynman Diagrams on it and the Gibbs issue shows a thermodynamic surface most likely an energy, entropy, volume relationship from James Clerk Maxwell’s book “Theory of Heat” published in 1874. The idea for this came from a professor (Kenneth Jolls) at the University of Iowa who has spent a great deal of time generating computer images of surfaces that previously were only visualized by making wood or plaster casts. These are some great stamps for your classroom discussions.

Image 2: Cover prepared for a ceremony at Caltech to commemorate the issue

I have several items related to these stamps. One is a cover prepared for a ceremony at Caltech to commemorate the issue. It also happened to be on the weekend of the 40th class reunion for the group of students who sat through Feynman’s famous freshman physics lectures that became the “Feynman Lectures on Physics” (Image 2).

One of the international issues that I use regularly in my classroom is a Swedish set from their series honoring Nobel Prize winners (Image 3). It contains 5 stamps that are all related to Quantum Mechanics. They feature Niels Bohr, Werner Heisenberg, Louis de Broglie, Erwin Schrodinger, and Paul Dirac. I am very fond of the detail that has gone into this issue. The stamp featuring Bohr has classic Bohr obits portrayed on the stamp. In my classroom we often refer to this as the “Best wrong idea ever”. The image of electron orbitals on the Schrodinger stamp prove very useful in lectures and occasionally test questions. The de Broglie issue has very nice representation of a wave that goes along with his “All matter is wavelike” theory. The Dirac Heisenberg stamps while great to look at are a little less useful than the others.

See Michael's Stamp of the Week #2!

Cover prepared for a ceremony at Caltech to commemorate the issue 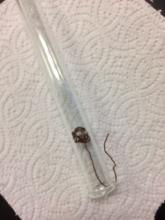 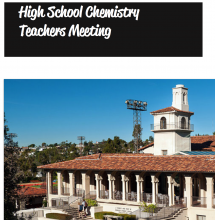