Organic chemistry is not often found in a first year chemistry course in high schools, but it has been a unit in the New York State Curriculum, and it will stay there until the New York State version of NGSS is fully adopted. When I speak to chemistry teachers from other states they often wonder why organic is taught in my course and why I actually love teaching it.

Its simple: my students love organic chemistry. It is a great application of all the bonding we have learned and why it is useful. The students love seeing the real world connections between the bonding information we have learned and the chemicals we use at home. But a major draw back for me is only having about two weeks to cover hydrocarbons, functional groups, and reactions with limited resources, equipment, chemicals, and class periods.

We start the organic unit off with an introduction to hydrocarbons, their uses and nomenclature. Most of this is done using flipped homework videos and POGIL styled teamwork assignments. When we move on to functional groups, my colleagues and I have resorted to mostly direct instruction and rote memorization of the functional groups that appear in our reference tables. The students are required to identify and name organic compounds with up to ten carbon atoms using the reference table (I attached the NYS table). I always try to make it more fun by bringing in facts and stories about examples of these organic functional groups. Since I don’t often lecture, my students find it refreshing to hear my stories about the chemicals and they enjoy learning about organic chemistry. Even at the end of the year, in a course evaluation, many students cite that organic chemistry was their favorite topic. But even with the positive reports, I still had reservations. I wanted a way for the students to find their own patterns between the chemicals containing functional groups. So I created this resource and tried it out recently for the first time.

The activity is meant for teams of 2-4 students who receive multiple randomized cut out cards* that include various physical and chemical properties and uses of each chemical (see figure 1). The students have to organize the chemicals into categories of their own choosing. They are instructed to pay less attention to the number of carbon atoms, and more attention to the additional element(s) that they see making these compounds more than hydrocarbons. They are also told to consider the properties of each compound, as well as the bonds. The students must circle the element(s) that would make these chemicals not hydrocarbons. If they finish that part earlier than other teams, the students are asked to think about how these chemicals will be named. For each category, students decide if they need one organic prefix (meth-, eth-) or two separate prefixes as a precursor to an actual naming lesson in the future. I created two versions of the activity. In the first version, the bonds that are the most important to look for are highlighted to help some students in the activity. The second version is for advanced students who do not need the bonds highlighted.

Figure 1: Cards of several of the compounds as organized by students

I tried it out with my students. As each team started to organize the compounds by properties and uses, some students pointed out that these mocked the compounds they have seen on a table in their reference tables folder (although the table had not yet been taught). Other teams that were struggling were given the “hint” that there is a table in their reference tables that could help them. All teams in all three of my sections found success with this matching activity and as we reviewed our answers (each team was asked to report out on a specific class of organic functional groups) I was still able to tell my stories about specific chemicals we have now interacted with. I found the activity to be more enjoyable and more student centered than previous lessons I have used for the topic. And, my students seemed to own the material more.

As a follow up to the matching activity, I gave each team of students a specific infographic from COMPOUND iNTEREST that had one or more of the functional groups in them (I have included links for two specific infographics below for reference but you can choose any topics on the site that you think will be most interesting to you and your students). The team had to identify the functional group(s) and try to come up with reasons it makes sense the functional group is found in that specific compound. The teams reported out their findings in order to educate other teams that did not see that particular infographic. It was a fun follow up activity that only took about 20 minutes for 7 teams. To top it off, I was randomly observed unannounced by my assistant principal on the day of this lesson. The assistant principal raved about how invested my students were in the activities and how much he actually understood the material himself even with a limited background in chemistry! 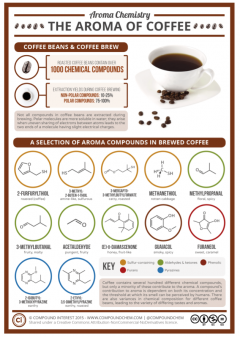 The Aroma of Coffee The Structures of Neurotransmitters

Note that COMPOUND iNTEREST welcomes teachers to download and print PDFs of infographics in their original form for educational use. See their Content Usage Guidelines for more information.

*Teacher tip: Consider laminating the activity sheets and the infographics and then cutting out the compound squares. They can be stored in a baggie or envelope for reuse.