Immobilization of Lactase Enzyme on Alginate Beads - A Quick Test

I came across an interesting Journal of Chemical Education1 article that explains how it is possible to crosslink sodium alginate, leading to the formation of calcium alginate beads. Sodium alginate is commonly used as a thickener in food such as ice cream and fruit-filled snacks.2 It’s a non-toxic and versatile material; not only is it used for food technology purposes but also in drug-delivery and wound dressing systems.

Calcium alginate beads are hydrogels which are a class of cross-linked polymers whose formation is represented in Figure 1: by cross-linking the polymer chains (long lines), we get a network (long lines connected by junctions) that is able to contain plenty of water molecules in its structure.

The crosslinking process can be achieved either by chemical or physical methods, depending on the interaction among the macromolecules of the final network. Chemical hydrogels feature strong interaction in the structure due to the formation of covalent bonds (permanent junctions), whereas in physical hydrogels macromolecules are connected by hydrogen bondings, ionic interactions etc (transient junctions). In any case, either of these types of junctions is able to make the hydrogel insoluble in an aqueous system.3 Biological fluids can be included in the structure as well.

A cool possibility that hydrogels offer, is the immobilization of enzymes in their structure; that is carried out by actually trapping the enzyme in the hydrogel network. In that case, the final result is a heterogeneous catalyst that can be easily separated from reaction mixtures by mechanical methods (such as filtration). Because the enzyme is a catalyst, it is found unchanged at the end of such a procedure. As a result, the hydrogel/enzyme system can be used for multiple runs. Therefore, immobilization of enzymes can be economically suitable for industrial applications; in addition, the immobilized enzymes are more stable than the free enzyme and has activity in several denaturing agents.4

I thought it would be cool to immobilize some lactase enzyme onto calcium alginate beads and investigate its ability to hydrolyze lactose. In the digestive system, lactose is normally broken down enzymatically into glucose and galactose (Figure 2) the latter of which can easily be detected by using glucose test strips. These monosaccharides are subsequently metabolized by the body. If lactase enzyme is not produced by the organism, lactose cannot be digested causing diarrhea and intestinal problems. It seems that lactose intolerance is a widespread problem all over the world (here in Italy, over 50% of the population suffers from lactose intolerance).

By using glucose test strips the concentration of the monosaccharide can be quickly estimated by looking at the color of the strip after its contact with the processed milk. 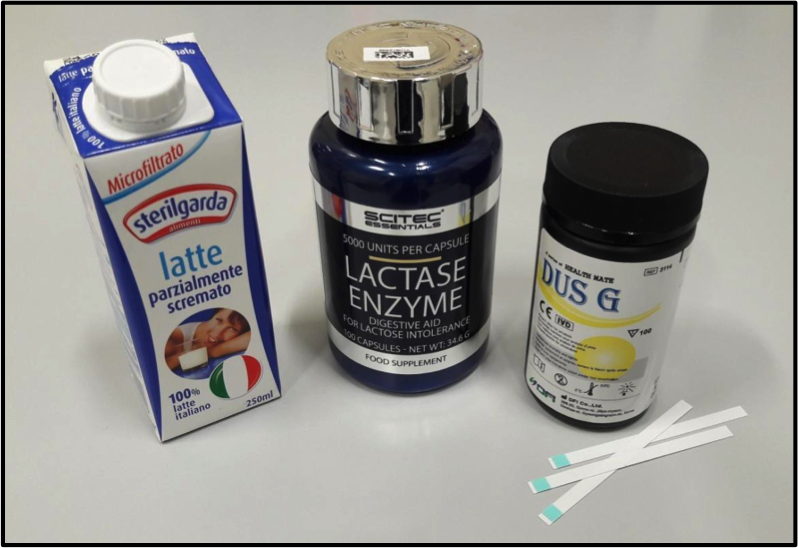 In this experiment, a physical cross-linking process was conducted. The procedure I followed doesn’t involve the use of any hazardous chemicals.

Calcium alginate beads were obtained following the procedure described in the JChemEd article I cited previously.1 In general, a 2% sodium alginate (2 grams of that slowly added and stirred into 100 ml of water) and a 1% calcium chloride (1 gram of that mixed into 100 ml of water) solution are adequate for conducting the experiment. I’ve been quite lucky to have these chemicals (from Sigma-Aldrich) already available in the lab but you can use any commercial version of them. They are often sold together since they are used in the field of “molecular gastronomy” in order to carry out a process known as Spherification.5 Lactase enzyme and glucose test strips were purchased online (see Figure 3). In some procedures, even an antacid such as Gaviscon® is suggested as a source of sodium alginate.6

Of course, you can use any kind of lactase enzyme supply (I ran a similar experiment in the past and I used a different brand with no qualitative differences in terms of glucose production). In Italy, all these substances, except for Gaviscon®, are not normally available in regular supermarkets; it is very easy to get them online though and I think they are easily found locally in the United States.

The preparation of the sodium alginate solution is a quite long procedure. To do that, I added 2 grams of sodium alginate powder into 100 ml of distilled water. At least 3 hours of vigorous mixing are required to get a proper solution that results in a dark-yellow kind of color. Once the solution was ready, I added the content of 4 pills (they correspond to 20000 enzyme units) of lactase enzyme to that. Since the pills contain other things along with the enzyme (fillers and excipients), the resulting mixture was quite cloudy. I do think that a commercial lactase enzyme solution would be even better (I would use Lactaid® Enzyme Drops or something like that) but I used the pills because of their minor cost. The mixture was vigorously stirred for 30 minutes; that was added drop by drop (by using either a pipette or a syringe) to a previously prepared calcium chloride solution (prepared by adding 1 gram of CaCl2 in 100 ml of distilled water). The contact between the two substances, immediately gave rise to calcium alginate-lactase beads (Figure 4, left). That procedure allowed to trap and immobilize the enzyme in the beads that became, as said before, a catalytic support the lactose contained in the milk can interact with. When the addition of sodium alginate was completed, I moved to the second step which involved a simple filtration and washing with distilled water of the obtained beads (Figure 4, right). That step was necessary to remove the calcium chloride, fillers/excipients contained in the pills as well as the enzyme that was not trapped in the beads.

Figure 4: From left to right: Calcium alginate beads before and after filtration/washing step

The beads were used to pack up a 60 ml syringe (a procedure which reminded me the packing of a chromatography column). See the final set-up in Figure 5.

The procedure I followed afterward was very easy: the milk was poured in the column from the top of that, keeping the clip closed. When all the beads were covered by the milk, I let the system sit for 90 seconds in order to make sure there was a good contact between the beads and the liquid. After that period of time, the milk was drained into a beaker by opening the white clip. The final glucose level was recorded by dipping the glucose test strips in the milk for 60 seconds; after that, the collected milk was poured again into the column and the procedure was repeated. I ran the process three times (see Figure 6 and Table 1 for results).

By looking at the color of the strips, we can say that the glucose levels eventually increased. The color of the Control strip, indicated that there was no glucose in the fresh milk. On the other hand, the colors of the First, Second and Third runs strips are different from the Control one. That means that hydrolyzation of lactose took place as the milk reacted with the beads in the syringe.

Table 1: Glucose concentration in the milk depending on the performed run

I’m quite sure that the final glucose levels can be increased by keeping the milk in contact with the beads for a longer period of time as well as stirring the mixture. Although I was curious to, I didn’t taste the processed milk but I thought it would taste sweeter because of the higher glucose levels (I don’t really suggest you taste the milk either!) Of course, this experiment is just a quick and qualitative evaluation of how lactase can be immobilized and used; in any case, I think it may be a good introduction to enzymes and how they can be used in an industrial kind of setting.

If you’re not interested in completing the immobilization described, just the formation of alginate beads is still a cool demonstration to do.7 Very nice results can be achieved by adding some drops of food dyes into the alginate solution. The reaction with the calcium chloride will give rise to colored beads and a stirring bar would create a nice “colored beads tornado”.7

As usual, I’m open to comments and suggestions about this experiment. I hope you will let me know how it goes if you try it out in your own chemistry lab!

I wish to thank the reviewers of this manuscript for their suggestions and advices. 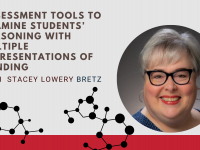