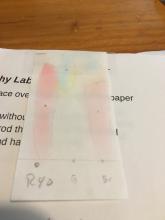 I have to admit that I was inspired by Tom Kuntzleman's blog entry about how we should stop trying to get kids interested in chemistry. I believe the spirit of what he was trying to say is that it is important to try to motivate students and a good way to do that is to meet them where they are at. Why not let them study those concepts that interest them the most? Many times I feel torn, as I am sure other teachers do. Yes, I want students to be able to pick concepts that interest them but I am also bound by the state to teach to a set of standards. Is there a way to meet in the middle?

I was approaching a unit in which students use physical properties of mixtures to separate out substances. There are many activities I could use that can teach to the standards. I was trying to decide which to pick but then I thought about what Tom said...why not let the students pick? Here is what I did. I had two lab options that deal with separation techniques. One lab is is designed for students to do a simple distillation of grape or cherry soda and they separate out the flavoring. The other lab used paper chromatography in an attempt to determine if red-40 food dye was present in a specific type of candy.  About two-thirds of the students did the distillation and the rest did the chromatography. It was up to them which lab to do. Next, I wanted each of the groups to understand the other process that they did not pick. One group from each topic was asked to present the lab or "teach" it to the other groups who did not do the lab.

Here is what I discovered as a teacher. First, it was a little crazy having two different labs going on at the same time in the same room but it was not impossible. Good pre labs with short videos can do much to prepare the students. Second, I think students for the most part genuinely appreciated the idea that a teacher would actually let them choose and that they got to examine drinks and foods that they use often. I also was pleasantly surprised by some of the presentations. Many students can explain ideas much better than I can. It was nice experience to witness as a teacher.

Overall, I think I would do it again. I cannot say that I have sufficient quantitative data to support that this is a superior method of teaching. I can say through qualitative data that it did support a culture in the classroom in which students who investigated items of interest showed a bit more enthusiasm. In other words, they looked like scientists who where kind of enjoying their job. I'll take that.

Do you have a lesson or activity that really reasonates with students? Would love to hear from you. Don't be afraid to post something......