Maritime shipping is the backbone of global commerce and trade. In 2020 a mind-boggling 1.9 billion metric tons (4,188,782,981,513 pounds) of cargo criss-crossed Earth's largest geographical features- the expansive, featureless oceans and seas (1). How is seawater chemistry involved in this vast and complex network of international trade? Let's find out.

This is the first post in a series that describes questions involving the application of some core chemistry topics to trans-oceanic shipping. I developed the questions to show students that what they learn in GChem 1 is connected to understanding the larger world and how it works. Application and theory are complementary. The chemistry topics covered in the questions found in this series of posts are common to any intro or GChem first-semester course and include:

The questions to be described also include a healthy dose of geography (figuring out location based on latitude/longitude coordinates) and physics (buoyancy), making for an interdisciplinary perspective. It is hard to talk about the oceans without knowing some geography. The two teaching approaches I employ the most in classroom activities such as will be described are Think-Pair-Share (known hereafter as TPS) and a modification of Just-in-Time-Teaching (known hereafter as mJiTT). But of course use whatever approach is best for you and your teaching situation if you decide to use this activity and those that are to come. Enjoy....

This post deals with Question 1 (= Q1) of the series. Other posts deal with other questions related to this overall topic- seawater chemistry and oceanic shipping. There are two versions to Q1. Same stuff but slightly different in presentation. First, Question 1, Version 1 (Q1V1).

How does Q1V1 work? Below is the outline how the classroom activity is organized. Presumed class size = 24 students.

Let's start with two pre-question observations that serve to familiarize students with the topic. This is an example of how I employ the mJiTT approach to a topic. I present enough (presumably) information about a topic to students and then ask students to apply the newly acquired knowledge to answering questions/solving problems. Some instructors call this 'Let's Practice'. Bottom line: Learn. Apply.

Observation 1: Located on the hull midway between a merchant ship's bow and stern (amidships) is found a symbol made up of a single vertical line and multiple horizontal lines connected to the vertical line. The horizontal lines extend either to the right or left of the vertical line and have equal or unequal spacing between them. This symbol is known as the International Load Line (ILL), aka Plimsoll line or marking. Two examples from actual merchant ships are shown below. The colors of the hull are not important. For this question letters to the right or left of each horizontal line have been removed from the images (I don't want to immediately give away the answers!). The missing (removed) letters are F, S, T, TF, and W and each letter indicates the water type the ship is sailing through. F = freshwater; S = summer temperate seawater; T = tropical seawater; TF = tropical freshwater; W = seawater winter.

The ILL is the legal limit to which a merchant ship may be loaded, depending on the water type which in turn depends on geographical location and time of year. The purposes of the ILL markings are to ensure that a ship has sufficient stability (= does not tilt or list right or left) and reserve buoyancy (volume of ship above the waterline).

Observation 2: Below are close-up photos of the water level in the neck of the same 250mL volumetric flask at two temperatures (oF). Temperature was measured with a thermocouple. The white threaded 'string' with blue diagonal stripes is the housing enveloping the thermocouple's wires. The setup was placed in the sun and left undisturbed. Temperature readings were taken at regular intervals. Only these two temperatures are shown. What can be concluded from these empirical observations? Have students submit their conclusion(s). 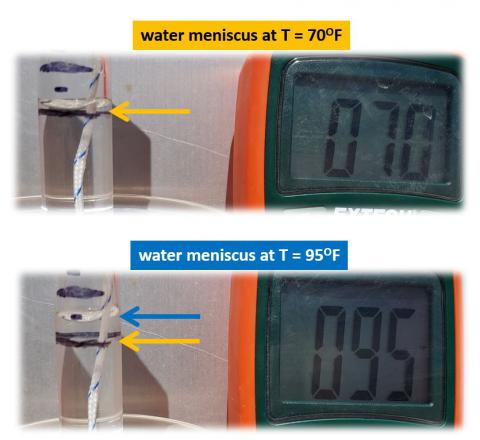 mJiTT is now completed so students are now prepped and ready to apply knowledge discussed in the two pre-question observations. Have students answer Q1 below individually.

Post Q1: Time is up and students have made their five predictions. Remember, do not show the answers yet. Each of 24 students has made five unduplicated predictions based on the same two observations (but perhaps different extent of prior knowledge...hmmm?). Lots of data in a really short period of time (est. 15min = mJiTT + answering Q1) have been generated. How to organize it all? At least to me collecting data is typically easy, especially in today's high tech world of computer interfaced probes, spectrophotometers, constant-volume titrators, and so on. But organizing data, especially lots of it and in a way that is understandable to someone who is not familiar with what you did? That can be a bear and a royal pain. And students need to have experience organizing data, any type of data not just mL, grams, and the like. Working individually or in groups (your call) allow students time (10-15 minutes) to figure out how to organize the 120 datum points (24 students x 5 unduplicated predictions/student) so eventually each student can compare their own data set (= predictions) to the aggregate data set (basically, what did each student predict relative to the rest of the class as a whole). Remember, students don't know yet if their predictions are correct or incorrect.

Below are two images. The topmost image is one way (amongst others) to organize the prediction data. How many students proposed this way to organize the data? Other ways?

The image below represents some hypothetical data (for illustration later on in this post). Maybe have copies of the blank table (above) printed out just in case students get stuck on how to go about organizing the data. Tally the individual data from each student to produce something like the hypothetical aggregate data set shown (rightmost table; hypothetical = made up data for illustrative purposes). 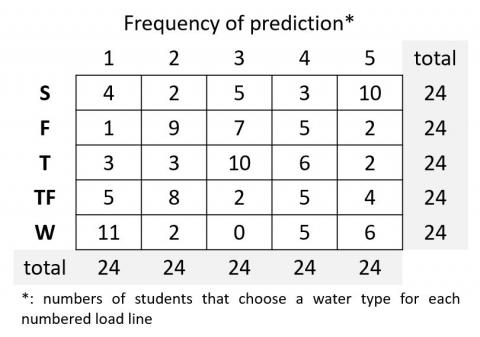 OK, the prediction data from 24 individual students have been aggregated. Each student knows what they predicted and now knows collectively from the aggregate data set what the remaining 23 students predicted as a whole. I like to emphasize to students over and over and over again and whenever I can that in spite of everybody looking at the same two observations and answering the same question with the same five choices, there is nevertheless a rather robust variance or range in 'answers'.

So what is next? Working individually or in groups (your call) allow students time (10 minutes) to look for patterns in the aggregate data and/or to summarize it as one finds in the Results section of a research paper. A good opportunity to practice technical writing. Then allow students or student groups to compare with another student or group what data patterns, if any, they found. Same or different pattern recognition? Again, everybody is looking at the same data, the same numbers generated from the same question and choices. What are the numbers saying, if anything? Are most students 'seeing' the same patterns? Is something goofy? Seem out of whack?

It is obvious from the hypothetical data (and likely the real data to be generated in your class) that not everybody is on the same page with their predictions. No surprise. Maybe now, once they have seen the aggregate data, students will want to re-evaluate their original predictions. I call this 'data pressure', which is akin to peer pressure. Basically, "Hmmm, my predictions are not 'in line' with the others so maybe they are right and I am wrong." Allow students to compare their predictions with other students. Do a quick poll- How many changed their minds after chatting with others? Held steadfast to their original predictions? I like doing this as I view it as important that students defend their conclusions or are open to changing their answer (perhaps for the worse).

This far into the activity and still students don't know yet if their predictions are correct or incorrect. They have had the chance to change their predictions (after looking at aggregate data and/or discussion) and maybe some did and others did not. Before introducing Observation 3 as an option (time permitting), perhaps is a good time to query students about their 'gut feeling' (= non-statistical) confidence level in their predictions up to this point in the activity. Maybe use the format below. 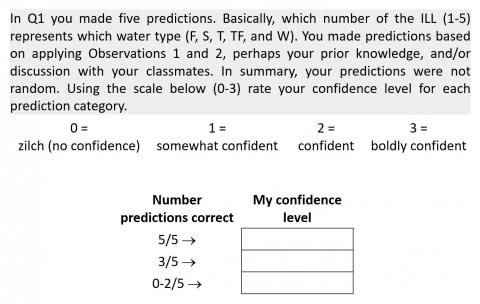 Why do this? As educators we task students with collecting data by carrying out hypothesis-testing experiments or non-hypothesis testing lab activities. How often are students asked to what extent do they have confidence (if even as a 'gut feeling') in the data they just collected? Confidence in data is a pillar of science. It is the springboard to supporting or refuting an idea. Of course, peer-reviewed data requires- as it should- the use of fancy statistical confidence level calculations and the like which is not feasible in this activity. But introducing students early and often to the concept that confidence in data (even if only thinking about it qualitatively) is a hallmark of authentic scientific inquiry is worth doing.

Almost but not quite time to reveal the answers. Let's give students one more chance to change, if they want, their predictions. This last chance comes in the form of empirical Observation 3, which is represented by the two photos below. Both glasses are identical, the liquid volume is the same (though this does not matter), and the water temperature in each glass is the same. The photo to the left shows an egg in water with a healthy amount of salt dissolved in it. (I basically poured salt into the water until the egg floated. Then I brought the volume up to level with tap water). And the photo to the right shows an egg in good ol' water taken from the faucet. Does this new piece of information convince students to change some of their previous predictions? Perhaps this evidence is what is needed for more students to match each of the five horizontal lines (1-5) with the correct ILL water type- F, S, T, TF, and W.

At the beginning I mentioned that there are two versions to this activity. The above is version 1. What is version 2? Version 2 involves showing all three observations to students at the beginning before they make their predictions. Same stuff just different where observation 3 is located. Or maybe there is another different way to order it that best works for you and your class. Go for it.

Now that the answers are known how do student predictions compare? For each horizontal line in the ILL a student either predicted the water type correctly or incorrectly. More data means more data to organize. And another chance to practice organizing data. Working individually or in groups (your call) allow students time (10 minutes or so) to figure out how to organize the correct and incorrect class results (120 datum points in total; 24 datum points/prediction category, 1-5) for each prediction. Below is a possible table organizational outcome that students may propose.

In closing, this is the first activity I developed to show how the chemical composition and temperature of water (sea or fresh) impacts trans-oceanic shipping. Basically, load capacity of a merchant ship depends in part on the type of water (composition and temperature) it is sailing through as the different water types translate into different ship buoyancy (and hence, stability). In the next post I'll discuss how a ship's master (captain, in modern usage) needs to have a working knowledge of salinity zones across the vast, featureless expanses of salty oceans to ensure the ship's stability remains uncompromised.

Note: For an interesting discussion of the terms ship's master versus captain see reference (2) below.