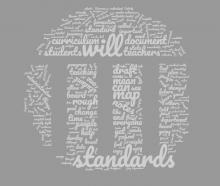 This is about some topics that can sometimes be viewed as nasty four letter words...but maybe they do not have to be. Let’s start with the first topic….curriculum maps. For years I have been involved in a number of schools that at one point or another have said, “Hey, we are going to pull you out of class and in some way, shape or form, have you communicate to us what you are teaching. This will be called a curriculum map.” These people were and still are generally good people who mean well. And from their side of the desk, I get it. An administrator, board member, parent, student or new teacher should have access to what is being taught. It makes complete sense. The hard part is coming up with some meaningful working document. It is kind of like jury duty.  You dread doing it but feel better when it is done. My experience has been pretty bad. Years ago I was told to develop a rough draft of a curriculum map for a course I was teaching. The rough draft would be handed to a secretary who would retype it, make corrections, allow for final approval and then provide it to the school board to be accepted or rejected. I made the rough draft and even included some hand written notes and "post-it" notes about things that I thought might need to be rephrased or changed a bit. I never heard of it again and it did get approved. Years later I saw the final copy. It was the exact same as the rough draft, including scribbled notes in the margin and "post-it" notes. Nobody read it...including the school board. It was thrown in a copier and passed along.

Next come standards. I live in a state that has standards that many people feel are poorly worded, confusing and are going to be changed soon anyway. You can imagine my enthusiasm when I was told our department had to develop a curriculum map on standards that I did not understand. However...a light appeared at the end of the tunnel…First, an administrator had the courage to say that this would be a living document that everyone knew would change somewhat over time. She wanted a document that everyone in the department could really use, see and have stock in. She gave us the time to work on it.

Second, she and others picked a program called “Masteryconnect”. This is a program that has an electronic copy of the map for all teachers to see. The entire map is tied to standards that are a version of state, federal and or local standards. Any formative assessment can easily be graded and tied to a standard. The data can be used to break down how the kids are doing in any one standard and plan future lessons accordingly. If we need to change to meet the needs of our students, we can and should immediately. It is not perfect but is trying to maximize data collection and analysis to help teachers and students.

The ultimate goal of "Masteryconnect" is to have a dynamic document that will allow us to formatively assess the students by the standards and help us to plan and change based on the needs of the students. Although it looks like “teaching by the standards”, grades will certainly not disappear. Instead, everyone will know what those grades mean. Students and teachers should have a good idea before the test how things will go based on the formative assessments. An “A” will mean the student has excelled at mastering the standards. It will not mean that the student had a “B” and brought in a box of tissues for extra credit to get an “A”.

Here is the real genius of this. As I walked around the room during our inservice I heard more talk than ever before from teachers debating about the strength or weakness of a particular standard, the depth of knowledge of questions in a lab or test or if certain standards might be more important than others and how much time should be spent on each. In the end we did not come up with the perfect curriculum map, timeline or set of standards...but we did embark on a worthwhile fruitful journey. Maybe that is the real goal. Perhaps it is this journey that is far more important than the end product and it is this one that will benefit our students the most. It will be exciting to see where the future takes us….