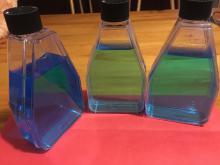 I was interested in having my students build their own colorimeters. I read through Tom Kuntzleman's Cell Phone Spectrometer blog post and watched his videos. It just so happens that we had someone donate a case of these really nice plastic containers that hold 275 mL of fluid, have screw on tops and two extremely flat, parallel and transparent surfaces. I had three of these with different concentrations of copper (II) nitrate solution in each one.  I quickly got on old shoe box and made a holder as Tom suggested and found a red piece of construction paper to place behind the container. The colorometer app took about 30 seconds to download. My first attempt at collecting data was unsuccessful because the box was blocking out too much light. I ditched the box. I just set up my cell phone next to each container. A red piece of construction paper was placed behind the container that was being examined. My son moved the containers as I held the cell phone and collected the "R" value data (red light passing through the blue solution) for each one. One minute later I had the data graphed with absorbtion vs concentration....and an R2 value of .99.  Slowly, a plan started to develop. I can tie in molarity and introduce Beer's Law, which they will study more in depth if they take AP chemistry. Another nice aspect of this is that I can save the standards that I use and either I or the students can make up the "unknowns" and have them determine the concentrations through Beer's Law.