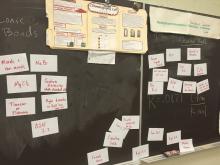 We just finished an introduction into ionic and covalent bonding. Somehow I wanted to try to figure out what they did or did not take away from the experience but because we just finished semester exams, I did not want to do another test or quiz. Instead, I tried a "card sort".

I took a stack of index cards. On each index card was written a term or phrase that could possibly be associated with covalent compounds, ionic compounds or both. A magnet was attached to the back of each card and the cards were placed at random on the board. The class was broken up into six groups. Each group had to send a person to the board. The student had to choose a card and place it in either the "Covalent" or "Ionic" column. I was going to allow students to create a column called "Both Ionic and Covalent" if they asked. A different student had to come up from the group each time.

Some interesting events took place. Students figured out quickly that they wanted to be the first to go. The cards that were left at the end were the concepts about covalent and ionic bonding that students were least confident about. Another important aspect is that it got students up and moving. It was a nice form of "assessment" without being a pen and paper test. The real "ah ha" moment came after the third class went through the process. Each class had the same handful of cards left close to the end of the sort. The cards all dealt with concepts that were about the properties of ionic and covalent compounds. That quickly informed me that the majority of the class honestly was not sure of the properties of ionic and covalent compounds and this quickly and easily helped guide my decision making about the type of lab to do next....properties of ionic and covalent compounds.

Card sorts can be quick, informative and easy to use. Just something a little different to keep student's minds thinking and their blood pumping.....