Building Atoms: One App at a Time 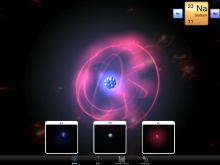 In my high school chemistry class, a unit we cover is that of atomic structure. In particular, given an elements symbol, mass number, atomic number, and charge, the objective would be for the student to determine the atoms number of protons, neutrons, and electrons. I was already familiar with programs such as Build an Atom by pHet and have used the game mode as an assessment with my students requiring them to obtain all twenty stars for credit.

Atom-Builder by Slate and Tablets, LLC. Atom Builders is a free iPhone app and the requirements include iOS 5.0 or later and are compatible with iPhone, iPad, and the iPod touch.  The app has practice and play mode, is quite simple, and the game mode can become quite addictive. (@wwndtd currently has the high score) As mentioned, it’s simplistic and just involves selecting protons, neutrons, and electrons by scrolling through a number wheel to select the appropriate amount. With the ease of use, game mode, and the fact that it is free, I think it’s worth mentioning to your students. This could serve as great practice and review for this concept.  Note: I tried both the pHet Build an Atom after I had downloaded it and the Atom Builder app in airplane mode and both worked well on my iPhone without being connected to wifi.  The buttons on the atom builder were bigger to manipulate and easier to use than on the pHet simulation even in landscape mode, however, the pHet game has more options such as identifying the protons, neutrons, and electrons given a model of the atom and games involving the periodic table.

I decided to search the web looking up atom building software and came across this website from KScience that could also be useful for your students to use to practice in case your classroom is without mobile apple products. This website requires the user to drag and drop of protons, neutrons, and

electrons to fill in the nucleus and each of the energy levels. 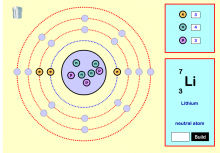 One way you could use this app would be to take snapshots of the image and then use that on assessments and then have the students fill in the correct information regarding the symbol, atomic, number, mass number, and charge.  Of course the size of the nucleus could be discussed as a common limitation with these models.

Another app that I found useful is entitled Nuclear by Escape Velocity Limited.

The app is free and does offer in-app purchases.  If you are trying to express to your students the concept of isotopes and then link that to nuclear chemistry,  this app could be helpful.  The app allows you to build atoms by adding protons, neutrons, and electrons and during the process if you add too many neutrons or too many protons then it will notify you that the isotope you created is unstable by showing a radioactive symbol. Next, if you don’t add more neutrons or protons quickly enough then you can watch as the atom shakes uncontrollably and then eventually decays into a more stable isotope. For my students the number one attraction is that the visual movement of the electrons is eye candy, to say the least. The number two attraction is that it helped them visualize that many of the elements like Carbon-14 are radioactive. Some only thought that radioactivity only existed with the larger elements such as elements 92 and above.