This decade, from 1910 to 1919, was defined by World War 1. The Allies included the United States, Russia, France, Britain, and Italy. They were opposed by the Central Powers of Germany, Austria-Hungary, Bulgaria and the Ottoman Empire. Other nations outside the reach of Europe were also involved. India, for example, had troops in Egypt, Gallipoli (part of modern Turkey), and German East Africa. India had almost three-quarters of a million soldiers that opposed troops from the Ottoman Empire. While a number of nations, such as Brazil, declared neutrality, the economies of these nations were often dramatically impacted by the war. China declared war against the German empire in 1917 but never sent troops to Europe. Chinese laborers did work for the British Empire during the war.

This conflict resulted in several Nobel Prizes in different fields not being awarded. It also limited travel and financial assistance for scientists and their labs, unless they were working on the war effort.  Sweden, the home of the Nobel Prize, was neutral but dependent on trade with countries on both side of the conflict. This decade did see the development of science at the atomic and molecular levels start to grow, and these developments made their way into other fields such as medicine, geology, energy and basic physics. Before atoms and molecules were known, chemicals were defined by properties, such as density, solubility, reactivity, color, magnetism, and their melting and freezing points. The neutron was still a decade away from being experimentally verified, but indirect evidence and theories about its existence started to appear in journals.

See our other Nobel Prize puzzles on ChemEd X!

The Nobel Prize is awarded every year in six disciplines; Chemistry, Physics, Medicine and Physiology, Literature, Peace, and Economics. Alfred Nobel, active as an inventor and businessperson, left a will in 1895, to acknowledge "those who, during the preceding year, have conferred the greatest benefit to humankind." Scientists can typically spend years or even decades developing their projects that can advance humanity. Once the concept or event has been brought into the public’s view, its impact is evaluated. The announcements of the year’s recipients take place in the fall of each year, with a ceremony held in Sweden typically in early December. The award includes a gold medallion, a diploma, and a significant monetary award. Awards are often correlated with popularity, as many Nobel Awards winners have been known to shape our society, from Watson and Cricks double helix structure of DNA and Marie Curie's work with radioactivity, to Jennifer Anne Soudan and Emmanuelle Charpentier work with CRISPR and Carolyn Bertozzi, Morten Meldal and Barry Sharpless (his 2nd Nobel Prize) for their work with click chemistry. We are working on a series of puzzles that will provide some introductory material on every Nobel Prize awarded from 1901 to 2022. In addition, some key concepts in the Nobel Award in medicine and physics with strong links to various areas of chemistry will also be included. These will range from Watson and Cricks model of DNA to the Bohr model of the atom.

Here you will find

Our first educational puzzle submitted to ChemEd X was developed during the pandemic and focused on infectious diseases (see Using an Abbreviation Puzzle as a Method to Familiarize Students with Infectious Diseases)1. It allows players to learn something about over 150 infectious diseases using a strategic method.

Recently we developed a novel puzzle that allows students to think strategically while familiarizing themselves with the elements and their symbols from the periodic table (see Turning Element Abbreviations into a Strategic Exercise). Read this post for more information about the educational benefits of using puzzles.

This series of puzzles can be completed individually or in groups, and it can be used in a classroom setting or given as homework. And don’t forget, there are always a few parents and other family members that might enjoy the activity. 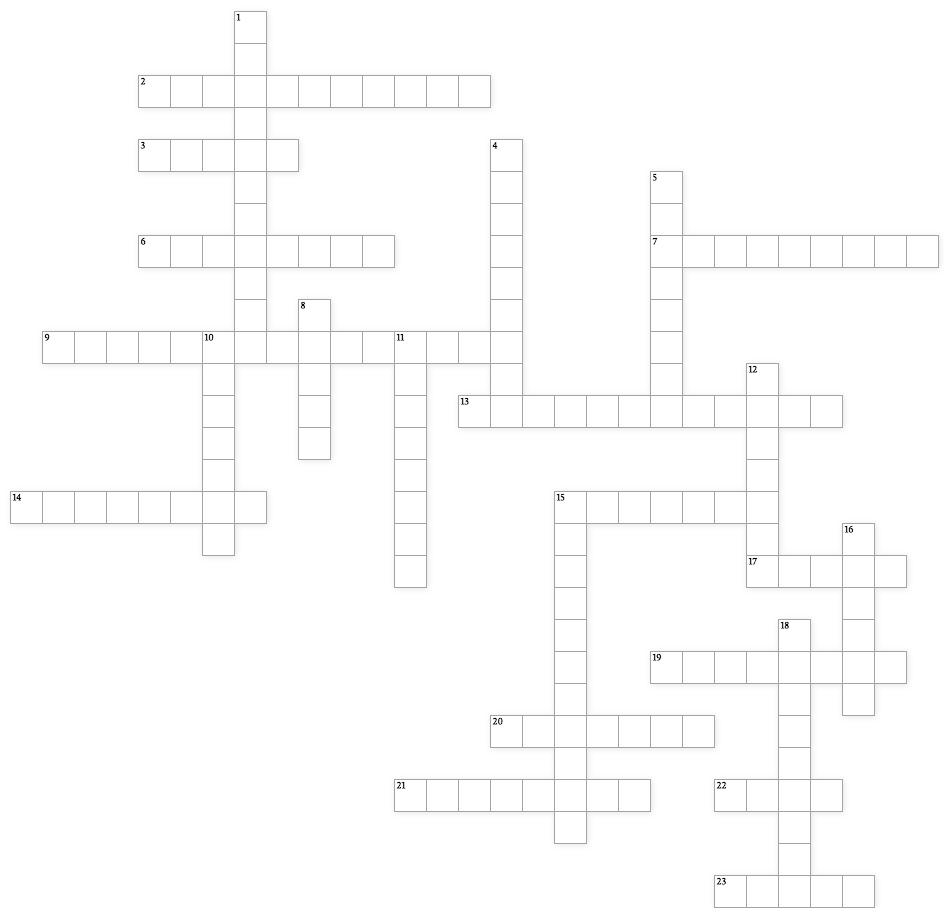 2. _______ is the green pigment in plants used to make food during photosynthesis. There are six types of _______, but type A is the most common structure and is found in plants and algae.

6. Paul ______ was awarded the 1912 Nobel Prize in chemistry. His research was focused on hydrogenating carbon containing compounds using powdered metal species, including nickel.

9. Theodore Richards’ pioneering work with atomic weights provided data that indicated _____ of elements existed. The existence of neutrons was not yet proven.

10. Alfred Werner, who lived in Zurich, did most of his pioneering with complexes that had a coordination number of  ______ .

13. The 1918 Nobel Laureate in Physics was awarded to Max Planck, but he actually received his prize one year later. His _________theory was used by Albert Einstein to help describe the photoelectric effect and by Neils Bohr to understand the atom. These concepts play a key role in chemists’ understanding of chemical reactions at atomic and molecular levels.

17. The 1913 Nobel Prize recipient in Medicine was Charles Richet for his work on ______.  _____ is a rapid, potentially life-threatening allergic reaction to something a patient is allergic to, such as peanuts or bee stings.

21. The 1913 Nobel Prize in Chemistry was awarded to Alfred ______.  Some of his pioneering work was focused on the discovery and explanation of optically-active isomers.

22. Alfred Werner worked with complexes that had a platinum ion (Pt(II)) as the central atom, and used chloride ions and ______ molecules. Currently, there is a widely used cancer drug called cis-plat that has two chloride ions and two ammonia molecules linked to the central cation, platinum (II).  Cis-plat has a square planar geometry.

1. Richard Martin _______ won the 1915 Nobel Prize for his innovative work with plant pigments. He was at Harvard University in Boston, Massachusetts. Today, when chlorophyll is used as a pigment it is called Natural Green 3 or E140.

5. The 1919 Nobel Prize in Physics was awarded to Johannes ____, in part for the splitting of spectral lines in an electric field.

7. The Stark effect, part of the 1919 Physics Prize, has been utilized by analytical chemists for the study of atomic spectra and ________ rotational spectra. Spectra is data based on electromagnetic radiation or light.

8. The 1911 Nobel Prize was the second prize awarded to Madame Curie. In 1903 she was awarded the Nobel Prize in physics, which she shared with her husband. The discovery of radioactivity in 1896 by Henri ________ inspired the Curies.

11. Theodore William ________won the Nobel Prize in 1914 for his work measuring the exact atomic weights of many elements known at that time.

12. The Planck constant, 6.626 x 10-34 ______-seconds, is used in the relationship in which the energy of electromagnetic radiation is equal to Planck’s constant times its frequency, shortened to the formula E = hv.

15. Victor ______ used magnesium metal as a reagent that helped smaller and simpler organic compounds to be combined and form larger species. His reagent is still widely used in chemistry.

16. The 1910 Nobel Prize was awarded to Otto ______. Early in his career he had an interest in terpenes, of which there are over 30,000 compounds that have been identified. They are typically isolated from plants.

18. The reaction of _______ gas with nitrogen gas to produce ammonia is called the Haber-Bosch process. It was critical for the economical synthesis of ammonia for fertilizers and certain explosives.

19. The 1911 Nobel Prize in chemistry was awarded for the discovery of radium and ____.  ____ was discovered in 1898 and is an alpha emitter. Alpha particles cannot penetrate a piece of paper.

21. The Nobel Prize in chemistry was not awarded in 1916. The Nobel committee only considers external nominations and does not seek potential winners on their own. During this time, ____ War 1 was being fought in Europe, and overall, there were fewer nominations and awardees.

Provide students with blank puzzle and clues. Note there are two versions available. Both versions include clues but the more advanced version does not include a word bank.